Aloe is considered an unpretentious plant and can withstand quite harsh climatic conditions, but sometimes it can still happen some troubles. I am going to tell you about one of such cases today.

Drought stress, scorching sun, extreme cold, or root rot from overwatering are the main causes of aloe leaves curling. To fix curling leaves, water the aloe immediately when the soil is 95-100% dry and move it to a location with 6 hours of the direct morning sun. Also, avoid locating the aloe in a place where the temperature can drop below 50°F and use a pot with drainage holes.

Drought stress as a result of underwatering 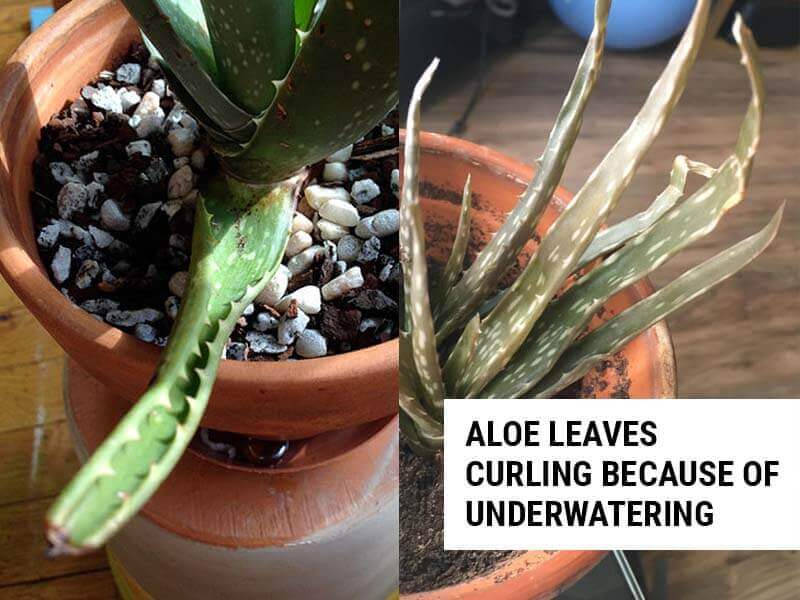 In most cases, drought stress is the main cause of the inward curling of aloe leaves. This is due to the common mistake that aloe needs infrequent watering. But this is only partly true.

Indeed, aloe is a desert plant and can tolerate prolonged periods of drought. After this period, it looks bad, to say the least. It shrivels and turns yellow. This is typical of most succulents.

In the house, the potting soil can dry out for several reasons. The first is that the plant uses up water for its needs. Two, the sun and high temperatures can quickly dry out the soil in the pot. Also, a fan or wind creates a lot of air movement that can cause the soil to dry out.

To remedy the situation you need to water the aloe with a generous amount of water. The soil should soak to the bottom of the pot and the excess water should flow out. Next, you need to constantly monitor the moisture content of the soil and not let the aloe stay in dry dirt for long periods of time.

The soil should dry out almost completely between waterings, but as soon as it dries out, water the aloe immediately. Use only deep watering with all of the soil soaking in. Avoid frequent shallow watering, which will do nothing but cause problems. 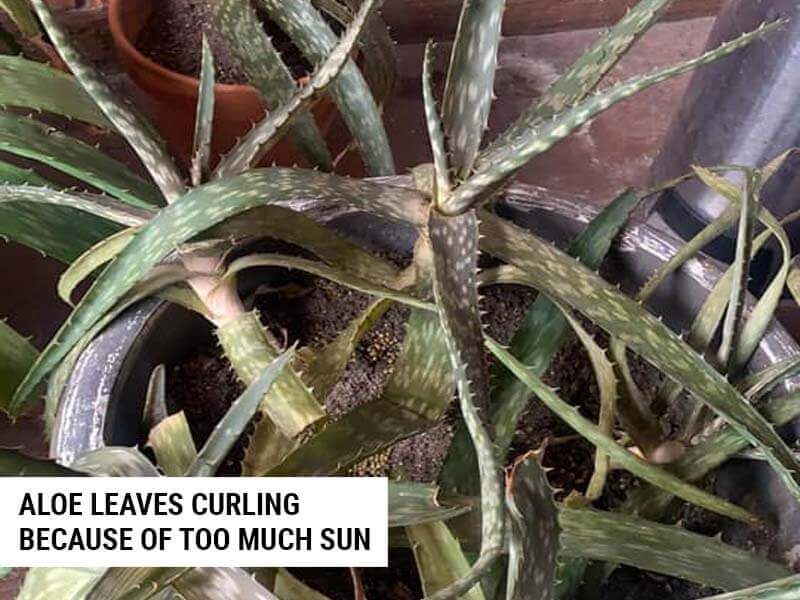 Aloe leaves curling because of too much sun.

The scorching sun all day can cause aloe leaves to curl up. Too much UV light can damage the cells of the plant and it tries to reduce the effect of the sun by deforming the leaf blade.

Hot winds make the problem even worse. If, for example, your aloe is growing outside and there was a warm wind on a full sunny day, the leaves can get burned. The leaves will curl inward and turn pale and then yellow.

To remedy the situation, you need to move the aloe to a less bright place. Since the aloe succulent still needs plenty of sunlight. Therefore, it is best if it gets at least 6 hours of direct sun and the rest of the time the light should be bright but indirect.

Move the pot with the aloe first to the east window and after a while to the south window and see how it reacts. This way you can determine the best location for your plant. 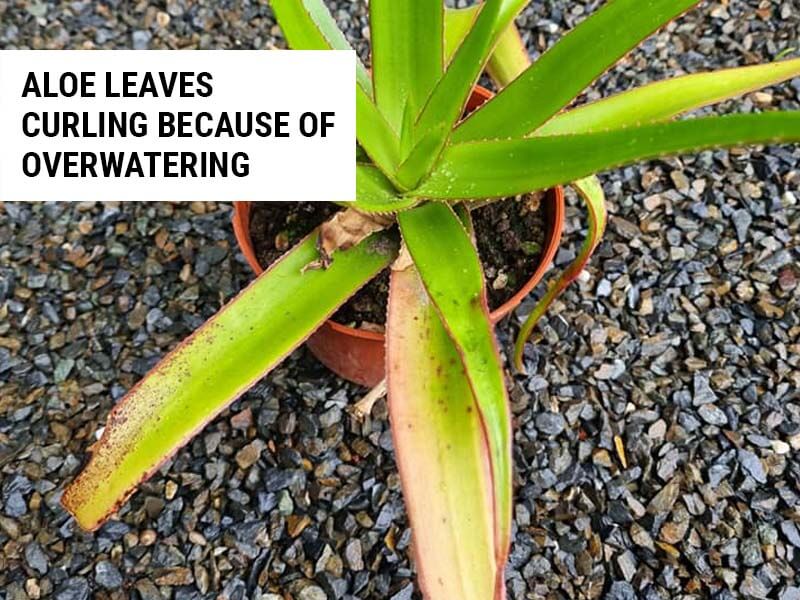 Aloe leaves curling because of overwatering

Root rot is a major problem in growing plants. It is not always possible to water correctly because each plant has its own water needs. If you have some different plants, you run the risk of underwatering some plants and overwatering others by watering them according to a schedule.

As a result of overwatering, the aloe roots are in the water for a long time, which causes oxygen deprivation and the plant does not function properly. In addition, root rot develops in humid conditions. If you do nothing, the rot will spread until it destroys the plant.

The symptoms of root rot are curling leaves outward (downward). Yellowing of the leaves is also possible. You may also notice an unpleasant odor coming from the pot.

In this case, you need to take the aloe out of the pot and clean off all the dirt. Then remove any dead roots and wash the wounds with hydrogen peroxide. Dry the plant in the shade for a few hours.

The next thing you need to do is plant the aloe in well-drained soil. We will talk more about what kind of soil to use later in this article. Also, be sure to use containers with plenty of drainage holes.

Put the pot in the shade, and when you can see that the plant is alive and showing its young leaves, you can gradually accustom it to the sun. Only water the aloe when the soil is almost completely dry. 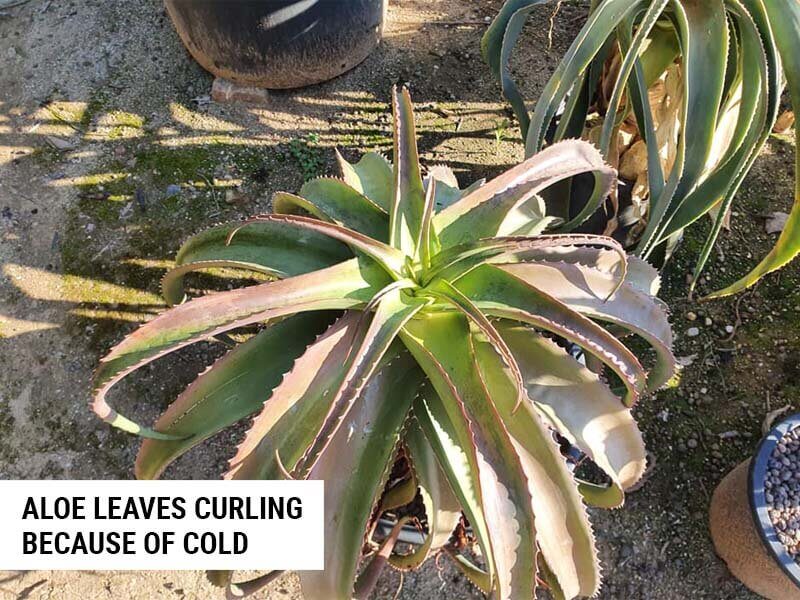 Aloe leaves curling because of cold.

A sudden cold snap can force aloes to curl their leaves. This sometimes happens if the aloe is growing outdoors. In the summertime, it may be hot and sunny during the day, but at night the thermometer may show below 50°F (10°C). Such a scenario is bound to result in curling and reddening of the leaves.

But do not think that it is only outdoors that aloe can be damaged by cold. Indoors some devices emit cold (refrigerator, air conditioner, etc.). If the aloe is placed close to these things, the leaves can be damaged.

To avoid such damage, keep the aloe away from appliances that emit cold and heat. If your aloe is growing outside or on a balcony, watch the weather forecast and move it indoors if it gets cold.

If temperature stress has occurred, all you can do is ease the conditions of recovery. To do this, move the aloe to a place with a minimum amount of direct sunlight for 1-2 weeks. Water the plant once more.

Lack of light can cause leaves curling 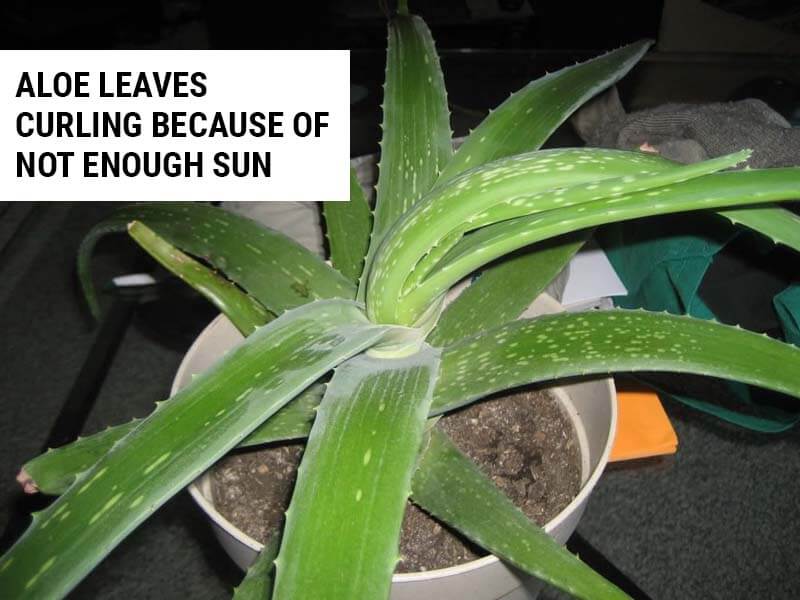 Aloe leaves curling because of not enough sunlight.

The sun’s rays are the source of energy for the process of photosynthesis. If the aloe does not get enough light, photosynthesis is done with internal energy reserves. As a result, the plant is exhausted and the leaves do not mature properly.

As a consequence of all the above, the leaves curl outward (sag down) and become brittle and soft. They also change to a light green color.

In addition, the lack of light begins to develop various diseases. We will talk about this in a separate chapter.

The obvious solution in this situation is to place the aloe in a sunnier location. As I mentioned earlier, the aloe needs 6 hours of sunlight per day. But I want to caution you not to put the aloe in full sun right away. As this can cause the leaves to burn.

First, move the aloe to the east window for 1-2 weeks and see how things go. If burns appear, move to the north window. But if all is well, move it to the south window.

If you don’t have a place with enough sunlight install artificial light. There are many examples of successful cultivation of aloe and other succulents under LED lights etc.

Succulents, due to the large amount of water in the leaves are often a victim of various fungal diseases. Aloe is no exception. If the disease affects your plant, in addition to deforming the leaves, brown spots or mold may appear on them.

Leaf distortion can occur in several different ways. The leaf can bend inward or outward. There may also be bumps or wrinkles. Very often the leaves become soft (watery) and produce a foul odor.

The causes of the disease are excessive watering, lack of air circulation around the plant, lack of sunlight, or a combination of all of these.

If the disease occurs, you need to take the aloe out of the pot and remove all the dirt. Examine the plant for damage and remove any rotten tissue. Spray the aloe with succulent fungicide. Next, plant the aloe in clean soil and place it in a bright place but not in direct sunlight.

The recovery process can take a considerable amount of time. Water the aloe moderately, and when you see that the plant begins to grow you can increase the watering little by little and accustom it to more light. If the disease does not go away, spray the aloe with fungicide again. 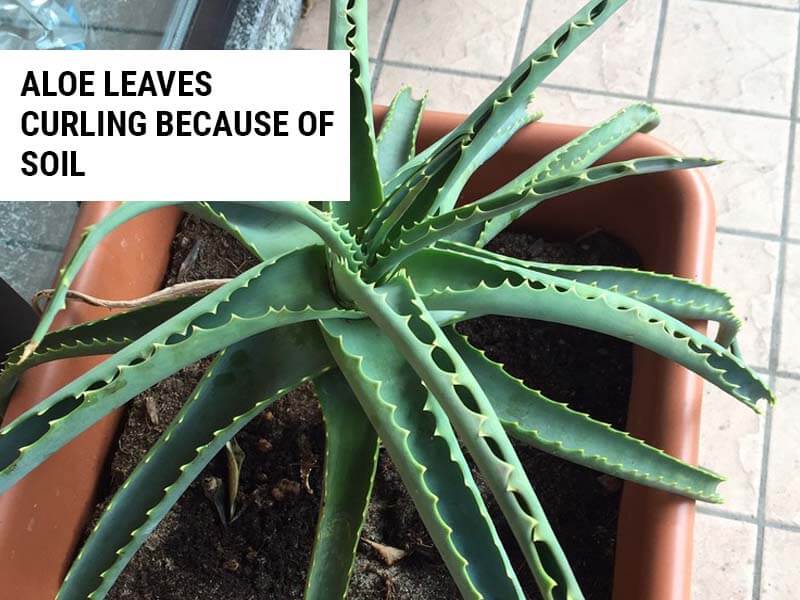 Aloe leaves curl because of soil.

There are some types of soil in which aloe will not grow well and you will always have problems.

The first type of soil is peat. Very often in nurseries, succulents are planted in peat. The advantage of this substrate is its lightness, but if it dries out it is very difficult to re-hydrate. The water you pour into the pot will run down the inside walls and the roots get nothing. As a result, the leaves will curl from underwatering.

The second type of soil is nutritious and moisture-intensive soil based on compost or other organic matter. In this soil, the roots will be constantly wet, which will inevitably lead to root rot and outward curling of the leaves. Also, excessive nutrients will stimulate the aloe to grow intensively and the plant might get stretched out and become soft.

In either case, the best solution is to transplant the aloe to well-drained soil without organic matter. You can easily find a good succulent potting mix on the market. Or you can make your own substrate with lots of perlite and small pebbles.