Dahlias are tubers that completely die in winter before sprouting again in spring. As they grow they can have issues that affect the health of the plant. Today, I will explain these factors and how to bring them back so they are in perfect health.

Too much or not enough water, pest insects, diseases, or the soil quality cause dahlia leaves to turn brown. To remedy brown leaves ensure the soil pH is 5.8 to 6.2, keep the soil slightly damp. Also, treat pests and diseases with neem oil, and move dahlia to a place where it will receive 6 hours of direct sunlight.

Leaves that have already turned brown will usually die, but applying the right fixes and identifying the issue will ensure it won’t happen on new growth and your dahlias will return back to perfect health.

Each of these issues can be identified by other symptoms dahlias will present, which will help you narrow down exactly what is causing the issue. So below I will provide the symptoms for each of the issues that can cause dahlia leaves to change color, as well as, what solutions to apply based on what’s causing it.

Overwatering can cause dahlia leaves to turn brown

In autumn and winter dahlias lose their leaves and flowers and completely die back leaving only the tuber in the ground. When they are dormant and beginning to die back they don’t need to be watered. Doing so can cause the roots to become soggy, and damage them.

This reduces the ability of the roots to take up water and nutrients. This can also occur in spring when they start producing shoots and growing again. When they are being overwatered the leaves will also turn yellow. On top of developing browning and dry crispy edges, and as the leaves completely die they will turn brown. 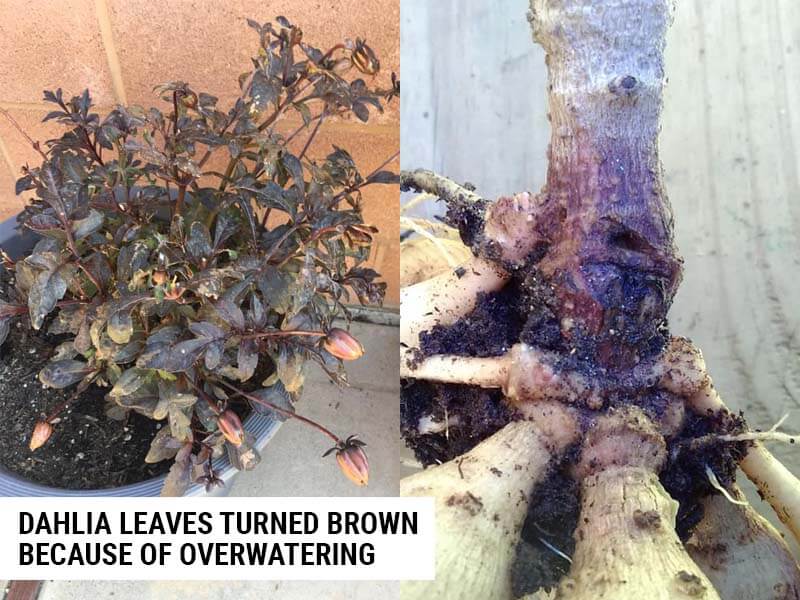 Compared to most other plants dahlias need quite a lot of water. This goes double if the soil isn’t very free-draining, and the water they do get doesn’t make its way into the soil and there is a lot of runoff.

When dahlias aren’t getting enough water the leaves start to turn yellow, the edges become brown, dry, and crumbly. And when this happens over a prolonged period the entire leaf will turn brown and die. 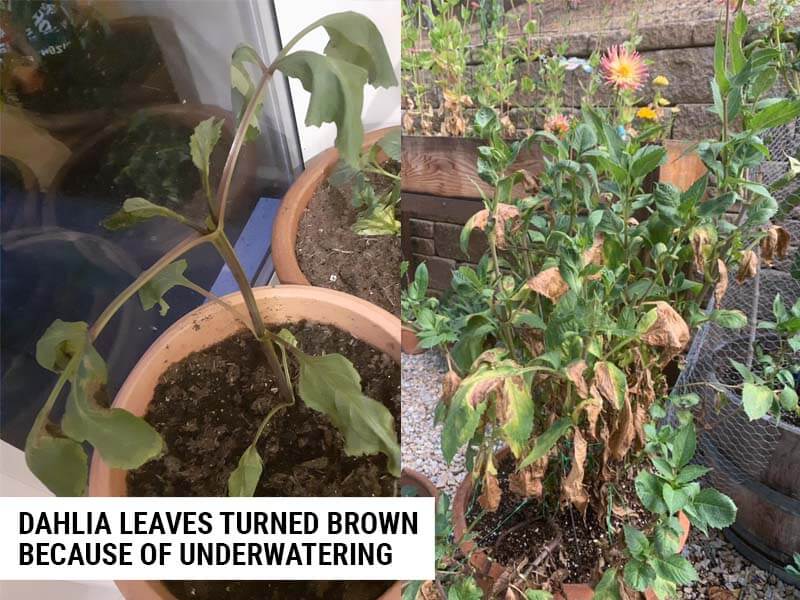 Sunlight is used by dahlias in chemical reactions that create energy for the plant to grow. When they don’t get enough sunlight they can struggle and this will show first as yellowing of the leaves, and then the leaves will turn brown, go dry and crispy, and fall off. Planting them in direct shade will cause dahlias to die.

They will get some reflected light which can allow them to live for a short time. But, with no direct sunlight, the leaves will turn brown and die.

Sunlight can also be an issue if you live in a climate that has particularly hot sun. Which can scorch the leaves and cause them to go brown on the edges. 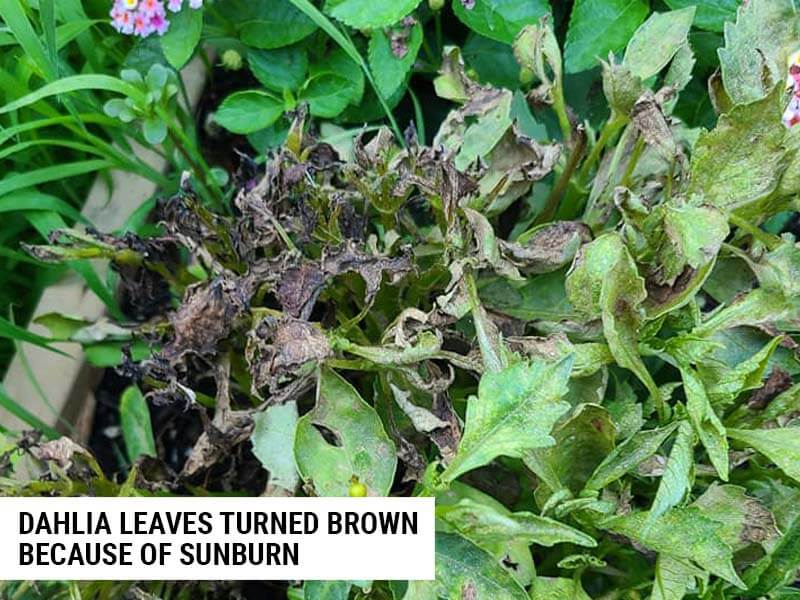 The pH of the soil controls what nutrients are available to be absorbed by plants. Where the pH is too high or too low the nutrients dahlias need won’t be available. If the soil is nutrient-poor such as unprepared regular garden soil or clayey soil the leaves of dahlias can also turn brown.

This can appear as yellowing of the leaves, and then the leaves will turn brown and die. But, also can appear as browning on the edges of the leaves. There are inexpensive pH soil testing kits available from garden supply stores and online that you can use to see what the pH of the soil is. 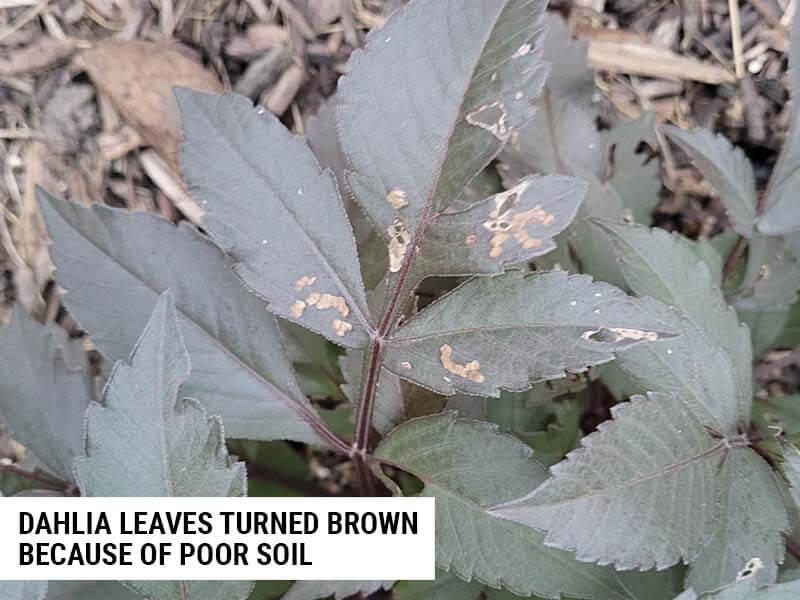 Various insects can infest dahlias and the leaves they affect will turn brown. Particularly common are mealy bugs, scale, and aphids. However, all pest insects can be treated in the same way. These insects will bite into the leaves and such out the nutrients. Some will also latch on permanently and remain in one spot for their whole life cycle.

These are quite easy to spot. On the stems, you will see bumps. These are the body of scale insects. They also produce a black crusty residue. On the underside of the leaves, you can also see spider web-like silk and tiny insects walking about. 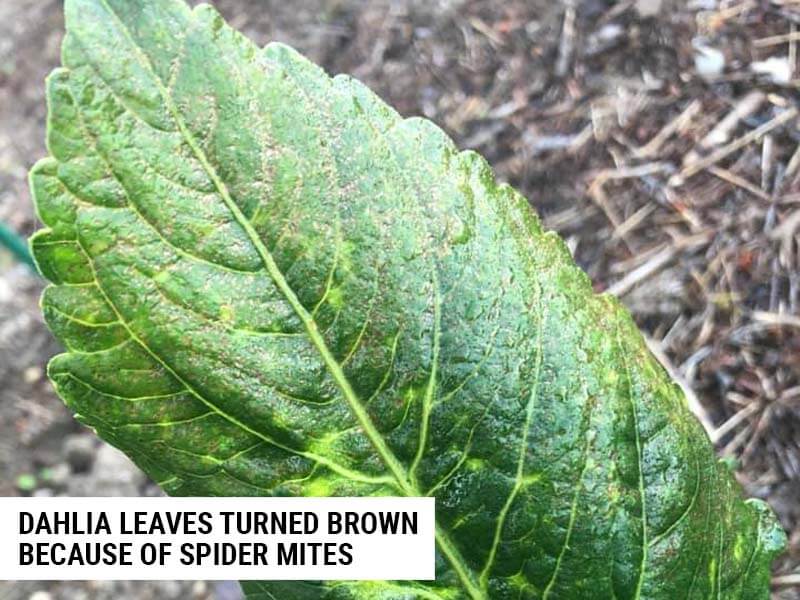 Fungal spores can settle on dahlias as they’re blown in by the wind. Once they take hold of the leaves they will begin to spread. They have tiny roots that embed themselves in the leaves and feed on the nutrients in the leaves. Over time the leaves will turn brown and completely dry. Where spotted early they can be treated before they damage the leaves.

The fungus will appear as a white or green residue on the surface of the leaves. Once it has taken hold you can see a small black spot surrounded by an area of a brown dead leaf. 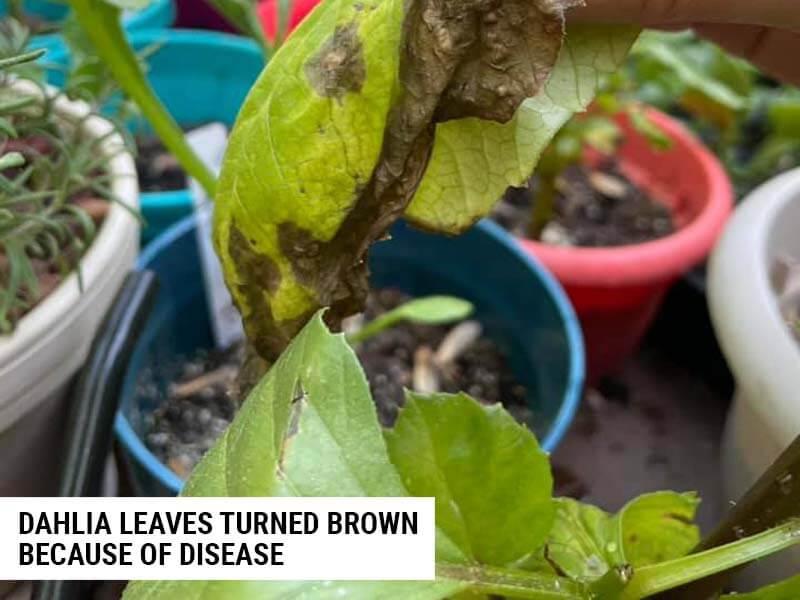