Pee Gee and Limelight are two similar and very popular hydrangeas. Quite often, they are even difficult to distinguish.

However, the differences between them still exist, and today we will talk about them.

Pee Gee is also known as Hydrangea paniculata ‘Grandiflora.’ This is an old variety that appeared in the middle of the 19th century. Since then, it has become perhaps the most common hydrangea. Homeland Pee Gee is Asia. However, today it can be found wherever there are suitable conditions for its cultivation.

This variety has the shape of a bush or a small tree. Tolerant to a wide range of climatic conditions and can grow in both full and partial sun.

Limelight also belongs to the panicle hydrangeas. The author of this variety is Peter Zwijnenburg (Europe). By crossing different varieties, he obtained excellent seedlings from which he selected Limelight. In the early ’90s, when this variety was born, it quickly spread throughout the United States and won many prestigious awards.

These days Limelight can be found in parks and gardens and just walking down the street. Many other beautiful varieties of hydrangeas envy its popularity. 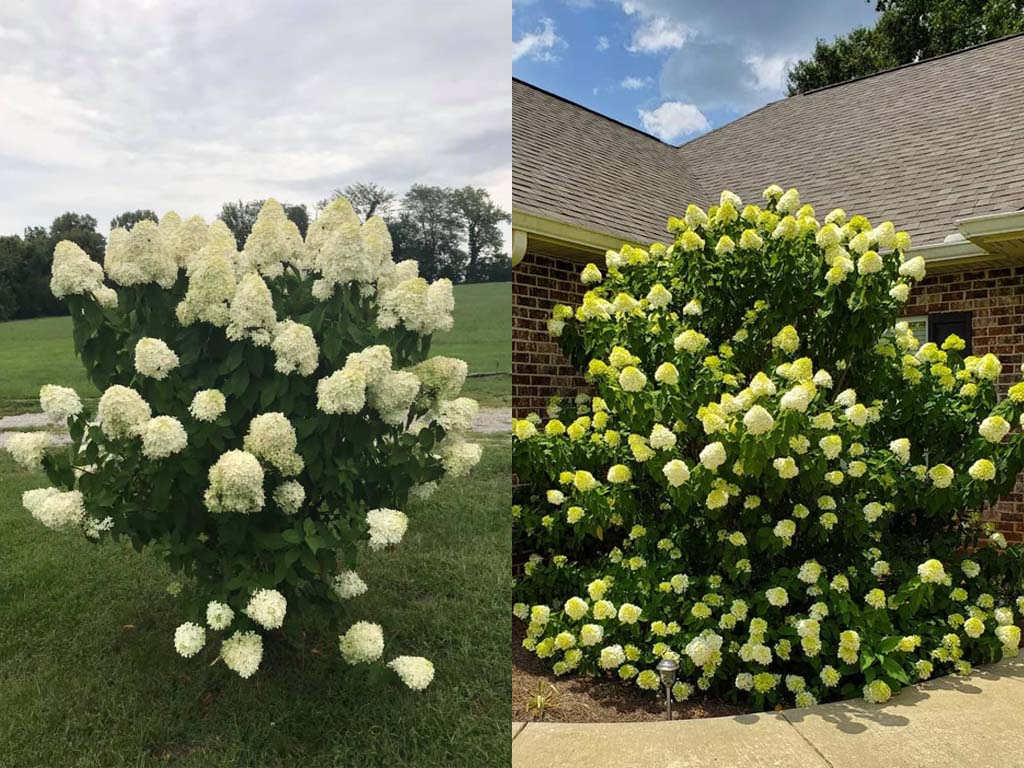 Pee Gee has a bigger size

Pee Gee is bigger than Limelight. After ten years of growing, it reaches about 10 feet in height, with a width of 8 feet.

However, there are examples when these hydrangeas reached a height of 20 or even 25 feet. It takes several decades for Pee Gee to achieve such a large size.

The size of the Limelight is much more modest. Its height rarely exceeds 8 feet and more often ranges from 6 to 6.5 feet. The width is slightly smaller.

Both of these hydrangeas can be pruned, so you can easily control their size. They can be pruned at any time because they bloom on young wood. Of course, except during the flowering period and the period of growing young shoots.

The most interesting thing is that although Limelight is smaller, it grows faster than Pee Gee. It increases by 2 feet per year. After reaching the maximum size, it slows down growth a bit.

Pee Gee’s growth rate is 1 foot per year, which is twice less than its competitor. But growth continues steadily, and over time it can reach large sizes.

So if you need a compact hydrangea, you better prefer Limelight. However, if you want a giant flowering tree in the yard, then choose Pee Gee.

By the way, Pee Gee, like all panicle hydrangeas, is perfect for creating a tree shape. To do this, you will have to remove the lower branches from time to time, but the result will be worth it.

The color range of Limelight is wider

Let’s talk about Pee Gee first. This variety begins to bloom in mid-summer with white-cream flowers. The color remains the same until autumn.

Limelight also belongs to the hydrangeas that bloom in the second half of summer. However, at the beginning of flowering, flowers have an unusual light green color (lime). Due to this color, this variety got its name.

In late summer (second half of August), Limelight flowers begin to turn white. And by mid-autumn, they are repainted in pink, i.e., change color like Pee Gee.

Given that Limelight shows three colors at different times of the year, it looks more advantageous than the competitor. This is especially true at the beginning of flowering; the flowers’ lime color is a spectacular view. Unfortunately, Pee Gee can’t give this.

All you need to do is give the plant at least 4-6 hours of direct sunlight to get beautiful flowers.

However, if you want, you can get panicles 18 inches (45 cm) long. To achieve this goal, you need to thin the plant, i.e., remove part of the branches (not more than 5-9 branches) on which there are flower buds.

As a result, the plant will spend more energy on the formation of larger panicles.

Limelight has smaller inflorescences. Their average size is 6-8 inches (15-20 cm). As with the Pee Gee, the lower panicles are slightly larger than the upper ones. By pruning part of the branches, you can achieve 12 inches (30 cm).

So due to the large size of the inflorescences, Pee Gee is lusher than Limelight.

Pee Gee can be grown from 3 to 8 USDA zones. This means that it is available to almost all US gardeners.

On the other hand, Limelight can also be kept from 3 climatic zones and up to 9. This means that this variety tolerates the heat of the southern United States a little better than its competitor and, as a result, is available to more gardeners.

Besides, Limelight is grown in Canada. The climate in this country is more severe than in the United States. This is not a significant advantage, but still.

In general, Limelight is more durable and tolerates a broader range of climatic conditions.

A small disadvantage of Pee Gee is that it tends to lie down. Large panicles look beautiful, but their weight is often the cause of sloping branches.

Limelight also has a similar problem, but its panicles are lighter, so it does not lie out as often. This usually happens after heavy rain and wind.

On the other hand, Pee Gee can bend to the ground even in calm weather.

So Limelight has slightly stronger branches that bend less. However, everything can be solved by installing support for the plant.

We have already considered the differences between Pee Gee and Limelight, but do they have anything in common?

Yes, first of all, they need enough sunlight because, in full shade, they will grow poorly. It is best to plant them in a place where there will be at least 4-6 hours of direct sunlight in the morning and afternoon shade.

The advantage of these varieties is that they can tolerate full sun, unlike bigleaf hydrangeas, for example.

Pee Gee and Limelight also need regular watering. This is especially true in the first and second years after planting or transplanting. The amount of water should be about 1 gallon for each plant. Try not to overwater the plants because otherwise, the leaves of Pee Gee and Limelight hydrangeas can turn yellow.

To get good flowering, you need to fertilize these hydrangeas once a year with a slow-release fertilizer. It is best to do this in the spring.

From time to time, prune old and dead branches. You need to clean the plants of old leaves and other plant debris.

These two respond very well to mulching. It will be useful if you pour a layer of mulch 1-2 inches thick. The area of ​​the mulched surface should be equal to the width of the hydrangea.