The narrow leaves of the Yucca on the long trunks look just delightful. This tropical plant brings something new into the home, thus dispelling the boredom of everyday life. As this plant does not grow in cold climates, it is sometimes a problem to grow indoors.

Overwatering, cold air, too much or not enough light, transplanting, insects or disease are the main reasons why the Yucca plant is dying. To revive the Yucca, water at the earliest when the soil is 15% dry, give it 5 hours of direct sunlight. When replanting, avoid root damage, use a well-drained substrate and pots with drainage holes.

Overwatering or not enough water 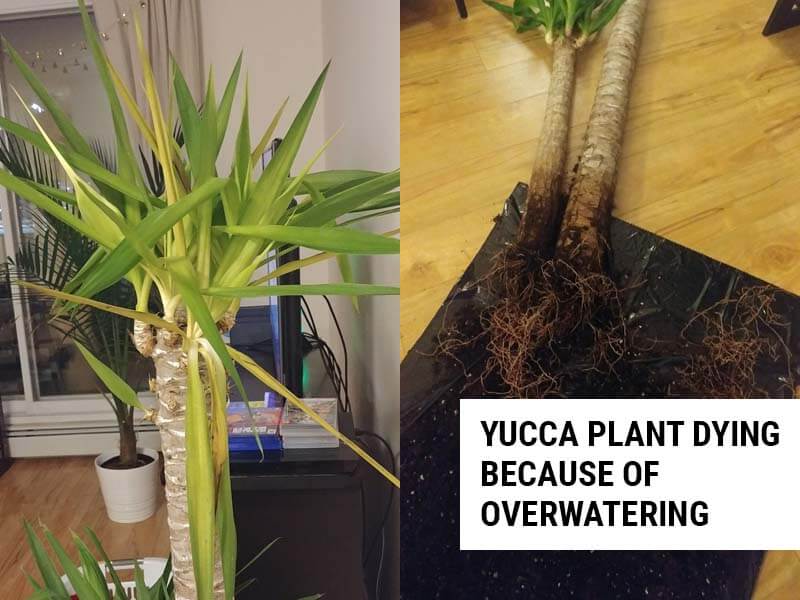 Yucca plant dying because of overwatering.

Very often watering Yucca on a schedule leads to overwatering. If the roots of the plant are in the wet soil for a long time, root rot begins.

As a result of root rot, the leaves will turn yellow and droop. You may also notice an unnatural discoloration near the base of the trunk, it may even be soft. The plant is slowly dying and if you do nothing, you will lose it.

If you notice the above signs on your Yucca plant, you need to take it out of the pot and clean all the roots. If you see rotten tissue, gently remove it. Then wash the wounds with hydrogen peroxide or fungicide.

Pot the plant in sterile, well-drained soil. Pots should have large drainage holes. Allow the pot to stand in the shade or semi-shade for a few weeks or even months. It doesn’t need scorching sunlight while it’s recovering.

To avoid root rot in the future, water the Yucca no sooner than the soil in the pot is 2 inches deep. But give it enough water to keep the potting soil well hydrated.

Also, a lack of water can cause Yucca to die. To avoid this, the soil in the pot should not dry out more than half of it. 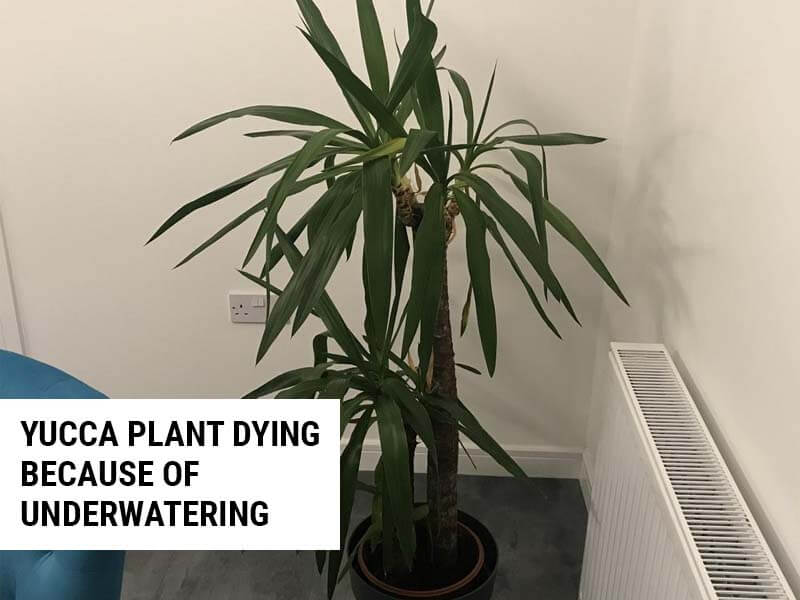 Yucca plant dying because of underwatering.

Yucca is a heat-loving plant and cannot grow outside in cold climates. The best temperature for growing would be between 64°F (18°C) and 77°F (25°C). In these conditions, it will thrive and you are unlikely to have problems. This plant can also tolerate 90°F (30°C) but will have reduced growth.

As for the lower threshold, it’s best not to let the temperature drop below 10°F (50°C). If the ambient temperature is less than 45°F (7°C) the plant may become damaged.

This often happens if you take the Yucca outside in the summer. It is often too cold at night and the plant can become temperature stressed and begin to die. The first signs are redness and drooping of the leaves. Then they turn yellow and die off.

To remedy this, move the Yucca to a more sheltered and warmer place where there is no direct sunlight. Water it moderately and if you are lucky the plant will recover after a while.

In the future, never take the Yucca outside or on a balcony if there is a risk of a sudden cold snap. 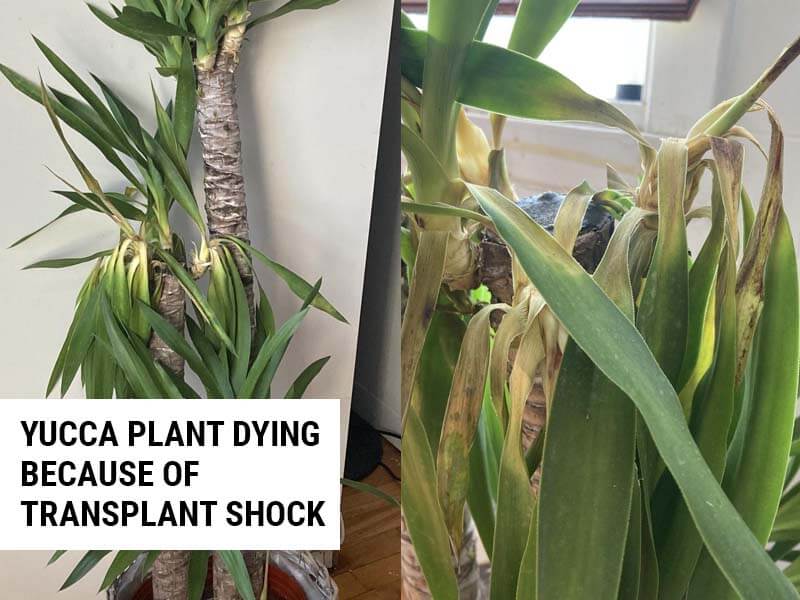 When you buy a Yucca and bring it home, don’t be completely sure it’s done. The conditions in your home may be very different from the conditions in which the plant is used to grow. A drastic change in growing conditions often results in stress that can lead to the loss of the plant.

The same goes for transplanting and moving Yucca to a different location. When replanting, you can damage or disturb the root system and the plant will get transplant shock.

The first thing you should do after you buy a Yucca is not to transplant it immediately into a new pot. Place the plant in partial shade and let it stand like that for a while.

If it is okay after 2 weeks, transplant it in a bigger pot so that the roots don’t get tangled up. Water the Yucca as I wrote above. If nothing happens after a week gradually increase the amount of light to the most comfortable level for the plant. 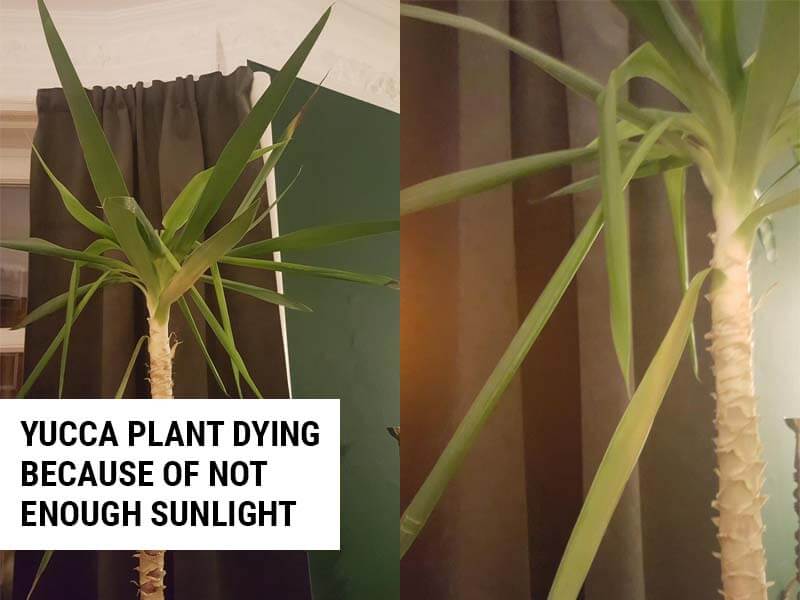 Yucca plant dying because of not enough sunlight.

One possible cause of Yucca dying is insufficient sunlight. In general, it is a light-loving plant and it requires the maximum amount of sunlight. But very often owners make the mistake of placing it in a dark corner or in the back of the room.

If there is not enough light, the Yucca will grow a little more vigorously at first but then its leaves will become brittle and begin to break up. Also in due course, the leaves will start to turn yellow and the plant will die.

To avoid this you have to move the Yucca to a place where it gets at least 4-6 hours of direct sunlight per day. But don’t do it right away, get it used to the sun gradually. Otherwise, the leaves can get burnt, and we’ll talk about that below. 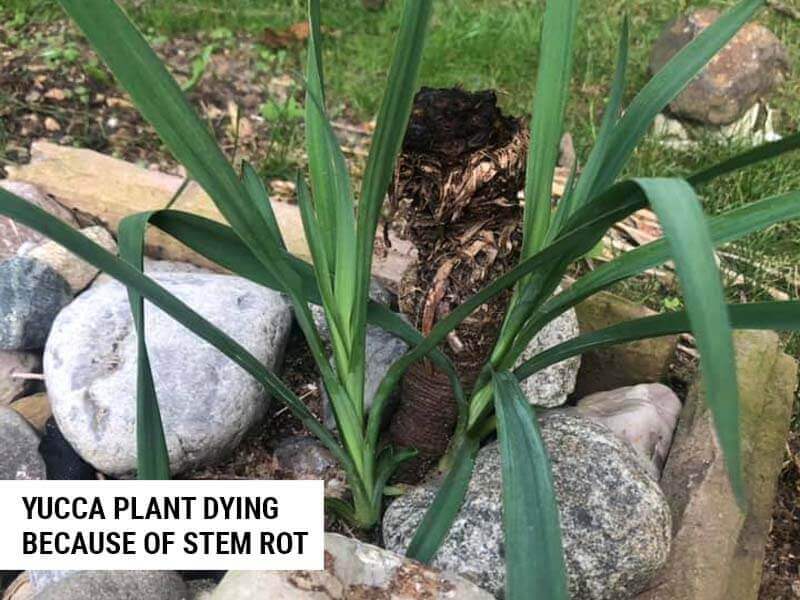 The disease is another possible cause of the Yucca plant dying. The most common disease is root rot from overwatering, which I already told you about earlier.

The next threat is fungal diseases and blight. Most often they affect a weakened plant as a result of improper care. Leaves can become spotty or necrotic, and wilt. If you do nothing, you can lose the plant.

To remedy the situation, you need to spray the diseased plant with a fungicide. Repeat the spraying if necessary. Also, there should be good ventilation around the plant.

Water the plant moderately as I mentioned above. Also give it enough sunlight, since the lack of UV light can cause widespread disease. 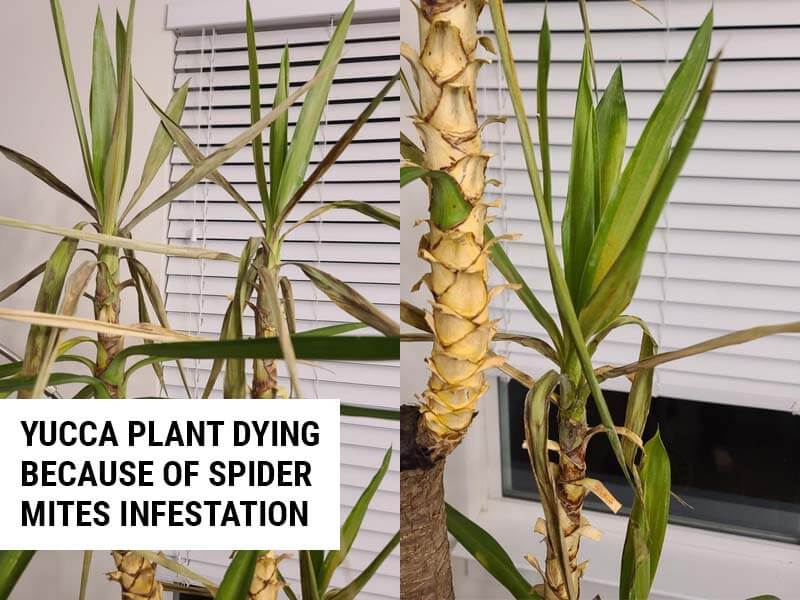 Pests can also be a serious threat to your Yucca. If the number of pests is small, the plant is unlikely to die, but if there are a lot of them, it can lead to loss of the plant.

The first type of pests are insects, such as aphids, mealybugs, and scale. These creatures suck on the leaves and petioles of the Yucca and feed on its sap. As a result, the leaves begin to turn yellow.

The most effective way to get rid of the pests is to spray the plant with horticultural oil. You will need to spray it several times. If the pests don’t go away, you have to apply a pesticide.

The second type of pest is spider mites. They are small white or reddish-white creatures that weave a thin web. They also feed on the sap of the plant. To rid the Yucca of them, you need to spray the plant with a special product called acaricide.

Excess fertilizer can lead to plant loss. This is especially true in the case of nitrogen fertilizers. Large amounts of nitrogen will cause rapid growth of the greens, but the leaves and stems will not mature properly. As a result, Yucca will become brittle and susceptible to disease.

Also, too much phosphorus and potassium can damage the root system. In this case, the leaves will droop and turn yellow. If nothing is done, the plant can die.

If you fertilize the Yucca too much and it dies, the first thing to do is to water it heavily Do this over a large tray so that the excess water drains out through the drainage holes. This will flush some of the fertilizer out of the soil.

After a while, transplant the Yucca into less fertilized soil. Then fertilize no more than 2-3 times during the year. The first time in early spring, the second time in late spring, and the third time in mid-summer. Do not fertilize Yucca for the winter.

Too much sunburn can kill the Yucca plant. This sometimes happens when owners move it outside in the summer. Prior to this, the Yucca was growing indoors and receiving a small amount of diffused sunlight, and then suddenly direct sunlight begins to illuminate the leaves all day long.

As a result, the leaves, unused to direct sunlight, begin to burn, curl, and yellow or white spots may appear on them. If the burn is severe, the Yucca will lose all of its leaves and die.

To avoid this, you should always gradually accustom Yucca to the new sun exposure. This means that you have to move the pot about once a week to a brighter and brighter place.