Today’s two competitors belong to the species Hydrangea paniculata and inherit very lush white clusters of flowers and bright green foliage. But even between them, there is some difference. Bobo is the result of a cross between Limelight and Little Lime. Looking ahead I can say that Bobo is a slightly improved version of its parents.

Both of these plants have a wide range of uses. They look very beautiful as specimen plants and thanks to their compact size they can be grown in pots. Also, they are very often used as a hedge.

In this post, we will discuss all their characteristics so that you can choose the most suitable plant for your garden. 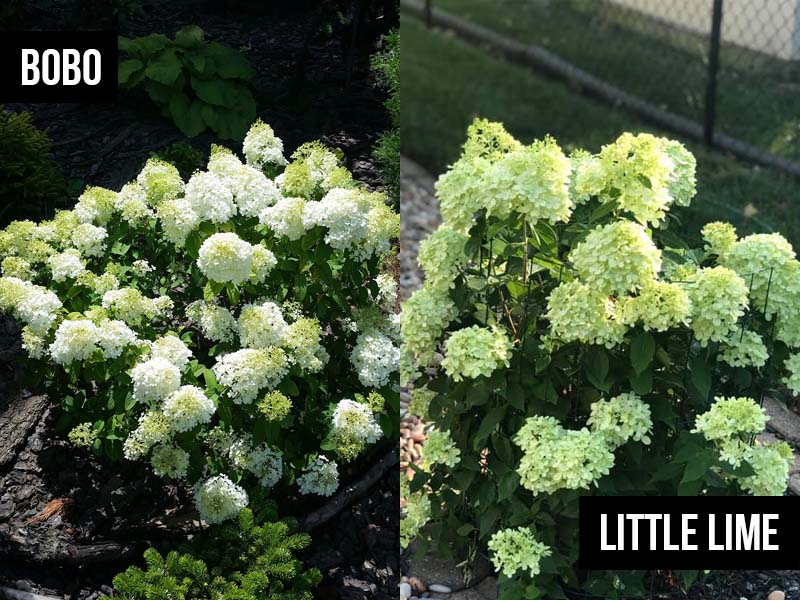 The color is different

The color of these two hydrangeas is different. Of course, their colors are close to white, but still, there is a difference.

Let’s start with Little Lime. At the beginning of flowering, it has a bright light green color. Closer to the middle of the season it becomes a little paler, but still, the lime color remains. In late summer or early fall, this hydrangea turns pink.

Bobo, on the other hand, also has a slightly greenish hue at the start but very quickly turns snow-white. In the middle of the season the color is not so bright but a little creamy. Closer to fall, this hydrangea, like its competitor, turns into a bright pink beauty.

From all this, we can conclude that from the beginning to the middle of flowering, these cultivars have different colors. Which color is better for you to decide, personally I like the pure white flowers of Bobo.

Little Lime is larger than its competitor. This variety grows up to 5 feet tall at maturity. The width is slightly greater than the height (6 feet).

Bobo, on the other hand, rarely exceeds 3 feet in height and 4 feet in width.

To reach this size you need to water and feed them. We will discuss this in more detail in the last chapter.

Another important difference is that Little Lime grows faster than Bobo.

All these characteristics have a direct influence on the use of these hydrangeas. If you want a tall hedge, for example, Little Lime is a good choice. In that case, you will quickly get a screen from neighbors or a driveway. You will also need fewer Little Lime hydrangeas to create a hedge.

If you want a low hedge that divides the garden but does not want to bother with pruning, go with Bobo hydrangea. Besides, this cultivar is better suited as a specimen plant or as a container plant.

Little Lime, on the other hand, blooms 7 to 10 days later. Usually, it is not until the second half of July at the earliest. But in the southern states with a warm spring, this hydrangea can show flowers even in early summer but at the same time, Bobo will bloom in the third decade of May.

It is also worth mentioning that Bobo blooms with more flowers than Little Lime. I wouldn’t say there are much more flower clusters, but since Bobo is smaller, the difference is noticeable.

Aside from the differences, Bobo Hydrangea and Little Lime have the same needs, and care for them is generally very similar.

First of all, to get beautiful dense flowers you need to provide these hydrangeas with enough light. In northern states, they need at least eight hours of direct sunlight. In the south, six hours will be enough. Like most hydrangeas, these two prefer the morning sun to the afternoon.

The second is the soil. For hydrangeas to thrive they need loose and drained soil. This can be achieved by adding 15-20% good quality compost to garden soil. Make sure that the pH is no higher than 7.0, as Bobo Hydrangea and Little Lime leaves may turn yellow in alkaline soil.

Next, water hydrangeas at least once a week, but only when it is not raining. In severe droughts, water 2 or even 3 times a week. The soil around the shrubs should not dry out more than an inch.

Feed Bobo and Little Lime at least once a year. It is best done with a slow-release fertilizer with lots of phosphorus. It is phosphorus that will help hydrangeas have big, beautiful flowers. Avoid nitrogen-rich fertilizers, since nitrogen encourages foliage growth.

Be sure to mulch your hydrangea bushes. Mulch has many advantages, mainly it keeps moisture in the ground. The best mulch is compost and pine bark. A layer of mulch should be 1 to 2 inches. There should be a space of at least 1 inch between the base of the hydrangea stems and the mulch.

Unfortunately, all hydrangeas are susceptible to disease and pests. Today’s two varieties are no exception. So you need to keep a close eye on your plants and take action immediately if there are problems. Or you can sprinkle them with a solution of fumigation and pesticide without waiting for trouble.