Today we will talk about entirely different but at the same time very similar plants.

Wisteria and lilac have many common features and many differences. The differences are not only in appearance but also in the method of cultivation and taxonomy.

Let’s start with the taxonomy.

As you can guess from the names, they are mainly common in Asia and the United States. Throughout the history of cultivation of these plants, many ornamental varieties with excellent appearance have been bred.

Syringa (the scientific name for lilac) is a genus of flowering trees with about 20 species. The exact number of species is unknown because the taxonomy has not yet been established, and botanists continue to identify new species.

In addition to more species, lilac has more than a dozen interspecific hybrids. All this gives a much larger number of forms and varieties of lilac than in wisteria. And it is the first major difference between these two.

In the wild, lilac is widespread in Europe and East Asia. The most common species are Syringa vulgaris (Common lilac), Syringa pubescens, Syringa meyeri. 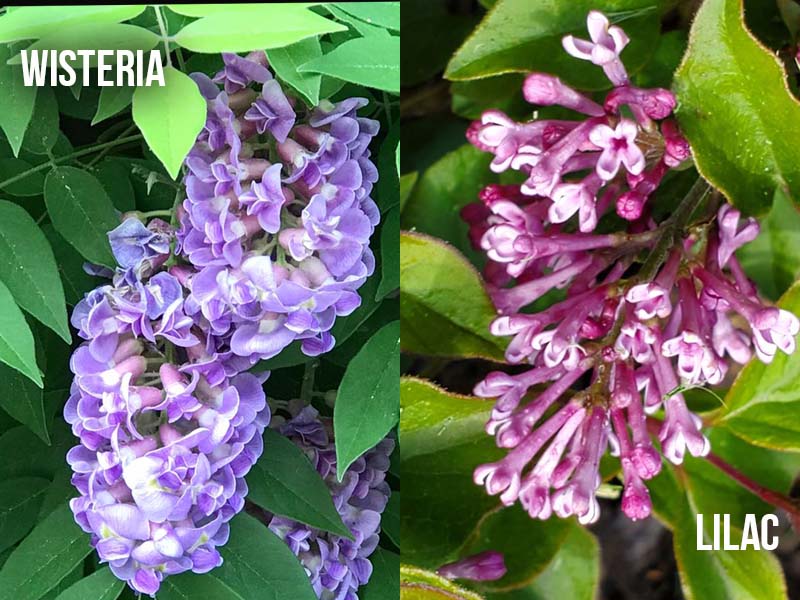 Due to the larger number of varieties, lilac has a wider range of colors. The primary colors of most varieties of lilac are purple, pink, or purple-pink.

But there are many others, such as Miss Ellen Wilmott or Madame Lemoine, who have snow-white flowers. And Primrose Lilac even has light yellow flowers.

There are also varieties of red lilac; the most famous are Tinkerbelle, Prince Wolkonsky, and Ludwig Spaeth.

On the other hand, wisteria has only blue and purple-blue varieties. Among them, Blue Moon (blue) and Amethyst Falls (purple) deserve special attention. Also, you can find white wisteria, but it is not a very widespread plant. Wisteria with red or yellow colors does not yet exist.

From the above, it follows that lilac can offer more options to choose from. There is also a blue lilac, and its name is California Lilac. Although this plant does not belong to the species Syringa, it is still considered as lilac.

Their blooming is different

These two plants have entirely different types of flowering.

Wisteria has clusters of flowers that grow to the bottom, while lilac inflorescences grow up. Besides, wisteria racemes are on average longer, and this creates a beautiful effect of weeping inflorescences. For example, Wisteria floribunda ‘Alba’ has white flower clusters 24 inches (60 cm) long!

Lilac inflorescences, which extend upward, more like panicles of hydrangea paniculata. But, they are not so long and not so sharp as in hydrangea.

The next difference is the flowers. Wisteria has larger flowers than lilac, and this makes the flowering more pronounced. However, lilac has more flowers in the inflorescences, which makes its inflorescences denser and lusher.

Here it isn’t easy to judge which of them looks better. Both lilac and wisteria have beautiful blooms, and which one to choose depends on the gardener’s individual taste.

Wisteria has a longer blooming period

Lilac usually bloom in late spring or early summer, depending on climate and weather conditions. The flowering of most varieties of lilac lasts two weeks. Of course, some varieties bloom for a little shorter period. For example, Miss Kim bloom only for ten days.

Simultaneously, wisteria blooms in early spring for 3-4 weeks, so you can get flowers earlier and for a more extended period.

Also, wisteria has one more advantage. The fact is that some wisteria has a high tendency to reblooming. For example, Wisteria Blue Moon can bloom even three times a season. It occurs in spring, mid and late summer.

Some lilacs also tend to re-bloom, but this tendency is not as pronounced as in wisteria.

But wisteria has one disadvantage here. It may not bloom for several years after planting, while lilac may bloom the following year after you plant it.

Lilac is better able to withstand low temperatures. It can be grown from 3 to 8 hardiness zones. However, in the south, not all species of lilac feel equally good. It is best if you grow them no further than zone 7.

On the other hand, wisteria is a more heat-loving plant. It is recommended to grow from 4 to 9 climatic zones.

In the north in zone 4, it is recommended to grow only wisteria Blue Moon, and even with this variety, there may be problems. Therefore, it is best to grow wisteria from 5 to 9 zones.

They have different growth habits

The growth habit and size of these two plants are different, so let’s dig into it a bit.

Wisteria has a climbing growth habit. This means that this plant needs support on which it will climb up.

The fact is that the wisteria does not have a central trunk, and its multiple trunks are very thin and unable to hold significant weight. As a result, wisteria seeks to support and can climb 65 feet in height.

In nurseries, wisteria is often formed as a single-stemmed tree by weaving thin trunks with a braid. Typically, such trees are up to 10 feet in height and can be quite broad, 10-15 feet. But the more extensive the canopy, the more side supports will be required.

Lilac also does not have a central trunk, but its multiple trunks are quite strong and can withstand the weight of leaves, branches, and flowers. Therefore, lilac has the shape of a classic tree or a large bush.

Today you can even find dwarf lilacs. For example, Dwarf Korean Lilac does not exceed 6 feet in height and has a spherical shape.

So lilac is more like a tree or a bush, while wisteria is a vine. In my opinion, with enough patience and experience, wisteria can turn into a unique spectacle that will be way better than lilac.

The leaves of wisteria and lilac are completely different, and this determines the scope of their application.

Wisteria leaves grow on thin leafy shoots that connect with the main branches. The leaves are arranged in pairs and form an unusual “ribbed” pattern resembling fern leaves.

The leaves are elongated and pointed on both sides. The color is green or dark green.

Leaf shoots under the leaves’ weight bend down and, with flowers, form an excellent weeping effect.

On the other hand, lilac leaves have a heart shape, and it is wider but shorter than the leaves of wisteria.

Also, lilac does not have long leaf branches, and all the leaves are attached to thick, woody branches. As a result, the leaves do not hang down as in wisteria.

All these characteristics make wisteria more suitable for the creation of hedges. With climbing growth habit and lusher foliage, you can quickly create a live screen from your neighbors.

With lilac to do this will be more difficult because its branches are directed upwards, and the lower part of the plant usually has no foliage.

An exception may be dwarf lilacs growing in the shape of a ball. Using them, you can also create a hedge, but it will be more challenging than with wisteria.

Wisteria tolerates pruning well. This plant blooms on new wood so that you can prune it at any time except during the flowering period.

The more often you prune wisteria, the more branched it will be. Besides, pruning will stimulate the formation of larger flowers.

With lilac, everything is a little more complicated. It blooms on old wood, so if you prune it at the wrong time, it will not bloom.

The best time to prune lilacs immediately after flowering (usually early summer). After that, the plant will form flower buds, and they will bloom next year.

Also, you need to remember that too much pruning of lilac will lead to the growth of many suckers. Suckers are young shoots that grow at the bottom of the trunk and suck energy from the tree and give nothing in return. As a result, you will have to remove them regularly.

Chinese and Japanese wisteria are considered invasive in the United States. This means that they very aggressively occupy the area and displace other plants from there.

American wisteria and Kentucky wisteria are less invasive but they can also cause you a lot of trouble.

You should not plant any wisteria close to buildings as they penetrate every hole or crack and can damage the building. For the same reason, the framework for wisteria must be strong.

You will also need to prune the wisteria frequently to control it. In the opposite case, you can get not what you expected.

In this regard, lilac looks more attractive, it is not so aggressive and it will be less trouble.

Both wisteria and lilac do not like overwatering, but lilac is a little more sensitive to the amount of water.

It is best if you water the lilac no more than once a week during a drought. Usually, watering is required in the first 2-3 years after planting, and then lilac can not be watered at all. An exception may be too dry summer.

However, with excess watering or rain, lilac may not bloom, it will not die, but you will not get flowers from it. So be careful not to give lilac too much water.

There is nothing you can do during periods of heavy rains, so you will have to accept that you will not see lilac blooms this year.

Wisteria is considered a drought-tolerant plant, but it still needs water for good flowering, so water it once a week. The soil around the plant should not dry out more than an inch.

We have already considered all the main differences, so let’s talk a little about the similarities between wisteria and lilac.

For flowering plants, top dressing is important because flowering and seed formation requires a lot of energy. Fertilize lilac and wisteria once a year in the spring, and it is best to use slow-release fertilizers. Avoid fertilizers with a high nitrogen content as this element stimulates the growth of foliage and not flowers.

It will be nice if you mulch the circle around the plant with compost. This material will protect the soil from excessive drying and heating. The mulch mustn’t touch the stem of the plant.

Although lilac and wisteria are considered disease-resistant plants, I still recommend spraying them with a fungicide and pesticide at least once a year. You need to avoid spraying during the flowering period.