Today we are going to look at two wonderful maples, Red Sunset Maple and Autumn Blaze Maple. They are so widely used that there seems to be no worthy competitor for them. So which one is better? I will try to answer this question in as much depth as possible. 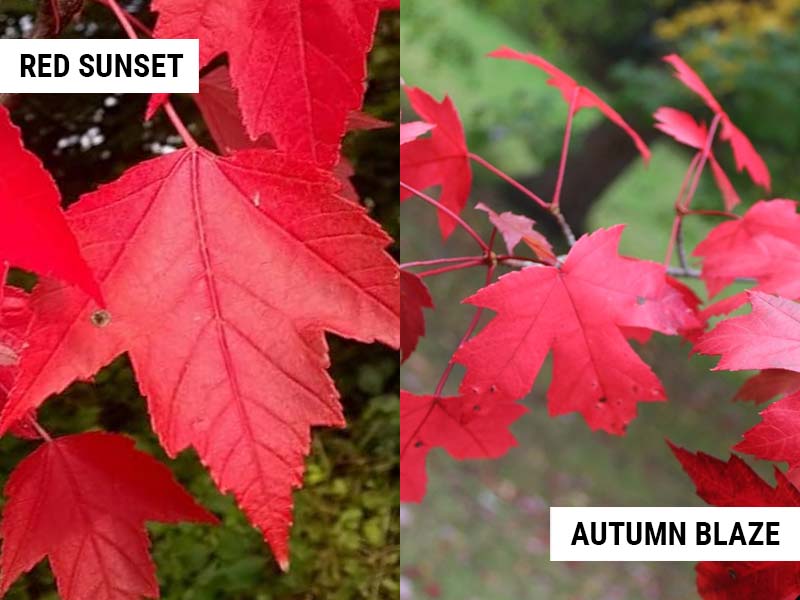 The leaf shape of both maples is very similar. It usually has 3 or 5 lobes, the depth of cuts may vary slightly.

The real difference here is the size. Red Sunset has a leaf 6 inches wide and the same length. Whereas Autumn Blaze leaves are half that size, measuring 3 inches across.

From this comes a slightly different appearance of these varieties. Autumn Blaze has a slightly loose crown while Red Sunset has a thicker, more lush crown.

Another consequence of this is that Red Sunset forms a denser canopy, so there will be deep shade underneath. Autumn Blaze has a less dense canopy and some of the sun’s rays will penetrate through it.

As for color, these maples are equal. In early spring the foliage is bright green. Then it gets a little paler and darker. In the fall, both trees turn a fiery red and this lasts until the leaves fall.

Autumn Blaze tolerates low temperatures better than the competition. This variety is recommended for planting in zone 3. Not many U.S. residents live in this climate, but still. Besides, its better frost tolerance makes it suitable for growing in parts of Canada.

Red Sunset should be grown in zone 4; further north, it can be damaged by frost. The advantage of this variety is that it has strong branches that will not break even in heavy snowfall.

As for the south, both maples can be grown in zone 8. Autumn Blaze has no problem with that. The sun and heat of that climate do not interfere with the vigorous growth of this variety.

You can often find recommendations that Red Sunset can be grown in the 9 USDA hardiness zone. But unfortunately, this is very hard. You must shade the plant in the first years and water it regularly. In extreme heat, this maple can get leaf scorch.

Even in zone 8, Red Sunset sometimes has problems. So Autumn Blaze is better suited for both north and south. While Red Sunset is most comfortable in zones 5-7.

Red Sunset averages 1-1.5 feet of annual growth. If the climate is moderate and the tree has enough moisture, the growth rate can accelerate to 2 feet per year.

At the same time, Autumn Blaze Maple usually grows 2 feet per year. If conditions are ideal, the tree can even accelerate in growth. Sometimes it even has to be controlled by pruning.

The final size of both maples is about the same 47 feet tall and 35 wide. The shape is broadly pyramidal. They both form quite a wide canopy for shade, but the shade under the Red Sunset is a little deeper as I mentioned earlier.

If speed is important to you and you want a beautiful maple with red leaves quickly, Autumn Blaze is the one to go for.

Autumn Blaze has smaller leaves, so the water evaporation area is smaller. As a result, this variety needs less water and is more tolerant of drought. In fact, it is not a problem in zone 8 in hot weather.

Red Sunset is a different story. This maple has better inherited the habits of the red maple, sometimes called the swamp tree. Also, due to the larger leaf area, moisture evaporation is much faster. So you need to plant Red Sunset in a wetter location. It is especially difficult to grow it in zone 8, as I have already mentioned.

Whichever variety you choose, you need to water them in drought the first few years. You need to provide enough moisture until the maple takes root. If it hasn’t rained in over a week, water the maple with 2-3 gallons of water, depending on the size of the plant.

Okay, let’s talk a little bit about what’s similar about these maples. Next, I describe all the basic characteristics and commonalities, but not necessarily that they will be identical for both trees, small differences may still occur.

The first thing these two have in common and at the same time not very pleasant is a lot of waste afterward.

In early spring, when the maples have finished blooming, there are many fallen flowers on the surface. Even though they are small in size, they can still cause some trouble.

Then comes the seed ripening phase, after which the seeds like little helicopters fly around your yard. And that would be OK, but the next spring they start to grow, sometimes even in the most unexpected places. This way the maples occupy more and more territories.

And finally, in late autumn, you get a mountain of leaves that need to be disposed of somewhere. Although both varieties are medium-sized maples, so there are not as many leaves from them as from large trees.

Most maples tolerate different types of soil well. Whether it’s light or heavy soil they grow well there. Red Sunset can even tolerate a brief stagnation of moisture.

The only thing they are not good at is alkaline soil. If your soil pH is above 7.0, each of our maples can have problems, such as chlorosis. In such a case you can acidify the soil by adding peat.

Sunlight is the next common need of both varieties. Autumn Blaze needs a least 6 hours of direct sun per day. For more northern latitudes, the amount of sun should increase. The rest of the time this maple can be left in the shade. Which means it tolerates full sun as well as partial shade.

The same can be said for Red Sunset, with the difference that it needs more light. This is due to the large size of the foliage, which requires more solar energy to create. For this maple to thrive it needs 8-10 hours of sunlight a day.

Maple trees have the advantage of low nutrient requirements. They can grow on poor soil without fertilizer. But if you want to speed up their growth then you need to feed them in the first 2-3 years. Feeding is especially justified in the case of Red Sunset because it grows a little slower.

The first type of fertilizer you want to use is mulch compost. This will give the plant organic nutrients and prevent the soil near the roots from drying out too quickly.

The second type is a slow-release fertilizer. It should be used once in early spring. You don’t need to do anything else, the pellets will do the job.