This is the second time I’ve compared October Glory to another red maple. Obviously, this variety is extremely popular and there are many reasons for that. But today we will compare it to Red Sunset Maple, which is just as good or maybe even better.

In autumn Red Sunset turns red earlier than October Glory and therefore has a longer period of interest in autumn.

Both of these varieties belong to the species Acer rubrum and inherit most of the characteristics of this species. October Glory appeared in a family nursery in New Jersey in the early 1960s. In that time it gained a crowd of fans and became one of the most sought-after red maples.

Red Sunset appeared 20 years earlier in Oregon, but it also started gaining popularity in the ’60s. It’s hard to judge which one is more popular now, but whatever the case, today you’ll learn all about these wonderful trees. 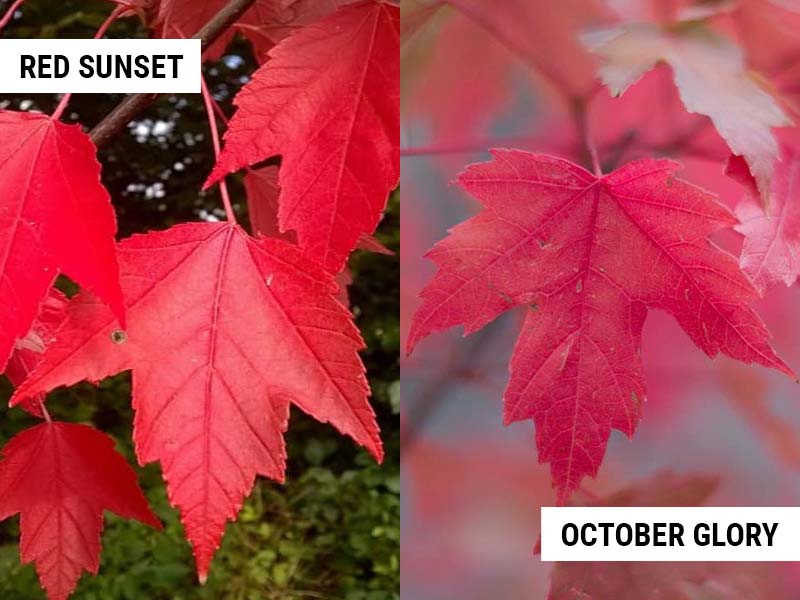 Size and shape are different

The first distinguishing characteristic of these two maples is their size. Red Sunset is slightly larger than its competitor. After 10 years, it will have grown to 50 feet tall and 40 feet wide. While October Glory will be 30 feet tall and 25 feet wide by then.

The growth rate is also different. October Glory typically grows 12 inches a year, but under ideal conditions, annual growth can be 20 inches. At the same time, Red Sunset usually grows 1.5 feet a year, and with enough water, the growth can increase to 2 feet a year.

It follows from the size that Red Sunset would be suitable for a large garden or alley. October Glory in turn is suitable for small to medium-sized gardens.

Another difference is the shape of the crown. October Glory grows almost equally in both width and height. Whereas Red Sunset is more elongated and pyramidal in shape. This means that if you need a wide canopy, October Glory is a better choice, as it will be wider than its competitor for the same height.

One of the main advantages of both maples is their foliage. They have the same leaf size – 6 inches across. The shape is also very similar, the leaf has 3-5 lobes but the cuts of the October Glory leaf are slightly deeper.

The main difference here is that October Glory turns red later than Red Sunset. So if your goal is to get bright red foliage earlier and therefore for a longer period, Red Sunset is preferable.

Both maples have bright green young leaves in spring. By summer, the color becomes slightly paler. In fall in mid-September, Red Sunset changes to a bright red, and after a while, the foliage turns red-orange.

October Glory does not change to red until late September or early October. At first, the color is very similar to its competitor but then turns a reddish-purple.

Another advantage of Red Sunset is that due to its larger size, there will be more red foliage than October Glory. So you get a more voluminous picture of mesmerizing red foliage. 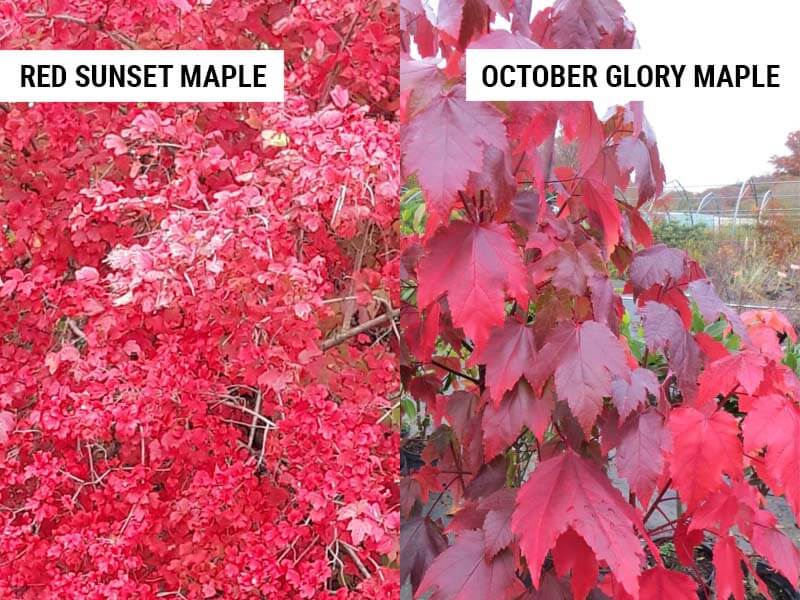 October Glory can be grown in 4-9 USDA hardiness zones. It will tolerate the heat of the southern U.S. very well and will not get burnt on the leaves. But in such a case, it may grow a little slower due to a possible lack of moisture.

Red Sunset on the other hand is recommended for planting in zones 4-8. That is, it will not grow well in zone 9. Some nurseries recommend planting it in zone 9, but that is a real challenge. To succeed in this, you have to plant the maple in partial shade and provide it with enough water.

But an advantage of Red Sunset is that it tolerates the cold better and does not crack in the snow because it has stronger branches. It can even be grown in zone 3 if planted in a wind-protected location. At the same time, October Glory can be difficult even in zone 4.

Next, we’ll talk about what Red Sunset Maple and October Glory Maple have in common. Mostly I will be talking about how to care for them, but there can also be small differences that are not worth a separate chapter. So be sure to read to the end of the article so you don’t miss anything important.

Both of these maples have the unpleasant feature that they leave a lot of trash behind. And I’m not just talking about the fallen leaves at the end of fall, which, by the way, are also plentiful. I’m talking about the flowering period after which the entire garden is covered with fallen flowers. They are small, but there are a lot of them.

Also after ripening, the seeds are dispersed over a considerable distance, which brings a lot of trouble. The seeds are not very noticeable, but they tend to germinate in quite unexpected places. You will have to remove maple seedlings from time to time in your yard.

In this respect, October Glory is preferable to its competitor because it is smaller and therefore less of a mess.

Soil requirements for both varieties are minimal. They grow equally well in both poor and rich soils. Heavy clay soil is not a problem for them either.

What they do not like is alkaline soil. Slightly acidic or neutral soil will be best for them. If the pH is higher than 7.0, chlorosis can develop and the leaves will turn yellow.

I also recommend putting some good compost in the planting hole when planting and mixing it with the native soil. This will make the soil lighter and more nutritious, which is especially important in the early years of any plant. 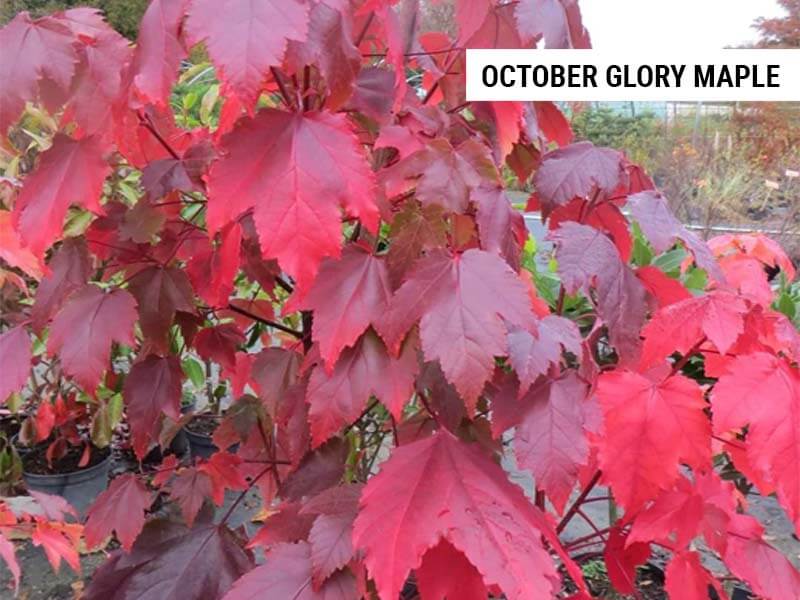 The next thing you should pay attention to is watering. It is ideal if you plant maple trees in a place where the soil is constantly moist but there is no stagnant water. This is especially important in zones 8 and 9 because in these climates, the sun shines very strongly and the trees need more water.

Watering should only be done when there is a drought. The amount of water should be about 2 gallons. Mature maples do not need to be watered because they can even tolerate a little drought. But for young trees, watering is absolutely necessary for the first few years after planting.

October Glory needs a little less water because its size is smaller. Accordingly, this maple will be less trouble in terms of watering.

You need to provide 6-8 hours of sunlight to these plants. Otherwise, they will not develop properly and their crown will be loose and the branches will be brittle. Besides, with a lack of UV light, it will be easier for fungal diseases to affect the trees.

Both Red Sunset and October Glory tolerate full sun and partial shade. I recommend planting them in full sun if you live in the north, and partial shade if you are in the south (zones 8-9). This is especially important for Red Sunset because it is less tolerant of hot climates.

Mature maples don’t need nutrients at all. In fact, once the trees get established they will grow so fast that you will have to slow them down.

But still, if you want to get great results faster, you need to feed them in the second and third year, but don’t fertilize in the first year. This is especially true for October Glory because it is slower growing than the competition.

The first thing I recommend is to mulch the root zone with quality compost. This will not only provide organic nutrients but will also prevent the soil from drying out too quickly.

Then apply a slow-release fertilizer in early spring. It is better to prefer a product with high nitrogen content. One fertilization per year is usually sufficient.

They have similar pest and diseases

Sometimes pests can damage a maple, regardless of the variety. Many different insects feed on leaves and maple bark, but the most dangerous are leafhoppers. If the trees are young, these pests can cause considerable damage. Garden oil does not work well against them, so you have to use insecticides to get rid of this pest.

The second is a disease. Usually, fungal diseases are not dangerous to maples. They can manifest themselves as spots on the leaves. But if you want your tree to be healthy, spray it with fungicide.