Today we have a very interesting tree to consider – Chilean Mesquite. Every year the interest in this plant is gradually increasing and it is no coincidence because it has useful properties, which will be discussed today. But as always there is another side of the coin, which I will also mention.

The scientific name of this tree is Prosopis chilensis. Its main distribution area is in South America, but it grows in other parts of the world as well.

This medium-sized tree has no direct use in agriculture or the timber industry. Neither the fruit nor the wood is valuable. But due to some properties, people have still learned to use even such a seemingly useless plant. 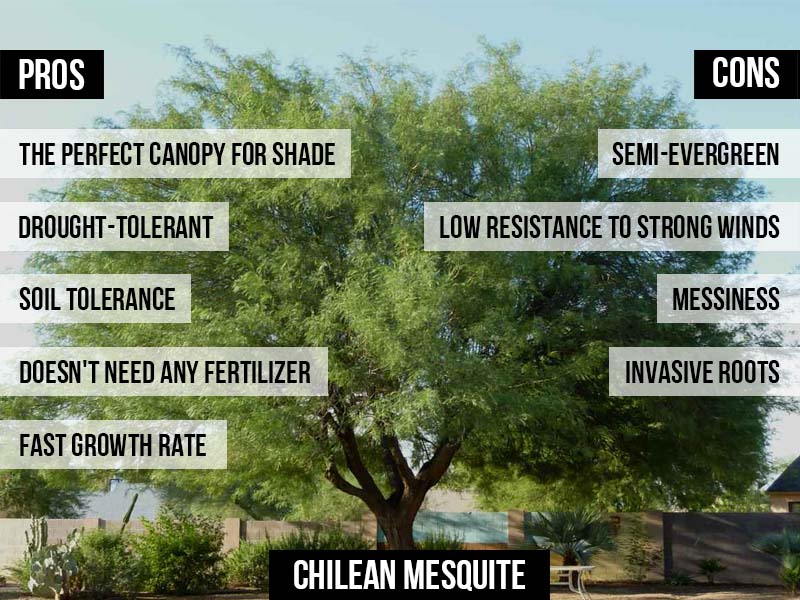 Pro: The perfect canopy for shade

The main reason people plant Chilean mesquite is its canopy, which creates shade on hot days. This tree can reflect a significant amount of light and tolerate full sun and intense heat.

It reaches a height of 30-40 feet (9-12 m). Its width is about equal to its height. This is enough to create a large living canopy in the shade of which you can grow shade-loving plants or arrange a place to rest. Chilean mesquite is also often planted near a porch or patio for the same purpose – to get shade.

The advantage of this tree is not very dense foliage, which means that you do not get full shade. The leaves are small and grow in pairs on long stems. Part of the sun goes through the crown of the tree and you get a perfect balance of light and shade.

Another advantage is the interesting pattern of the branches. They grow in different directions, not like most trees. This creates additional decorative value.

Chilean mesquite can grow on almost all types of soils. Both loam and sandy soil are equally suitable for it. Rocky desert soil also works well.

With clay soils, this tree is also not bad. But it will be better if before planting you make a small improvement to the clay soil by adding some compost to it. This will make the soil lighter and more drained, so you will help the tree to root faster.

The acidity of the soil also has little effect on Chilean mesquite. Both acidic and alkaline soils will work well for this tree. But do not plant in very acidic (pH > 5.5) or very alkaline (pH > 8.0) soils.

Drought tolerance is another hallmark of Chilean mesquite. This is especially important in hot and dry climates because it frees homeowners from routine watering.

But that doesn’t mean this tree doesn’t need water at all. After planting, you will still need to water once a week when it doesn’t rain. But once the plant is established (1 year), watering is not needed at all.

Such watering requirements make Chilean mesquite special because many trees (like some maples) require watering even when mature. Furthermore, if the Chilean mesquite is watered regularly for a long time, the root system will not develop properly, which can lead to negative consequences. Therefore, do not water this tree more than one year after planting.

Chilean mesquite belongs to the plants that can fertilize themselves. Its roots can retain nitrogen from the air and thus the plant provides itself with nutrition.

Besides, the fallen leaves also provide additional nutrition for the plant. So you never have to worry about feeding the Chilean mesquite.

But I do recommend a little nutrient at the start. This way it will be easier for the plant to settle in a new place.

First of all, you should put some phosphate fertilizer in the planting hole, this will stimulate the growth of the roots. Then you have to apply slow-release fertilizer once. This is enough for the tree for a year. After that, you will never have to feed Chilean mesquite again.

The fast growth rate is definitely an advantage of Chilean mesquite. It grows 1-2 feet per year, both in height and width. As a result, you will quickly get a big beautiful tree with a wide canopy of shade.

Also, Chilean mesquite has a long life span of over 100 years. So you won’t have to replace it throughout your lifetime. Which is not the case with Cherry blossom, for example, as they do not live more than 30-40 years.

If you want your Chilean mesquite to grow even faster, you must protect it from pests, apart from feeding and watering in the first year.

In fact, pests can really stunt the plant’s growth. The easiest way to protect is to spray the tree with neem oil or other horticultural oil.

Let’s now talk about the disadvantages.

The first thing worth noting is that Chilean mesquite is a semi-evergreen tree. This means that on the part of the area where you can grow this tree, it will drop its leaves for the winter. As a result, you will not get shade year-round, and secondly, you will have to clean up the fallen leaves.

But it does not always shed its leaves. This will most often happen if you have had a harsh winter.

The second big disadvantage associated with the first is its poor frost resistance. This plant is recommended for 8 to 11 USDA zones. This means that the advantages of Chilean mesquite will not be available to a large number of homeowners in the USA.

Another big concern is the invasive roots of Chilean mesquite.

This tree has a superficial and powerful root system. In some cases this can be an advantage, for example, the shallow roots are good at protecting the soil from erosion.

But much more often, the roots damage sidewalks or driveways. The same is true for foundations and pools. Never plant this tree near buildings or other structures that have concrete foundations.

The distance from the Chilean mesquite to the house should be at least 20 feet.

Unfortunately, the root feature of this plant very much narrows its application. Part of the problem can be solved by removing the top of the roots. Still, only non-capital structures (benches, tables, etc.) should be placed under this tree.

Chilean mesquite is a very messy plant. As I mentioned above this tree can shed leaves in some climates, which will be a significant problem for its owners.

But this tree is messier after flowering. First, the surface of the garden becomes covered with many fallen flowers. And if you think that is not enough, after a while the seed pods will start to fall off. As a result, you get lots of waste that you have to clean up every year.

Another downside is that the Chilean mesquite sometimes has sharp thorns. They can be up to 2 inches long. In this case, walking under a tree can be dangerous because you can easily injure yourself. But it is worth noting that the thorns do not always appear.

These annoying characteristics make the plant quite difficult and troublesome to care for.

Strong winds can very badly damage even an adult Chilean mesquite. The fact is that this tree creates a lot of thin branches that are not very resistant to extreme weather conditions and can break.

Besides, the structure of the wood is special and unfortunately not as strong as oak wood for example. As a result of a storm, the tree can fall apart and damage the objects that are under it (cars, garden tools, etc.).

To prevent this you can regularly prune the plant. And branches will be shorter but stronger. This will not completely solve the problem, but the result will be noticeable.