Today we are going to look at two related philodendrons, Imperial Red and Rojo Congo. In fact, they are father and son (or mother and son to be precise). And as is often the case, the difference between the relatives is insignificant.

But not this time! Looking ahead I can say for sure that we will be talking about quite different plants.

Rojo Congo was obtained in the mid-1990s by crossing Imperial Red and another philodendron. Rojo Congo has several other names, but the second most popular name is Red Congo.

Imperial Red is also quite new and was also obtained by hybridization. 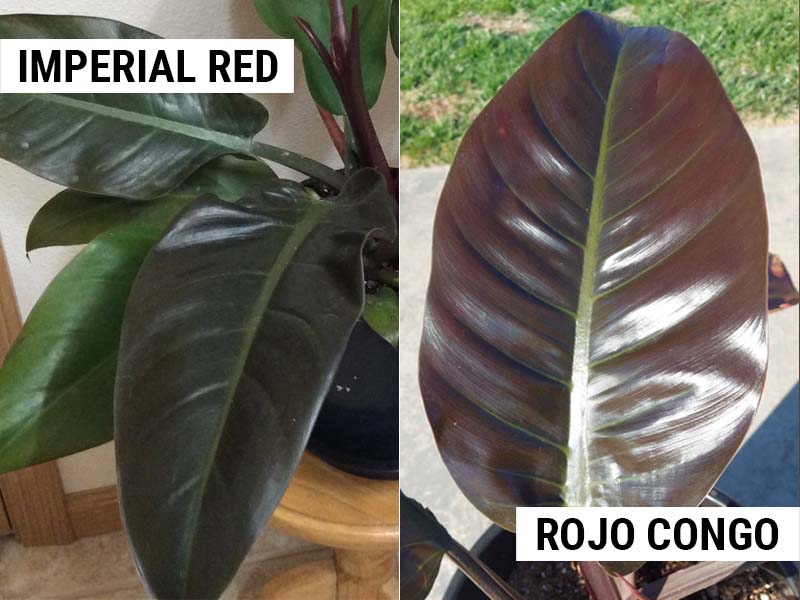 The first thing that noticeably distinguishes these two plants is size. The Rojo Congo is larger than its competitor, it can reach up to 4 feet tall and 4 feet wide. Whereas Imperial Red usually does not grow more than 3 feet in both width and height.

The growth habit is also slightly different. Imperial Red is a small bush and it is denser. Whereas Rojo Congo grows more in height, but some of the side stems are far enough away from the center.

Another difference is the growth rate. Rojo Congo grows faster and is more vigorous than Imperial Red. This is especially noticeable after a transplant or stress, it recovers much faster.

So if you want to get a big plant fast, Rojo Congo should be your first choice. In all other cases, Imperial Red is more suitable. But remember, the bigger the plant, the more space you will need for it in the house. It will also need a bigger pot, so moving it around will be a bit of a hassle.

Rojo Congo has darker leaves, and it also has a more prominent dark red hue. The contrast between the center of the leaf and the edge is more pronounced than its competitor. The middle of the leaf is greenish-brown, while the edge is almost dark red.

Imperial Red does not boast the same beautiful leaves as its competitor. The leaf blade has no red hue. All you can expect is a brownish-green color, and sometimes the foliage can be just dark green.

The color of the young leaves is also different. Rojo Congo has bright red young leaves while Imperial Red is reddish-brown. This gives the first one an extra value.

Overall, Rojo Congo has more attractive leaves. Because they are darker, the gloss is more pronounced. The light is much better reflected from the surface of the leaves, which is stunning.

Unfortunately Imperial Red can not provide the same beauty with its leaves.

The leaves size and shape are different

Leaves differ not only in color but in shape and size.

The leaves of Rojo Congo are slightly larger than those of its competitor. Their size reaches 10 inches long while Imperial Red leaves do not exceed 7 inches in length.

The proportions of the leaves are also different. Imperial Red has a smaller leaf width as a result it looks more elongated and pointed. At the same time, Rojo Congo has not only longer leaves but also proportionally wider, so as a result, the leaf has a more oval (rounded) shape.

Another small difference is the thickness of the leaf. Rojo Congo leaves are thicker and denser. They look more solid and massive. If you add to this an interesting color, Rojo Congo becomes an absolute winner in appearance.

The third significant difference is the petioles of the plants.

Rojo Congo has thicker and longer leaf petioles than its current rival. Besides, their color is dark red-purple and it is very intense. The leaves along with the thick petioles look mesmerizing.

At the same time, the petioles of Imperial Red are thinner and not as long. As a result, as I have already mentioned, the plant is more compact. Also, the color of the petioles is brownish-green, which means that they are no different from other philodendron species.

Like the leaves, the petioles of Rojo Congo look much more decorative than Imperial Red. In fact, this is another feature that is highly regarded among admirers of these plants. 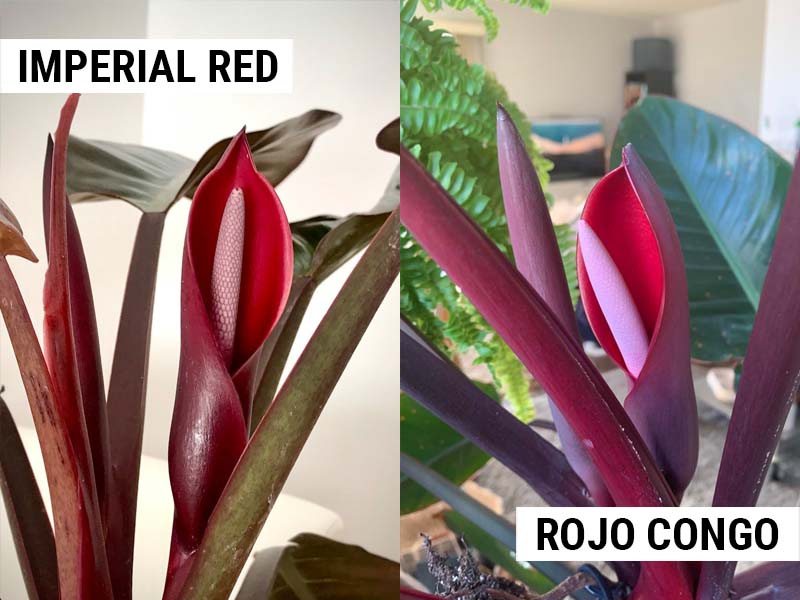 The flowering of these two philodendrons is also slightly different. They both only start blooming when they reach maturity. The flowering period is in the second half of spring. Usually, the plants form one large flower.

Imperial Red and Rojo Congo are both red, but as you can see from the picture above, the latter has a brighter petal color with a purple hue.

The petals of Imperial Red are dark red and not as interesting as those of Rojo Congo. So here is another win for the latter.

Since Rojo Congo is larger and more energetic, it also has a more developed root system. In fact, this can be both an advantage and a disadvantage.

The advantage of large roots is that they provide the plant with more water and nutrients. But at the same time, they need more space. While Imperial Red can be grown in small pots, Rojo Congo needs a bigger container. I recommend using pots at least 10-15 inches high and wide.

Also, use only quality and sturdy containers. Otherwise, the roots can damage them. There is a technique for pruning the roots so that the plant has a more compact root system, but unless you have an experience I do not recommend this.

In addition to significant differences, these two share the same requirements for care, growing conditions, and more. So let’s talk a little bit about that.

Imperial Red and Rojo Congo need plenty of sunlight. It is best if you place them near an east or west window. But do not plant them directly in front of the window. Direct sunlight is not good for them.

Philodendrons should get at least six hours of bright indirect light a day. You can place the pots on the side of the window or in front of the window but at least 3 to 3.5 feet away from it to get such a result.

Do not grow them near north-facing windows or in the back of the room. In this case, the leaves will not grow and the plant will have an unhealthy appearance.

Because these plants have large leaves they need plenty of water, but this does not mean that you need to overwater them.

You mustn’t dry out more than half of the soil. Check to see if the soil is wet, and if it is dry, water it to make it wet but not soggy. You can also use a soil tester, it will tell you more accurately how much water your plant needs.

In general, from spring to fall Philodendron needs watering once a week on average. In winter it needs less water, one watering every two weeks is enough. Rojo Congo Congo needs a bit more water because the plant is a bit bigger.

You should not water philodendrons very often, otherwise, root rot can occur. Always plant them only in pots with drainage holes.

Both varieties tolerate indoor conditions well and do not need anything special. But some rules need to be followed.

First of all, you should not place them near heaters, and the same applies to cooling devices. Otherwise, the plant can get damaged.

Secondly, during the growing season, it needs more heat than during the resting period. So you can move the plant away from the window.0

And thirdly, dry spots can appear on the leaves occasionally. This is the result of inadequate humidity. If this happens to your plant, you need to mist the leaves from time to time.

Since philodendrons are quite large plants and the amount of soil in the pots is limited you need to fertilize them.

Compost works well. You need to put a small amount of compost in the spring. Just sprinkle not a very thick layer on the surface of the soil in the pot. Once a year is enough. Only use a good quality compost.

Then during the growing season, you need to water the plants with liquid fertilizer for this type of plant. You can easily find a lot of good fertilizer on the market.

Also, you should not overfeed philodendrons. Otherwise, the plants will become large and their stems will become brittle. A few fertilizers a year is enough for both Imperial Red and Rojo Congo to grow well.

Both of these varieties need a good soil mix. First of all, the substrate should retain moisture well, but the water should not stagnate. This means that, after irrigation, the excess water must drain away through the drainage holes, but at the same time the substrate must remain wet for some time.

To achieve such a goal you have to mix half the potting soil with half the good quality compost. The result is a rich soil mixture for the good growth of philodendrons.

About once every two years you need to change the soil. The fact is that over time the substrate loses its useful properties and must be renewed.

In general, both Imperial Red and Rojo Congo do not need pruning. The only case is the removal of yellowed and dead leaves and stems. But make sure that your pruning tools are sterile, as otherwise, you can infect the plant with the disease.

Often owners of these beautiful plants cut them for cuttings. Indeed, rhododendrons can be propagated by cuttings and if you are interested, you can cut off 1 or 2 stems and get new plants.

Pests rarely damage philodendrons, but that does not mean they are completely safe. Occasionally, some insects may attack these plants.

Aphids are especially dangerous. Although they do not feed on the plant tissues but suck the plant juices, their reproduction rate is very high. If you do not notice them in time, the plant can suffer a lot. To get rid of this pest, you need to spray the plant with neem oil.

The second pest is the spider mite. They are very small creatures and it is not easy to notice them. As soon as you find these pests, spray the plant immediately with water, the moisture will repel them. But more effective remedies are acaricides.

Unfortunately, authoritative organizations have labeled Imperial Red and Rojo Congo as toxic plants. This is especially true for pets. So if you have one then be on the lookout for it.

Although these plants can do no great harm to pets or humans.