There are many different magnolias, and every year the number of new varieties increases. It seems that hybridizers want to achieve some invisible goal. But whatever the case, some varieties do not lose their appeal decades after they were born.

Magnolia Little Gem was obtained by seedling selection in the 1950s at a North Carolina nursery. The origin story of Magnolia Teddy Bear is lost to time, one thing is certain that it has another name, Magnolia grandiflora Southern Charm. 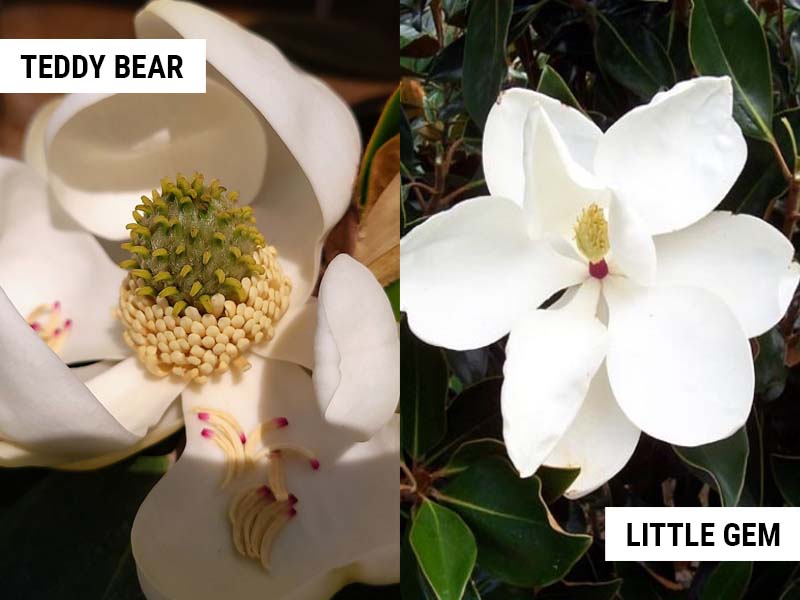 The flowering of these two amazing magnolias, although similar, still has several significant differences.

The first is the shade of the flowers. Their flower size is about the same – 8 inches across. The color of the petals is white. But Teddy Bear has a creamy white color while Little Gem is grayish-white. The difference is not significant but if you look at the flowers up close you will see the difference.

The second is the flowering period. The first time both varieties bloom is in the spring. Then comes the heat of summer and they drop the flowers. The first one to re-bloom is Little Gem, which starts in late summer and can last the whole fall and even early December. Teddy Bear blooms once more in early fall and that’s it.

Besides, both the first and second blooms of Little Gem last longer than Teddy Bear. This means you get a longer flowering period if you choose Little Gem.

Lastly, Little Gem blooms with more flowers than its competitor. The difference isn’t huge but noticeable.

At this stage of the contest, Little Gem gets an unconditional victory.

The next thing that separates these two varieties is their growth habit. They are medium-sized trees that are pyramidal in shape but still have differences.

Little Gem is 15-20 feet tall, under ideal conditions (in warm climates) it can reach as high as 25 feet. It usually grows no more than 10 feet wide. Which means it has a more elongated (narrower) shape.

Under similar conditions, the Teddy Bear will not reach more than 20 feet in height. But it can easily reach 10 or even 12 feet wide. It follows that it has a more broadly pyramidal growth habit.

From all of the above in this chapter, it follows that if you want a tree with a wider canopy for shade then choose Teddy Bear. And if you want to get a beautiful flowering tree quickly, Little Gem is a good choice.

The last difference is the leaves. Each variety has a few peculiarities in the appearance of the leaves and these together make the foliage not the same.

The next is a brown fuzz on the backside of the leaf. Little Gem has a very tiny light brown fluff, it is almost impossible to see it, only by touching it can you feel it. Teddy Bear has a more pronounced fuzz that looks almost like fur. Besides, the brown color is much more intense.

As a result, Teddy Bear has a sharp contrast between the upper green part of the leaf and the lower deep brown. Little Gem can’t offer the same effect. Also, Teddy Bear’s leaves are a little darker, which gives them more solidity. 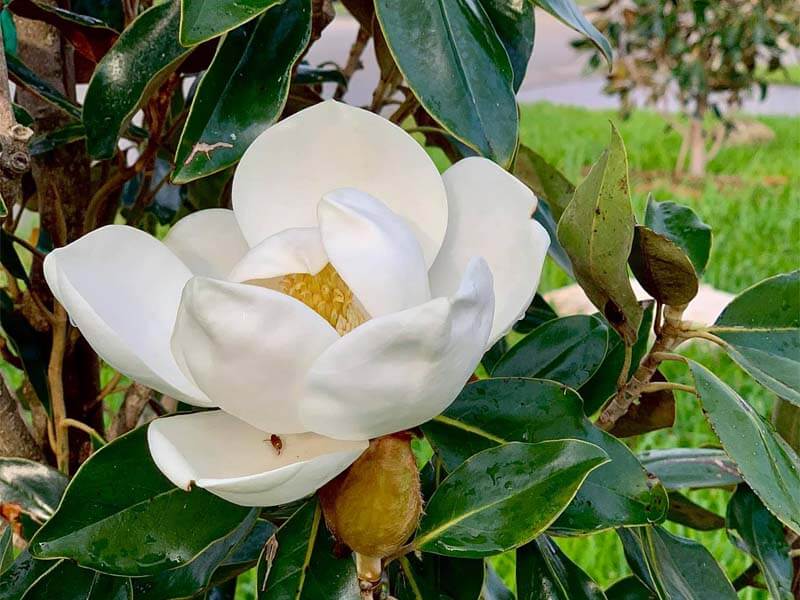 Next, we will talk about what these two magnolias have in common. Although even here there are small differences that do not deserve a separate chapter, so be sure to read all of the following so as not to miss any information that will help choose a plant.

The first thing they have in common is the scent. Many homeowners choose magnolias because their smell is very pleasant and attracts bees and other insects, so the garden is filled with life.

Both of these varieties have a strong scent that can be felt from afar. It can be described as sweet.

Little Gem has a slight advantage here with a longer flowering time and you will enjoy its scent for a longer time. 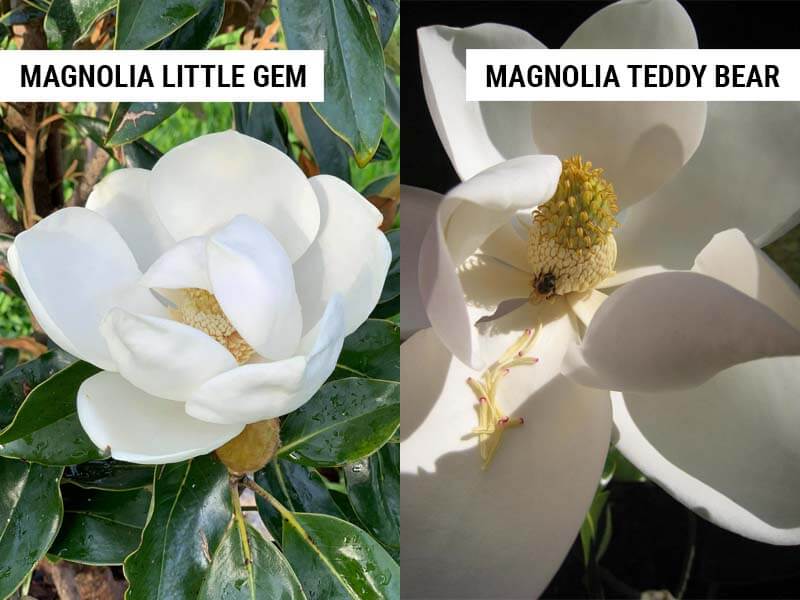 Both Teddy Bear and Little Gem are considered not demanding plants, but there are still some conditions that you need to follow.

The first is the climate. It has been proven that they can grow in the 7 through 9 USDA hardiness zones. Some nurseries recommend growing them in zone 10a, but there’s no clear indication that this is possible. In fact, magnolias can be uncomfortable in hotter climates so you run a risk if you plant them south of zone 9 or north of zone 7.

The next thing is sun exposure. Exactly what you shouldn’t do is put these trees in a lot of shade. You have to give them at least 6 hours of direct sun per day. In zone 7, the amount of sun can be more (8 hours). For part of the day they can stay in the shade. Also Teddy Bear requires slightly less light than Little Gem.

But both of these plants will grow fine in full sun as well. In this case, they will even have richer leaf color and bloom more abundantly.

Humidity is not the most important factor in the successful cultivation of magnolias. Both of these varieties will grow well in both humid and dry climates. The only thing not to do is to place them in a very humid location with poor air circulation, as this can result in leaf spotting.

Once magnolias are established in your garden, they can tolerate a little drought. But that doesn’t mean they don’t need watering at all. Both of today’s guests need enough water to thrive and have beautiful flowers.

In spring and fall, the soil moisture is usually high so watering is not necessary. But if the weather is dry and the ground is more than an inch dry, water the plants with enough water to keep the soil around them moist.

In the winter, don’t water magnolias because they are dormant and excess moisture can cause roots to rot.

In addition to timely watering, you should also mulch the surface around the magnolias. This will reduce the speed of drying the substrate. Good quality compost works best as mulch. A layer of mulch should be at least 2 inches. Do not bury the tree trunk in the mulch, as this can cause it to rot.

Whether you choose Little Gem or Teddy Bear, they both tolerate most types of soil well. But I would still recommend the best conditions possible.

The ideal soil for magnolias is a loose and nutritious substrate that does not dry out too quickly but does not have water stagnation.

To get such a soil mixture you have to mix 50% of the native soil in the planting hole with some quality compost, which I recommend use for mulching. That’s it, with such soil you will get generously flowering magnolias in your garden.

But to replenish their strength after blooming profusely, magnolias need a dose of fertilizer. It is best if you use fertilizer in the form of pellets that release slowly throughout the season. The fertilizer should have equal amounts of nitrogen, potassium, and phosphorus. 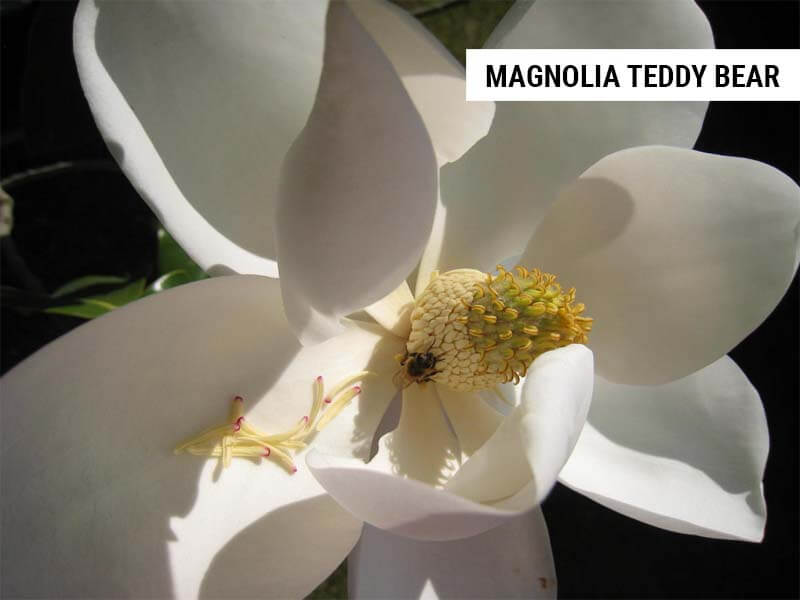 Each of these magnolias is considered a hardy plant and health problems rarely arise. However, it does sometimes happen and you need to know what to do in this case.

The first thing you may encounter is verticillium wilt. It is a disease that affects the branches and leaves of the magnolia. To avoid this, you must always use sterile tools when working on the plant. Magnolia should grow in a sunny location with good air movement, I’ve already written about this in more detail above.

It’s also possible to get infected by various fungus spores you might notice as spots on the leaves. All this can be treated by spraying fungicides.

The second is pests. The most common pests are scale. It is not easy enough to get out, only regular spraying with horticultural oil will help to solve the problem. It is also possible to be infested by other insects. In extreme cases, you can use more effective insecticides.