The tree on which flowers bloom is not uncommon but a very fabulous spectacle. However, if the flowers are a tulip’s size, it is a completely different matter; there are not so many such plants.

Magnolia Genie is a fairly new variety selected in New Zealand. The author of this variety is Vance Hooper. This is a hybrid variety; its parents are Magnolia Sweet Valentine and Magnolia liliiflora Nigra seedling.

The peculiarity of Genie is that it can bloom for the second or third year after reproduction. But this is true if the grafting is done correctly, and the rootstock is vigorous and healthy.

Magnolia Black Tulip is the grandfather of Genie. This variety is also a hybrid; its parents are Magnolia Iolanthe and Vulcan. Besides, be sure to read this article to be aware of the proper cultivation of these wonderful varieties. 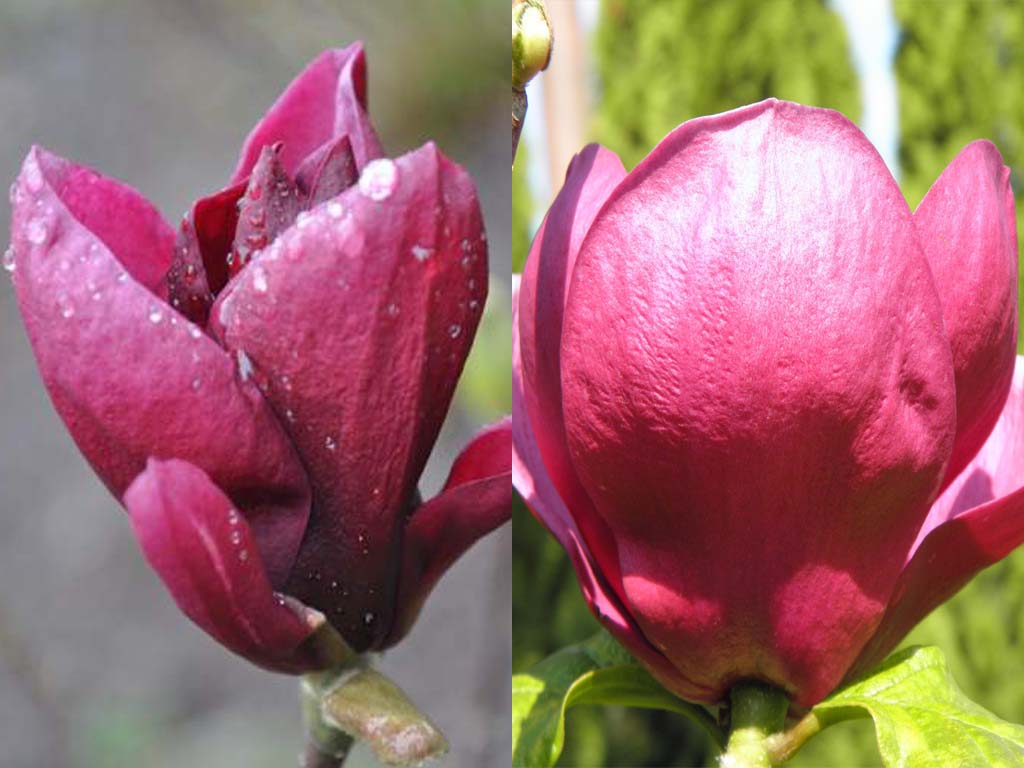 The main difference between Genie and Black Tulip is that it is capable of reblooming.

It all starts in the spring; Genie first blooms in April before the leaves appear on it. Flowering lasts a few weeks.

By selecting Magnolia Genie, breeders succeeded for the first time in getting a magnolia capable of reblooming. Before that, there were only magnolias that bloomed in spring, and the rest of the year was without flowers.

Genie reblooms sporadically, starting in late July and throughout August. Of course, the number of flowers is not the same as in spring, but the tree still looks excellent.

Unfortunately, Black Tulip does not bloom a second time. The first flowering occurs in spring and lasts as long as Genie.

Genie’s ability to bloom twice a year makes her better than the Black Tulip. By choosing this variety, you will get more pleasure from contemplating beautiful flowers.

These two magnolias can grow from 5 to 8 hardiness zones. However, because Genie begins to bloom two weeks later, the risk of damage from late frosts is reduced.

This is especially true for 5 and 6 climate zones where the last frosts may occur in mid-April.

All this makes Genie, in general, more resistant to climatic conditions. On the other hand, Black Tulip is often damaged by frost.

So if you live in the north, then you better choose Genie because today, there are no methods by which you can effectively protect magnolia flowers from freezing.

The color of Genie is more intense

In general, Genie has a better color than Black Tulip. There are several reasons for this, which we will discuss next.

Starting from the first blooming, Genie has a rich burgundy color. And as I mentioned before, it can bloom for 2-3 years after grafting, so you get beautiful flowers pretty quickly.

On the other hand, young Black Tulip trees do not show intense flower color in the first years after planting.

In addition to the fact that it begins to bloom at a more mature age, this variety in the early years has a pale color, and you have to wait a few years for the flowers to become deep dark.

The center of the Black Tulip flower is lighter than the Genie and often has a pinkish-purple color.

Another strength of Genie is that the color pigment is more resistant to sunlight, so the color is better preserved. As in dappled shade, the color does not lose its intensity.

Black Tulip can burn in strong sunlight. And with strong shading, the flowers will also be pale, and they will be few.

So in terms of color intensity and its stability, Genie wins. At least this can be said for sure about young plants. The difference between 15-to 20-year-old plants may not be obvious.

The shape of Black Tulip flowers has a better look. The fact is that this variety of petals do not open completely, and the flower retains the form of a tulip throughout flowering.

On the other hand, the Genie flowers’ size is 6 inches (15cm), and when they are at peak blooming, they are entirely open. As you know, magnolia petals are quite large, so the open flower looks less attractive because the petals are often disheveled.

On the other hand, Black Tulip flowers are always in the right shape, which is its undeniable advantage.

Also, a half-closed flower is less damaged by wind, so in adverse weather conditions, this variety will look better.

From all this, we can conclude that the shape of Genie’s flowers is inferior to Black Tulip.

Another of the most significant differences between Genie and Black Tulip is their size.

However, if you want to have a large flowering tree in your yard, you should choose Black Tulip.

I must also say that with the help of pruning, you can control the size of the magnolias. Each year, prune the magnolia and the height you need but not more than a third of the plant.

As a result, you will get compact trees, and pruning will stimulate more flowers. But do not prune magnolias in the fall and early spring; otherwise, you can remove the branches with flower buds.