Many gardeners find it difficult to prefer one variety of magnolia because they are all beautiful and elegant. However, there are differences between magnolias that cannot be ignored. The characteristics of some varieties make them more suitable for specific conditions than others.

It all started in the mid-50s. Two prominent breeders Francis DeVos and William Kosar crossed Magnolia Nigra and Magnolia Rosea.

They ended up with a whole series of beautiful varieties and named it ‘Little Girl.’ Among other varieties in this series were two varieties – Ann and Jane. They differ significantly from each other, so let’s take a closer look at them. Be sure to check out the post on how to care for different magnolia trees. 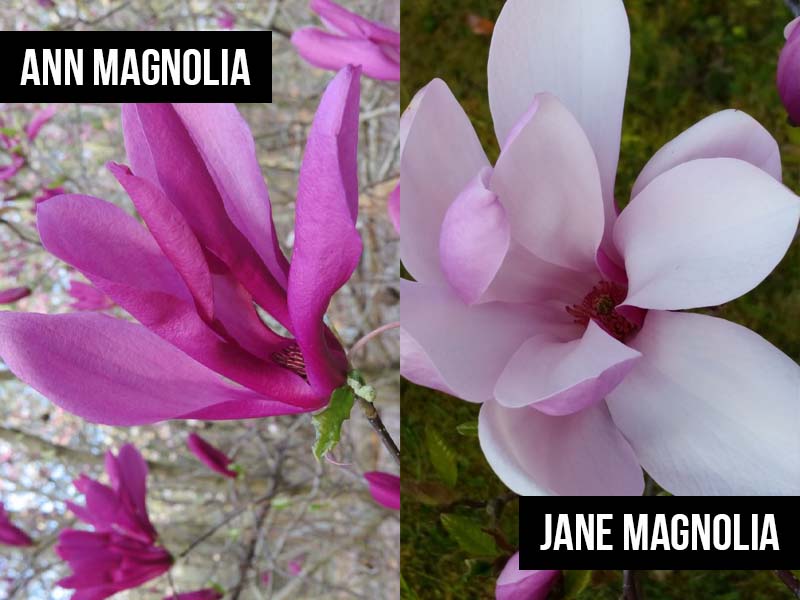 The size of the flowers of these two magnolias is about the same. Ann has flowers 3.5 inches in diameter, and Jane’s flowers are slightly larger and can reach 4 inches.

However, the real difference is in the number of petals and their shape.

Ann has six to eight petals. Their shape is elongated. As a result, the flowers look long and thin. But still, it is also lovely and elegant.

Jane’s flowers have about 10 petals. Also, they are slightly wider than in Ann. All this makes Jane’s flowers richer and lusher in appearance.

If you look at the flower separately, it seems better in Jane, which is definitely an advantage.

However, if you look at the plants from a certain distance, you are unlikely to notice much difference. Also, Ann’s flowers are elegantly beautiful in their own way.

So, in my opinion, here is a draw.

Ann’s color is a deep pink

The next significant difference between these varieties is the color. Yes, they are not the same, even though these magnolias are “sisters.”

Ann has a deep purple-pink color. Sometimes with enough sun (especially at the beginning of flowering), this variety has a reddish-purple color, and it is really very impressive.

The center of the flower (inner side of the petals) is slightly lighter. It is usually light pink. However, there is no strong contrast between the tips of the petals and their outer side.

Everything is different with Jane. First of all, the color of the outside of the petals is much lighter. Mostly it is light pink; sometimes, it can become light purple.

The inner side of the petals is almost white; a slight grayish or pinkish tinge is possible. But in general, the inner side contrasts markedly with the outer side.

It isn’t easy to judge which flowers look more beautiful because thanks to the contrasting petals and the flowers’ shape, Jane looks as beautiful as the bright pink Ann.

However, Ann looks more noticeable in the distance, while Jane discovers her beauty with a close look at her.

Under the same favorable conditions, Jane will reach a larger size than Ann.

In maturity, Jane’s height can exceed 15 feet, with a width of 10 feet. So this is a relatively large tree, and you have to allocate enough space for it.

Ann is smaller, her height rarely exceeding 10 feet. Although sometimes in warm climates, these plants grow up to 12 feet in height.

Another Ann’s feature is that her shape is more shrubby. This means that its width relative to the height is greater than that of Jane.

On average, Ann reaches 8-10 feet wide. Often its width and height are the same or slightly elongated.

From all this, we can conclude that for a small yard, Ann is better suited. But for a large estate, Jane is the better choice.

Although with pruning, you can easily control the size of Jane. And remember that you can not prune more than a third of the plant in one year, and always treat wounds with fungicides.

Reblooming is a relatively new phenomenon among magnolias. Not so long ago, breeders were able to get varieties that bloom a second time in mid-summer.

Although Magnolia Jane is not a new variety, it does tend to bloom in the second half of summer. The number of flowers is not as large as in spring, and its size is slightly smaller.

The second flowering is intermittent. The flowers may appear and disappear, which is repeated from time to time during August.

With sufficient humidity and lack of heat in summer, many magnolias can form flowers for the second time in a year. Among them is Magnolia Ann, but this rarely happens. It is the exception rather than the rule.

On the other hand, reblooming Jane is not so rare. Therefore, if you want to enjoy flowering longer, then you should choose Jane or some new variety that blooms twice a year for sure.

The hardiness of these two magnolias are different

Jane can be grown in USDA hardiness zones from 4 to 8. This is a fairly hardy magnolia. Also, it blooms late, around May.

Late flowering allows this magnolia to avoid freezing from late frosts. This is especially true for climate zone 4, where the last frosts may occur in May.

Ann is hardier; it can be grown from 3 to 8 climatic zones.

However, unlike Jane, it blooms in the second half of April so that late frosts can damage it. In zone 3, frost can occur in mid-May.

From all this, we can conclude that Ann is available to a slightly larger number of gardeners, but late frosts can still damage its flowers.

Therefore, if you live in hardiness zone 4, you better choose Jane, but if further south, you will not feel the difference in frost resistance of these varieties.

Only Magnolia Ann is suitable for zone 3, but sometimes you will have problems with late frosts.

Another difference between these magnolias is the smell.

Jane Magnolia is a very fragrant magnolia; its aroma you can felt at a considerable distance. Many people describe this smell as pleasant and sweet.

The smell of Ann Magnolia is less noticeable. Only at close range will you be able to feel that this magnolia also has a scent.

So if you want a fragrant magnolia, then it is better to choose Jane.