These days, the fern is almost a must-have for every home, garden, or apartment. This is not surprising since the bright green zigzag bush brings a lot of energy to an ordinary landscape.

Some of the best ferns are Boston fern and Kimberly Queen fern.

Boston fern is a cultivar of Nephrolepis exaltata. It was found among other ferns that arrived at the Boston nursery and was named ‘Bostoniensis.’

Kimberly Queen fern is another name for Nephrolepis obliterata. It is a species of fern common in Australia, from where it came to the United States. And now it is not yet as common as the Boston fern. 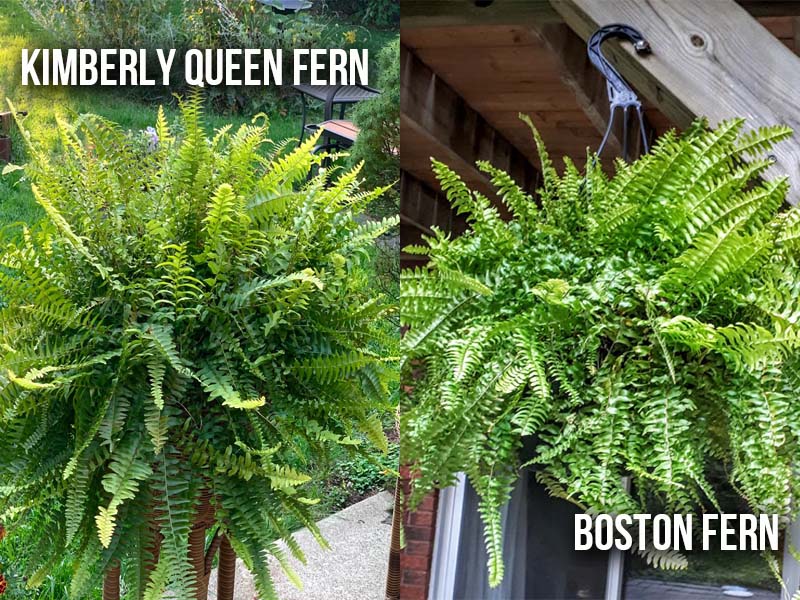 The foliage is not the same

Kimberly Queen fern and Boston fern foliage have a few differences so let’s talk a little about that.

Boston fern has dissected leaflets that are attached to fronds. The leaflets are 1-3 inches long and grow in pairs. They are soft and sag under their weight.

Kimberly Queen fern also has dissected leaflets of the same size. But they are stiffer and do not sag. As a result, the leaves look sharp and, if I may say so, more aggressive.

Boston fern leaves’ softness makes them less durable, and they fall off faster than Kimberly Queen fern. As a result, Boston fern is much messier than its competitor.

Another difference is the color of the leaves. Boston fern has bright green leaves, while Kimberly Queen fern is slightly darker green.

Fronds of both of today’s ferns are usually 1.5-2 feet long. In rare cases, if the plant is growing in the garden and under ideal conditions, fronds can exceed 3 feet in length or more.

The difference is that in addition to the soft leaves, Boston fern fronds are also gentle. And as a result, they bend under the weight of the greenery. This means that this fern can be 3-4 or even almost 6 feet across. And the height is usually not more than 2 feet.

If you hang a pot of Boston fern on your porch, its stems can sag so much that you get the effect of a weeping fern.

On the other hand, Kimberly Queen fern fronds are stiff like leaves, and the plant has a completely different habitus. This fern has a more upright type of growth, and its height and width are about the same (3 feet).

Kimberly Queen fern has a significant advantage over its competitor of being able to grow in full sun.

With enough light, Kimberly Queen fern grows much faster and lusher than its competitor.

Boston fern does not tolerate direct sun at all. It will literally burn out, and you will get dry, yellowed leaves. To prevent this from happening, plant this fern in the shade. As in the previous case, Boston fern should get some indirect sun because it will be looser in total shade.

In terms of sun tolerance, Kimberly Queen fern wins unequivocally. This plant is much more convenient to grow in the yard. But when we’re talking about growing indoors, these ferns are equal.

Kimberly Queen fern is better able to withstand periods of drought. This is because it is native to Australia and has adapted well to the hot, dry climate.

Still, it is not succulent and needs water to thrive. If it hasn’t rained for more than ten days, you need to water the plant. The amount of water should be 1-2 gallons, depending on the size of the plant.

The second indicator of the need for watering will be the soil. It should not dry out more than an inch.

Boston fern is different, and it is not a drought-tolerant plant. If it hasn’t rained in more than a week, be sure to irrigate the fern. The amount of water should be the same as in the previous case.

Also, Boston fern does not tolerate dry, hot air, so you must place it in a moist, shady place. The soil near the roots should not dry out more than half an inch.

If you consider Boston fern in a broad sense, that is, as a whole species of Nephrolepis exaltata, then you have several different varieties to choose from.

First of all, Nephrolepis exaltata ‘Elegantissima’ is worth mentioning here. This cultivar has even lighter leaves and a slightly larger size. It is also more hardy than ‘Bostoniensis.’

Nephrolepis exaltata ‘Roosevelt’ comes next. It has very fluffy leaflets, which makes it very lush.

Among the compact Boston ferns, one of the best is Nephrolepis exaltata ‘Marisa.’ Its small size and exciting foliage pattern make it a worthy alternative to ‘Bostoniensis.’

In addition to the above cultivars, there are several other Boston ferns to choose from, so you can find one to suit your taste.