The sun is the source of life on earth. As for plants, they have all adapted differently to sunlight. While some can grow by taking in all the sunlight, others are not even close to being able to do so.

Hostas cannot grow in full sun. Two to three hours of direct sun in the morning is all most hostas can tolerate. Some are able to grow in a place with a little more sun hours, but that’s about it.

No hosta can tolerate 12 hours of sunshine. The afternoon sun is especially dangerous because the hot air that is heated during the day is added to the light. All of this can leave severe damage on the leaves.

Below we will look at this issue from different angles and in more detail. You will also learn about the possibility of growing hostas in a place with no shade at all. 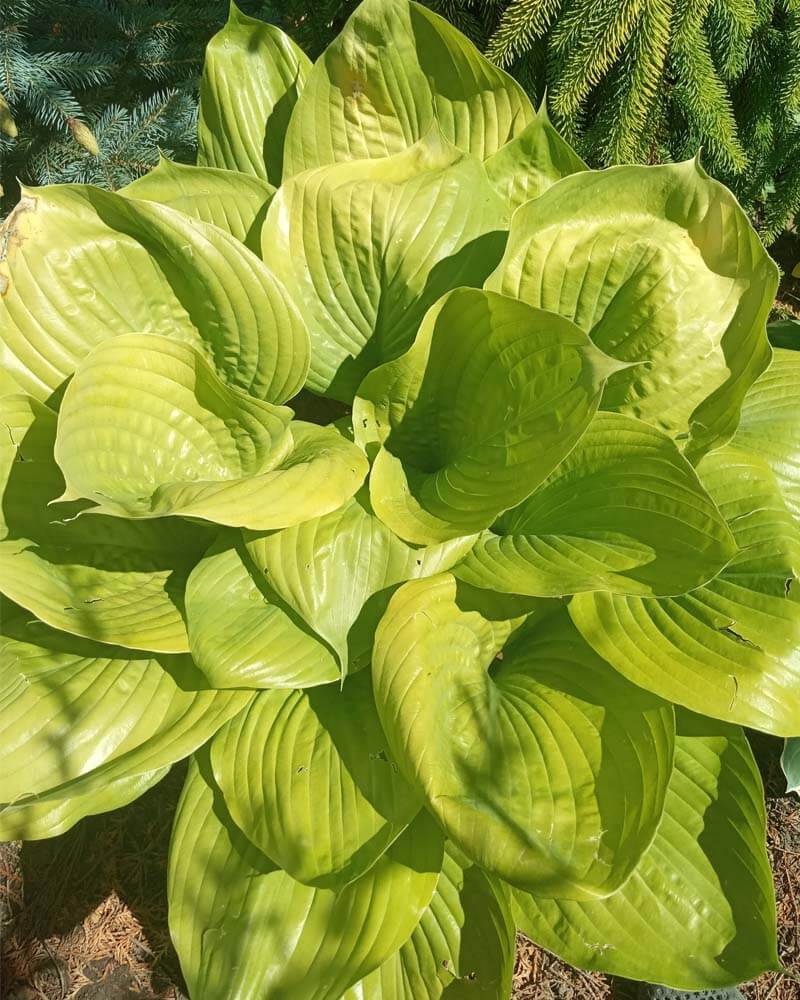 What is the most sun-tolerant hosta?

The most sun-tolerant hostas are those with yellowish-green leaves. Green hostas also do well when planted in a location with plenty of sun.

If we talk about varieties one of the most popular is Gold Regal Hosta. It has quite large leaves with an interesting ribbed structure. The leaf rim is green and the center is pale yellow.

Next is Carolina Sunshine Hosta. It has a broad yellow leaf border and a dark green center. The leaves are narrower and more elongated. The size of this hosta can reach 3 feet.

Sum and Substance Hosta cannot be overlooked here. This variety can also tolerate a considerable amount of direct sunlight and is probably the most well-known.

However, despite its sun tolerance, Sum and Substance does not do too well in the sun. Even in moderate climates, it can get sunburned if exposed to direct sun in the middle of the day. This is true of all hostas.

It follows that even the most sun-tolerant hostas cannot receive direct sunlight all day long. Also, just because a hosta is able to grow in a location with a lot of sun does not mean that it will thrive there. The sun will destroy much of the chlorophyll in the leaves and the growth rate will slow down a bit.

If this very hosta were to grow in a more shady location, it would be a little more vigorous. Also, the color of the leaves would be brighter and more vibrant instead of faded and pale. 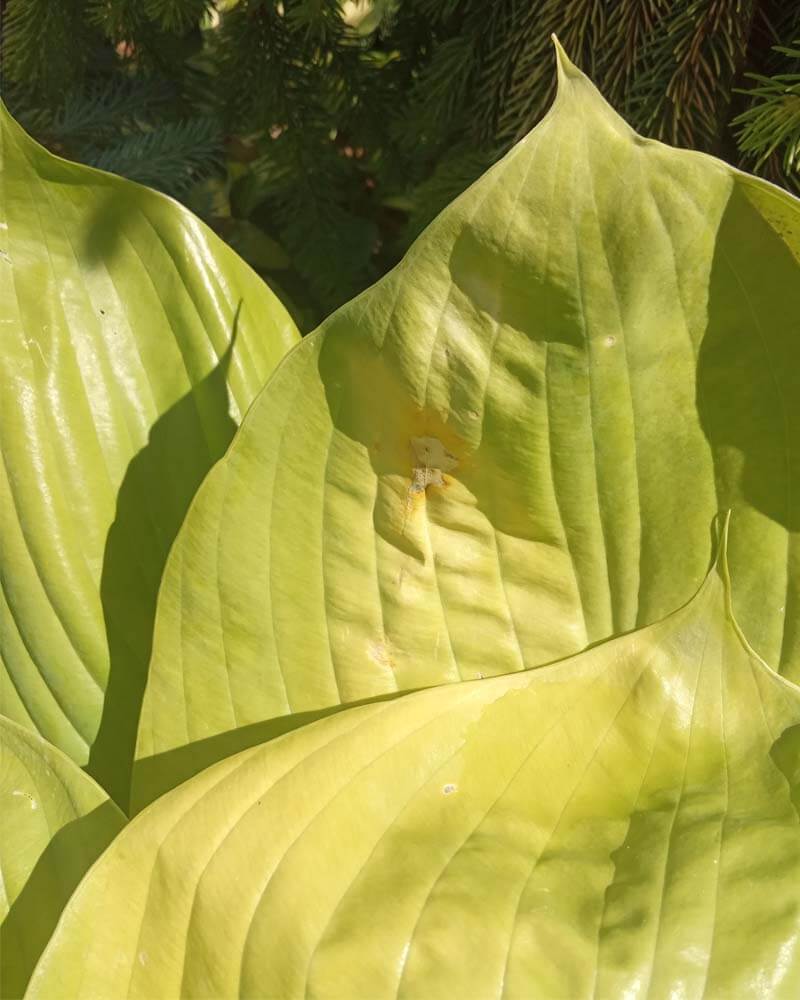 Sum And Substance Hosta got a sunburn.

How much sun can hosta handle?

A hosta can handle 2 to 3 hours of direct sunlight per day. This is true of most varieties.

Some hostas can tolerate 4-6 hours of direct sun per day. These varieties usually have yellowish-green leaves. This is not described in more detail in the previous chapter.

A big part of the relationship between a hosta and the sun is the hardiness zone in which it grows. In zones 3 and 4, hostas can tolerate slightly more sun hours. Whereas in zone 8, direct sun is almost contraindicated for the hosta.

Also, hostas should only get direct sunlight in the morning. The ground and air are still cool at this time. Therefore, the sun cannot do much harm.

But if the hostas are regularly exposed to afternoon sun, even a few hours can be devastating. In the afternoon, the ground and air heat up quite a bit. All of this can severely damage the leaves.

Read more: What light is best for hostas?

What happens if hostas get too much sun? 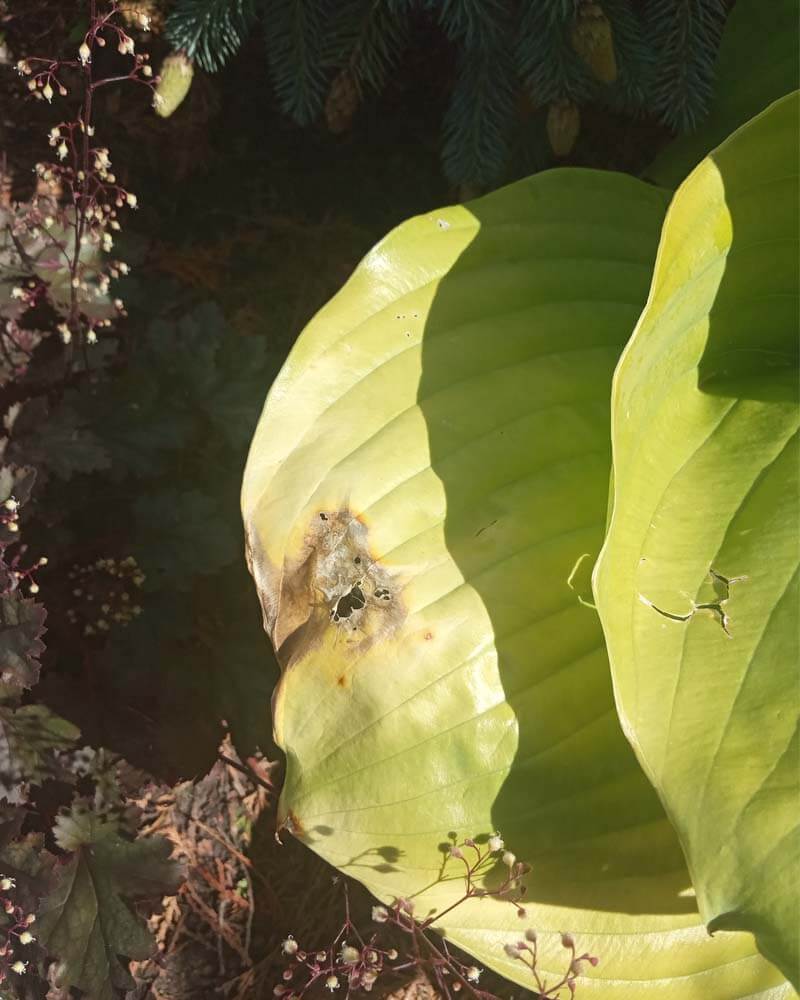 Sum And Substance Hosta got a sunburn.

The first thing that will happen if the hosta gets too much salt light is a burn. Symptoms of mild sunburn are yellowing of the leaves. Sometimes white areas may appear in the center of the yellowing.

With a more severe burn, large brown areas will appear on the leaves. Over time, these will become huge holes in the leaves. Sometimes half of the leaf may shrivel up.

As for the plant itself, it will stay alive, though it will stunt a bit. If you do nothing, next year everything will happen again.

If your hosta gets sunburn, water it with about two gallons of water. Then put some shade on it to keep it out of the direct sun completely.

Next year in early spring, transplant the hosta to a location with less sun or full shade. When transplanting, be careful not to damage the bush.

Read more: How do you fix a sunburned hosta? 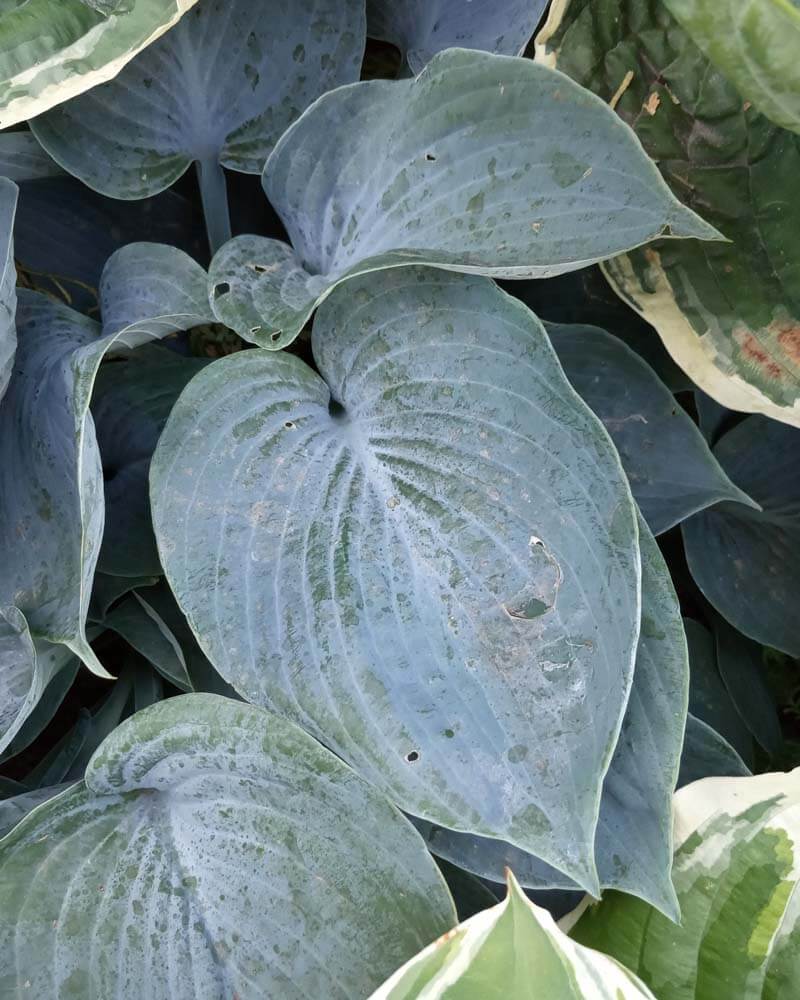 Blue hostas are the worst in direct sun.

Blue-leafed hostas are the worst performers in direct sun. In fact, their leaves are not blue but dark green and covered with a whitish epicuticular wax. This coating protects them from excessive light and gives them a bluish hue.

Blue hostas can only tolerate 1-2 hours of direct sunlight in the morning. With more light, they will turn yellow or get severe burns.

Variegate hostas are believed to tolerate direct sun. But this is only partly true. If we are talking about yellow-green variegation, then yes, these hostas can handle a few hours of direct sun.

But hostas that have a part of their leaves that is pure white do not handle direct sun very well. The chlorophyll-free white tissue is very easily damaged by direct sunlight, especially in summer. The more white variegation on the leaf, the less tolerant the hosta is to the sun.

How do you keep hostas in full sun? 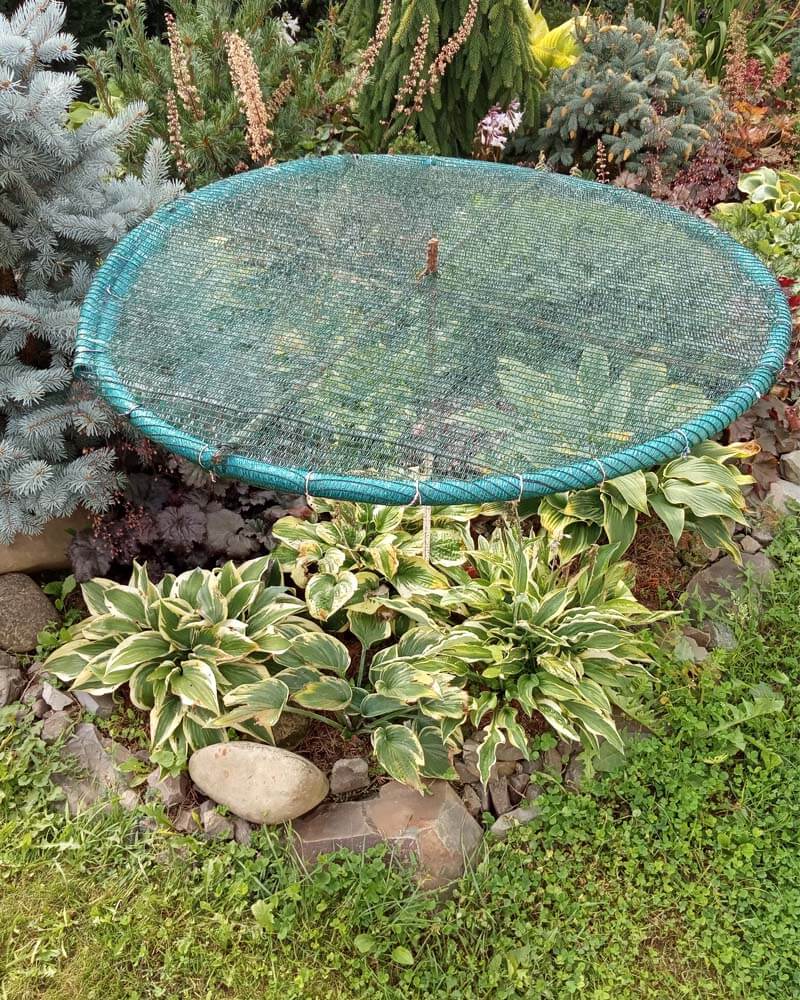 Create artificial shade over the hostas in full sun.

If you don’t have enough shade but want to have a lot of hostas then there is a solution for you. I ran into the same problem and found the solution by creating an artificial shade.

All you have to do is mount a simple framework over the hostas and put shading netting on top. Anything you can make into a frame will do metal rods, plastic tubes, or wooden sticks. 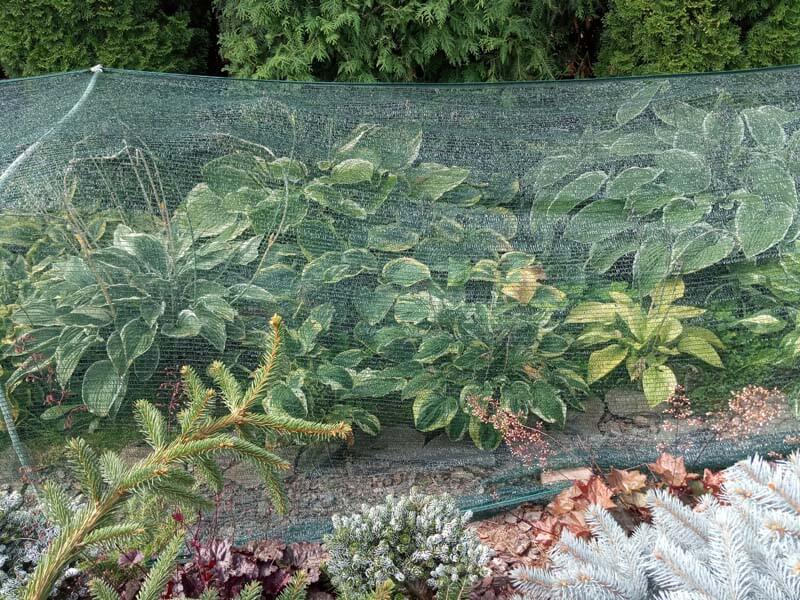 Create artificial shade over the hostas in full sun.

You can even use an old garden umbrella. Remove the fabric and replace it with a shading net. That’s it, a great shade for a hosta is ready.

Shading with garden umbrellas covered with fabric is not very convenient. First, the wind will constantly damage the open umbrella. Secondly, because the rain will drip away from the hosta and it may not get enough water.

For shading, a green or black shade garden net is best. You can buy it at any garden center or online. It provides what is called dappled shade, and it is the best type of lighting for a hosta.