All homeowners try to make their yard look beautiful and for this reason, they plant ornamental plants. At the same time, there may be a pet in the house, which often leads to various difficulties.

Hostas are poisonous to dogs because of the chemicals in the leaves. If your dog eats a hosta, it may cause him to vomit. To help your dog, take him to the vet immediately.

This is the short answer to this question. However, it is a rather large topic that needs to be examined in more detail. 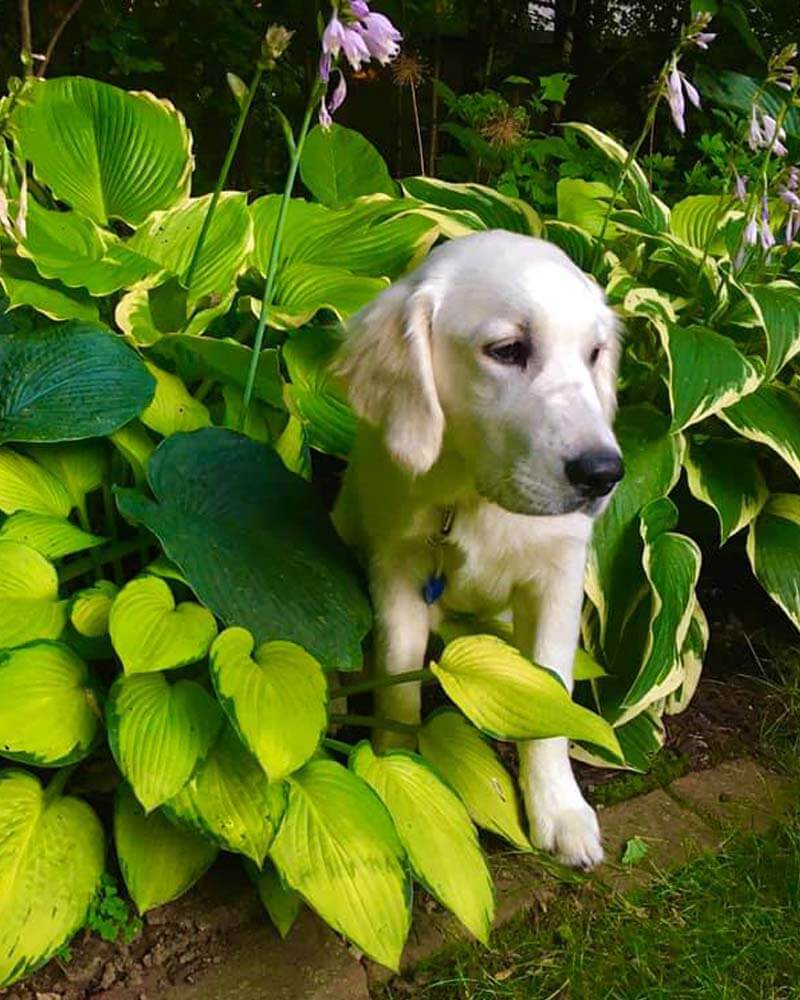 What happens if a dog eats Hostas?

Hosta contains toxic substances called saponins. Many other plants also have saponins in their tissues.

If a dog eats a hosta, it will most likely be poisoned. However, it is rarely fatal.

Much depends on the size of the dog and the amount eaten. For example, if you have an Anatolian Shepherd and he eats a small hosta leaf, you probably won’t even notice.

But if you have a small puppy who has recently eaten lots of leaves he might show symptoms of poisoning. You will learn more about this in the next chapter.

Symptoms of hosta poisoning in dogs

The first symptom of ingesting hosta into the dog’s stomach is vomiting. The dog’s body has defense mechanisms against poisoning and is able to remove the poisonous substance on its own.

The second is diarrhea. This is also one of the ways in which the body tries to get rid of unwanted content. In addition, along with diarrhea, there may be bloating of the animal’s abdomen.

One possible symptom is abdominal pain. A dog eating a hosta may feel severe abdominal pain and will let you know by whining pitifully.

Of course, during poisoning, the dog will lose any appetite and that is another obvious sign of poisoning. He may also have increased salivation or watery eyes.

Finally, if your dog is poisoned by a hosta you should see the destroyed bush in your garden or in the garden of your neighbors.

How long does hosta poisoning last in dogs?

Hosta poisoning can last from several hours to several days. It all depends on the amount eaten and how strong your dog’s body is.

Also, the poisoning may not show up right away. It may take several hours for the first symptoms to become noticeable.

In any case, you should not wait for the poisoning to pass. Instead, take your dog to the vet and he will take the necessary steps.

Once the vet intervenes, the effects of the poisoning will go away very quickly.

How much hosta is poisonous to dogs?

The hosta is quite poisonous to dogs. If a dog eats a hosta, it can be very painful.

But again, it all depends on the amount ingested. If the dog eats half a leaf, he probably won’t feel anything. On the other hand, if the puppy eats half a bush, he will almost certainly vomit.

In most cases, hosta poisoning is rarely fatal. If you don’t hesitate to take your dog to the vet, there should be no adverse effects on his health.

What should I do if my dog ate hosta leaves?

If your dog eats hosta leaves, the first thing to do is to give him plenty of water. Water will dilute the toxicity of the saponins that are found in the hosta tissue.

If your dog vomits or has diarrhea, let him do it. The more it comes out the better. The fewer pieces of the hosta remain in the dog’s stomach, the better.

The next thing to do is to take your dog to the vet. Only a veterinarian will be able to give her proper care.

The vet will examine the dog and listen to your story. He may give your dog activated charcoal or other medication to induce vomiting.

In severe cases, the dog will have to be kept in the clinic for further observation for some time. This is a wise decision, because if there are complications, your dog will receive expert care immediately.

But in most cases, you will be able to return with your dog the same day. The recovery process should not take more than a week.

How do I get my dog to stop eating my hostas?

To avoid your dog eating hostas, use a variety of repellents. Simply put something that has a pungent odor, such as kayenne pepper, near each bush. Dogs have a very keen sense of smell and will stay away from your hostas.

The second thing you can do is enclose the bed of hostas with plastic fence. The fence should be at least three feet high. A dog is not likely to jump the fence to eat a hosta.

One last thing is nutrition. Dogs often eat grass and leaves because of deficiencies in certain nutrients in their diet. Get advice from your vet or canine nutritionist on how to properly feed your dog.

What part of Hostas is poisonous to dogs?

Hosta leaves are the most toxic. In most cases, dogs will eat them and not the other parts. Even deer eat the leaves first and rarely the leaf petioles.

Hosta leaves are also dangerous because they may have been treated with pesticides or fugnocides. This increases their toxicity to the dog.

Are Hostas stems poisonous to dogs?

Hosta stems are toxic to dogs. Although the amount of saponins they have is lower compared to the leaves.

In addition, the amount of water in the leaf petioles is higher, which reduces the percentage of toxic substances.

However, don’t be under the illusion that if your dog eats hosta stems, he won’t be poisoned. The stems are just as likely to cause poisoning as the leaves, albeit to a lesser extent.

Are hosta flowers poisonous to dogs?

Hosta flowers are not toxic to dogs. This is because they contain nectar for bees and if they contained toxins, the bees would not pollinate the hosta.

The flower stems are another matter. This part of the hosta contains saponins just like the other parts of the hosta. Moreover, the flower stalks are denser and harder, so they have a higher concentration of substances, including saponins.