The variety of plants is endless. Sometimes it may seem that some plants are very similar, but a closer examination reveals that they are completely different.

The main difference between Heuchera and Tiarella is the leaves. Heuchera has more rounded leaves with a wide range of colors. At the same time, Tiarella has more dissected leaves of mostly green color. In addition, Heuchera needs less water and Tiarella likes wetter soil.

Further on in this article, you will learn in more detail about all the differences between these plants. If you want to know more about heucheras read this post. 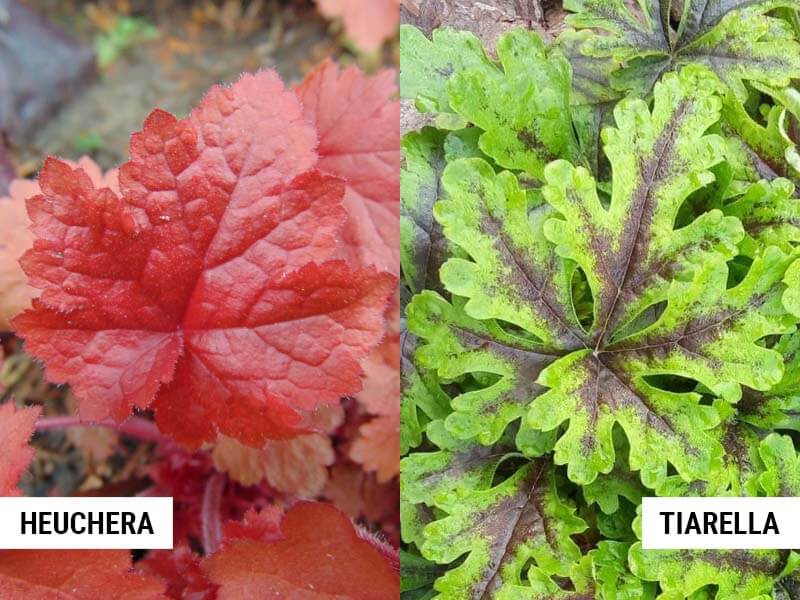 Both plants have leaves averaging 3-4 inches across. Heuchera villosa has some of the largest leaves.

Heuchera has more rounded leaves with shallow cuts. Some of the edges may be serrated, but overall the leaf is an undivided plane.

At the same time, Tiarella has leaves divided into lobes. In some types, the dissections are so deep that the leaf consists only of the lobes and the attachment point to the leaf petiole. Although some wild species have a leaf shape very similar to Heuchera.

The second significant difference is the color. Tiarella has mostly green leaves with various shades. Sometimes the center may be black or a darker shade of brown.

Heuchera on the other hand has a much greater variety of colors. You can find varieties from bright red to black. There are two and three-color Coral Bells, and even variegated forms. 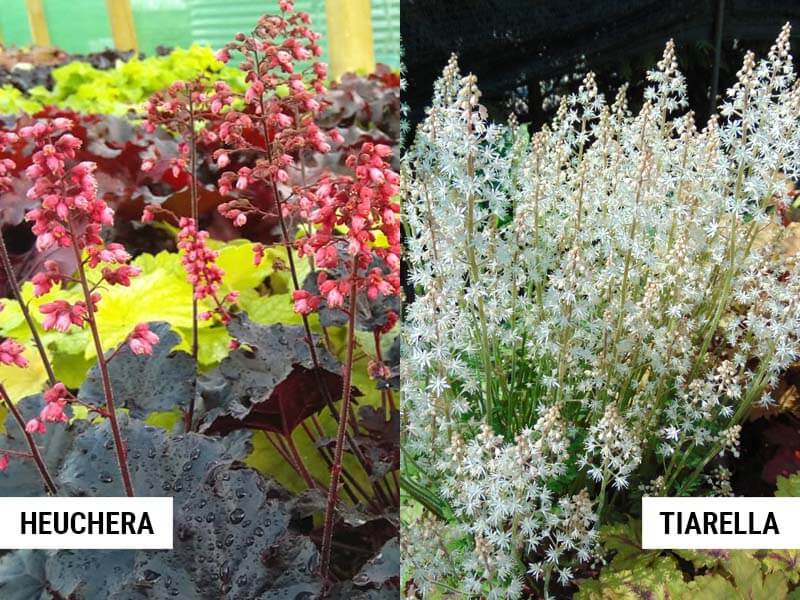 The second difference between these plants is the flowers.

Heuchera has flower stalks averaging 2 feet in height. The inflorescences reach about 3-4 inches in length. The number of flowers is small and also their size is very small. Some species have slightly more flowers than others.

As a result, Tiarella inflorescences look very lush and delicate. Nothing like Heuchera has to offer.

As for color, Tiarella has mostly white inflorescences, sometimes they may have pink tips. Heuchera has bright red or bright pink inflorescences.

Heuchera has a bushy growth habit. Its stem usually grows upright, lengthening only a few inches each year. New plants may form around the stem and it may branch out.

As a result, in a few years, it has the shape of a rounded bush. Only over time, if you don’t trim it, will the stem elongate and begin to curve sideways.

Tiarella can also have a bush shape, but it is usually more branched without a pronounced central stem. It also grows faster, with an annual growth of up to 8 inches.

There are also trailing forms of Tiarella. They can grow 1 to 2 feet per year. These varieties are very interesting to grow because you can get dangling plants.

Heuchera and Tiarella have slightly different watering requirements, which brings with it some other differences.

Heuchera likes water to run off quickly and not stagnate, but the soil must stay moist for a while. It does not tolerate clay soils well. So if you have clay soil in your yard you should improve it by adding a bucket of compost to the planting hole.

Water Heuchera when the soil is about 2 inches dry. But this does not apply to newly planted plants.

Tiarella, on the other hand, is more moisture-loving. It can grow in fairly wet conditions and can tolerate clay soil quite well.

It should be watered as soon as the soil is 1 inch dry.

Watering Tiarella in drought can be time-consuming, so drip irrigation is recommended.

Tiarella is a shade-loving plant, it absolutely cannot tolerate direct sun all day long. If you plant it in a place where it gets afternoon sun, the leaves will burn.

The best place for it is a full shade or 1-2 hours of the direct morning sun but no more.

Heuchera, on the other hand, is much more sun tolerant. The black, burgundy and purple varieties can grow in full sun all day without burning.

The brighter Coral Bells (reds, pinks, oranges) need partial shade. They are best planted so that they only receive direct sun during the first half of the day (up to 6 hours).

There are also varieties that do not tolerate direct sun. These include yellow and light green heucheras. They must also be planted in full shade and can only tolerate about 2 hours of direct sun from early morning.

And the last difference is resistance to disease.

Since Tiarella leaves are mostly green it means that they have more chlorophyll. Such leaves are more resistant to disease. In the first place, this applies to fungal diseases.

Heuchera has colorful leaves but it is a bit more susceptible to disease. This is especially true for rust.