Maples are extremely popular plants. The interesting shape and color of their leaves make them a favorite of the vast majority of gardeners.

A large number of species and an even larger number of varieties make the selection process really difficult.

Today we are going to talk about Crimson King Maple. You will find out if this tree is worthy of your garden. I will tell you about its advantages and disadvantages. But first, let’s dive a little bit into the history.

Acer platanoides (scientific name of species) ‘Crimson King’ was obtained as a seedling in the 1930s in Europe. Twenty years later it appeared in the USA and was mass propagated for ornamental use.

The species Acer platanoides has another name – Norway Maple. It is widely distributed in Europe and Asia. Many other cultivars are also worthy of attention, but we will talk about them some other time. 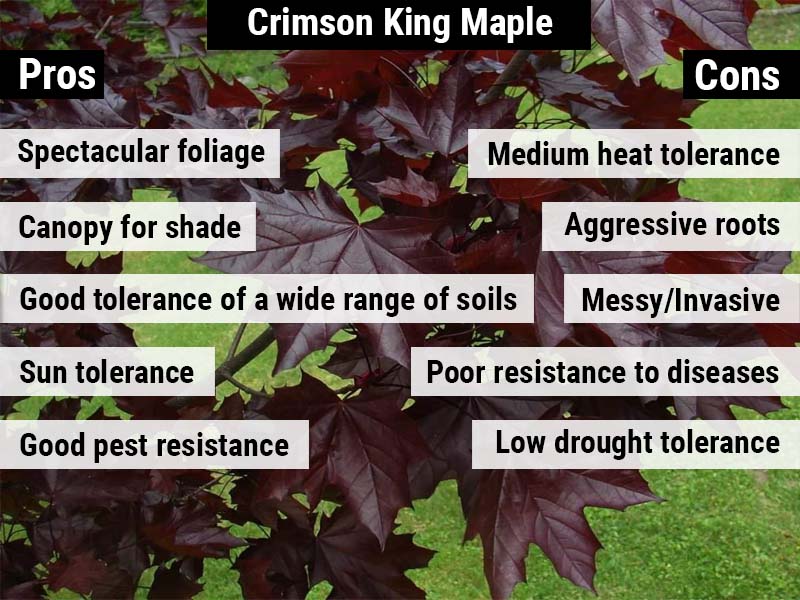 The pride of Crimson King Maple is its foliage. It has very interesting leaves, which is the main reason for choosing this particular variety.

The leaf measures 5 inches long and the same width. The leaf blade is divided into five lobes, the cuts are deep and the leaf looks very sharp.

But the main thing here is the color. When unfolded, the leaves are bright purple in color and glossy. Over time, the gloss loses a little and the color becomes slightly darker.

A distinctive feature is that the color lasts all season until fall. While some other varieties lose a little color in summer and become greenish.

Also, the color holds up well in the northern states where there is less sun. After all, it is the sun that is the cause of the bright color of many plants. The same is true for planting in the semi-shade. If this maple only gets direct sunlight half the day it will still have beautiful color.

If you think this is the end, no the fun begins in the fall. This is the time of year when Crimson King really turns crimson. Then the color changes to burgundy, then to other shades of red, and eventually, it falls to brown.

The second reason for choosing Crimson King Maple is its thick and wide crown, which can provide good shade.

It reaches a height of over 45 feet and a width of 35 feet. It is quite a big tree and this must be taken into account when planting.

The width of the maple and its dense foliage will provide full shade at its base. The shade will be large enough to make a place to rest or for other purposes.

Another advantage is the slow growth rate. As a result, you will not have to cut it back often if it is too big. You need to keep in mind that after many years of growing it can reach the size of a wild Norway Maple.

Pro: Good tolerance of a wide range of soils

An undoubted advantage is a tolerance to different soils. Norwegian maple is distributed over a huge part of the planet and as a consequence can adapt to different types of soil. The same is true for Crimson King.

The first thing worth noting here is tolerance to heavy clay soils which are characterized by stagnant moisture. This is an acceptable situation for this tree because it can absorb and evaporate a lot of water. As a result, there are no problems with the roots, which cannot be said about some other trees.

The situation is similar with loam, it will grow well there. But with sandy soil, it may have a little trouble because the maple may not have enough moisture. In this case, you need to water it regularly.

The acidity of the soil is also not very important. Neutral, slightly acidic, or slightly alkaline soil is equally suitable for growing Crimson King maple.

This maple tolerates different types of sun well. The main thing, of course, is tolerance to full sun. If you grow it in 4-6 USDA hardiness zones, it can grow in direct sunlight all day without problems. But at 7, lots of sunlight can be a bit of a problem, so you need to water it more often or plant it in partial shade.

A half-shade is also an acceptable place for it. In this case, it will even have a bright leaf color. What can not be said about some other maples, which at the slightest shade lose their color and turn green.

The only thing you need to avoid is full shade. Because in this case the plant will have burgundy-green leaves and the crown will be loose. It can also have problems with fungal diseases.

Crimson King Maple should get at least 6 hours of direct sunlight per day.

A distinctive feature of today’s maple is good resistance to pests. It is almost not damaged by insects and even more so by mites. Although this is a feature of all Norwegian maples.

The first thing to mention here is aphids because on some trees this can be a serious problem. But this pest is rarely seen on the leaves and branches of Crimson King and even if the damage is done, it will not be significant.

The second is scale. This is a bit more of a problem because it is not easy to control. But maple trees have their own repellent that keeps colonies from growing too large.

Nevertheless, you should always check your plants for pests and if they are present, treat them with horticultural oil or pesticide.

Unfortunately, Crimson King has some disadvantages, the most important of which is trashiness. The first batch of plant debris you get at the end of spring when the flowering period is over. On the surface will be a lot of small flowers that do not cause much discomfort but still.

The second is the seeds. The number of seeds is quite significant. They are twinned and have wings. As a result, the wind blows the seeds a long distance and they can cover a large area. But the worst thing is that they can germinate everywhere.

In fact, that’s another problem. The Norway maple is considered an invasive species. Its seeds spread very quickly and the species take over new areas. The same is true of the Crimson King. If you choose it, you will have to clear your yard of its seedlings regularly.

And finally, in the fall you will get maximum debris when the leaves have fallen. While this is true of most deciduous trees, Crimson King is more generous with the amount of fallen foliage.

The Crimson King Maple root system is a real challenge for the gardener. It is almost impossible to grow anything under this tree. The fact is that it has a large number of shallow surface roots that absorb a lot of moisture and displace other plants.

Sometimes it is even difficult to grow grass under this tree. Because the grass will lack moisture and sunlight.

But if you want to, some of the shade-loving plants can still be grown under it. The first thing to do is to choose only strong and vigorous plants so that they can compete with the maple roots for resources.

Second, you need to trim the maple roots at least once a year. This can be done with a shovel. As a result, the tree will not intensively create roots on the surface.

Also if the Crimson King Maple reaches a large size at maturity it can damage buildings if it is planted too close. For this reason, plant this cultivar no closer than 20 feet from the house.

This maple has poor immunity to disease especially fungal diseases. Due to the thick foliage and large, broad leaves, fungal spores are easier to develop.

The most common disease is powdery mildew. It looks like white spots on the leaves. Once infested, the fungus spreads quickly and can cause significant damage. Maples that grow in humid and low-sun climates are, particularly at risk.

To cure a diseased maple you will have to spray it several times with a fungicide designed to fight the disease. When the plant is young it is not difficult to do, but if the tree is large then you have to spend a lot of effort.

So the disease susceptibility is a definite disadvantage of this variety.

Crimson King Maple can be grown in 4-7 USDA hardiness zones. There are also examples of successful growth in zone 3. That is, with frost hardiness in this variety is all right, which cannot be said about heat hardiness.

Unfortunately south of zone 7 you will not be able to enjoy the shade of this maple. Moreover, as I said before, it will also be a bit hot in zone 7 and you will have to provide partial shade at least during the first few years of this maple’s life.

From all of this, it follows that a good portion of US gardeners will not be able to plant Crimson King Maple in their garden.

The last disadvantage is a weak resistance to drought. This maple actually loves moisture, it can even tolerate short-term stagnant water in the ground. This is due to the large area of foliage and consequently the evaporation of a lot of moisture.

The best place to plant would be where water collects, but that does not mean you can plant it in a swamp. The wetter the spot, the less you have to worry about watering. This is especially important in a 7 USDA hardiness zone or sandy soil. In these conditions, Crimson King Maple will definitely need watering.

Also, the first year after planting you need to water the young trees no matter what climate you live in.