What an interesting aloe plant it is. Long leaves with or without thorns, many tubercles create a unique effect. There are even varieties with red tubercles available today! Nevertheless, problems often occur with this plant.

Lack of water, excessive watering, intense sunlight, and improper fertilization are the main causes of aloe turning yellow. To fix the yellowing, water aloe when the soil in the pot is almost completely dry and fertilize the plant no more than twice a year. Also, move the aloe to a place with partial shade and make sure it’s not too cold. 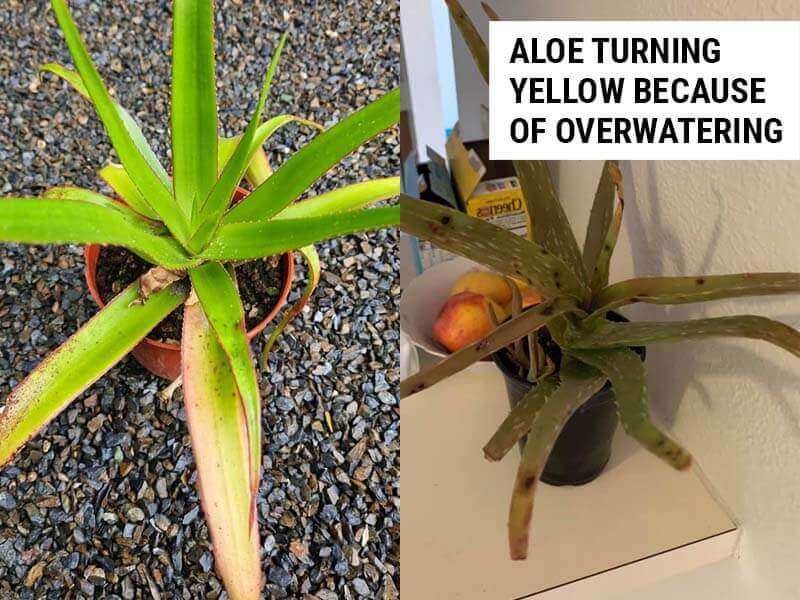 Aloe turning yellow because of overwatering.

It is very common for aloe to turn yellow if it is over-watered. Roots in constant moisture begin to rot. As a result, the leaves turn yellow from the base and upwards along the blade. The leaves also become soft and may even become a little transparent.

To fix this you need to take the aloe out of the pot and clean all the soil from the roots. Next, inspect for rotten roots and if so, remove them. Wash the roots with fungicide and dry them for a few hours.

Next, plant the aloe in loose and well-drained soil. The best option is a purchased succulent soil mixture. You can also make your own soil, but it must contain perlite, small stones, and other ingredients that make it less heavy.

The pot should have a lot of drainage holes through which excess water will escape. But the holes are also needed so that the roots get more air.

To avoid overwatering, you should allow the potting soil to dry out halfway before watering. The easiest way to check the moisture is to use your fingers. 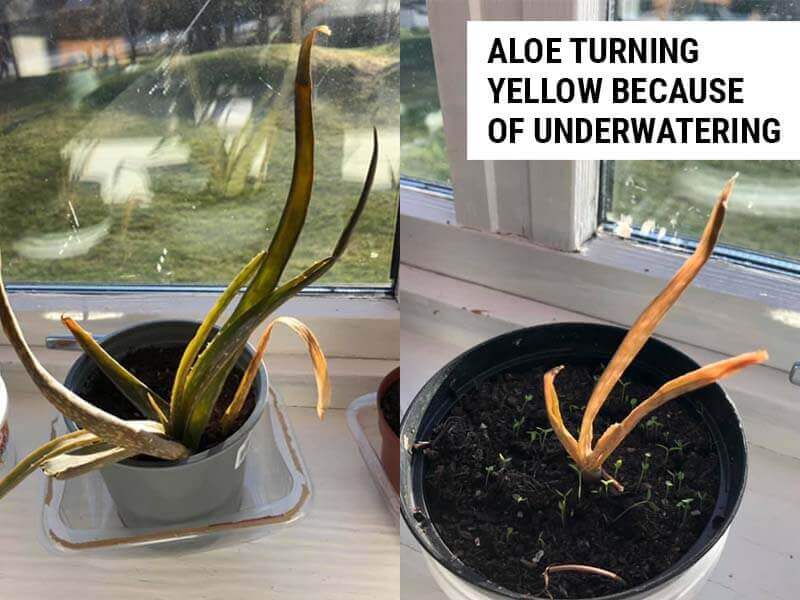 Aloe turning yellow because of underwatering.

Lack of water can also lead to yellowing of the aloe. In prolonged drought, the water supply in the leaves begins to run low and the yellowing begins at the tips and extends to the entire leaf. The leaves become soft and curl slightly.

There can also be cases where, in the absence of watering, the aloe suffers from a lack of nutrients because it is supplied by water. As a result, photosynthesis slows down even though the plant may still have an internal water supply. In this case, the aloe turns uniformly yellow.

In fact, aloe is succulent and can do without water for a long time, but this does not mean that it will thrive. You need to water the aloe as often as it needs. Water the aloe when the soil dries out to about half the depth of the pot. You can use a soil moisture meter to determine when to water.

If you grow aloe in a lot of sun and a hot climate, you will have to water it quite often. Whereas in northern states, watering should be less frequent. You will also need to reduce the frequency of watering over the winter.

Also, mature aloes can store more water than young ones. Therefore, they should be watered less frequently than young plants. 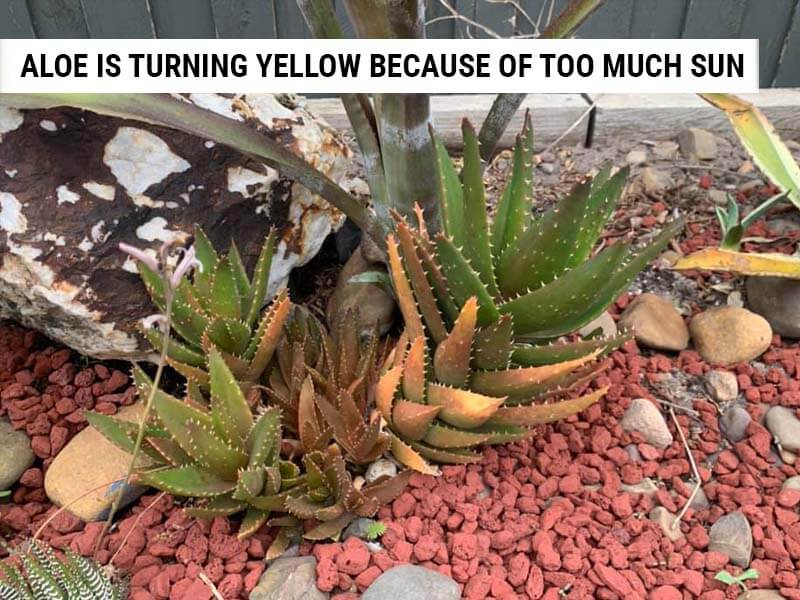 Aloe turning yellow because of too much sun

Improper lighting can cause aloe leaves to turn yellow. This plant needs 12 hours of direct sunlight, but if there is too much sun, problems can occur.

In most cases, aloe grows in a south-facing window or on a balcony. It is also common for owners to take this plant outdoors in the summer. In all these cases, the aloe gets the maximum amount of light and everything seems to be fine. But if the weather is too sunny and hot, the leaves can get burnt. This is especially true if you take it out of the house to grow it outside.

To avoid this, accustom your plant to the new amount of sun gradually. Also, when the heat is too intense, place the aloe so that it has a little shade. When the heat subsides, return it to its old location.

In winter, the aloe needs much less light. So you can even put it on the east or west window. Find out experimentally exactly how much light your plant needs at different times of the year.

If you don’t have a place with enough light, the aloe can also turn yellow because the photosynthesis isn’t working properly. In this case, you need to install artificial lighting for your aloe.

Aloe turning yellow because of cold.

When the ambient temperature drops to 50-53 °F, the aloe will stagnate and its leaves will become a bit pale. But if the temperature change is drastic, the leaves may turn yellow.

Abrupt changes in temperature often occur if the aloe is grown outdoors. It can be hot during the day, and the temperature can drop dramatically at night. To avoid this, you should only take the aloe outdoors if you are sure it will be warm at night.

The temperature in the room where the aloe is grown should be at least 64.4°F. Also, avoid placing the aloe near heaters or air conditioners.

Too much fertilizer is often the cause of yellowing and then dying aloe leaves. At first, the plant will grow faster than usual and become sluggish and soft. Next, the roots can be damaged by direct contact with the fertilizer and, as a result, some of the leaves will begin to die off.

To remedy the situation you will have to transplant the aloe to a different soil. Simply pull the plant out of the pot and shake off all the old soil. Then get a good succulent potting soil and plant the aloe in it.

The first year after transplanting, you don’t need to fertilize the aloe. After that period, fertilize no more than once or twice a year. It will be better if you use a specialized fertilizer for succulents. Usually, such fertilizers contain everything necessary for aloe to thrive.

Do not fertilize aloe in autumn and winter because the plant is dormant at this time. If you fertilize it, it can start to grow and become very depleted by spring.

Diseases as a cause of leaves turning yellow 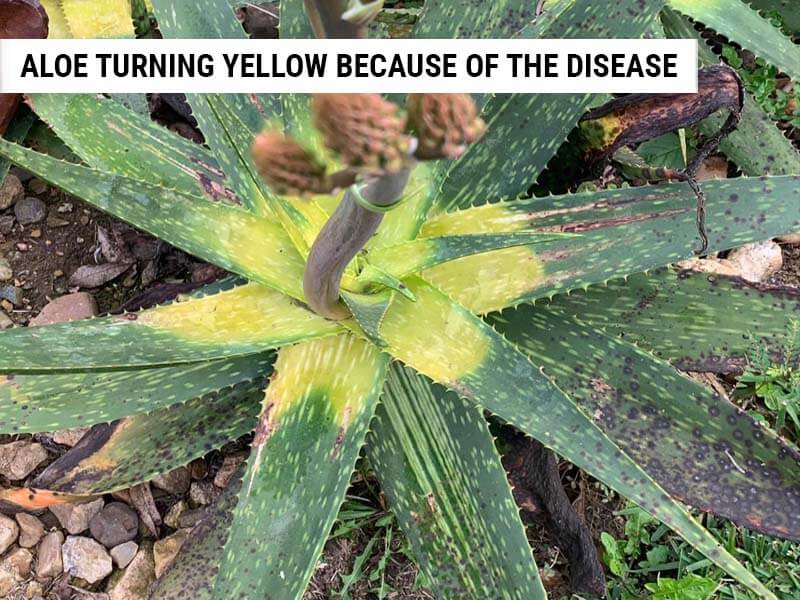 Aloe turning yellow because of the disease

The next thing that often causes aloe to turn yellow is a disease. First of all, it is a root rot that occurs when the plant is overwatered. How to deal with this I have already written above.

The next disease is dry rot. When it affects aloe leaves begin to turn yellow, dry out, and curl. The rate of development of this disease is very high. Unfortunately, there is no way to save aloe, all you can do is to take a few healthy leaves and root them. To avoid the disease, ventilate the room well and keep a proper watering schedule.

There are also a number of other pathogens that affect aloe leaves. As a result, spots will appear on the leaves and they will start to turn yellow. In the early stages, while the leaf is not too damaged, you need to spray aloe with fungicide 1-2 times and the disease will recede. In the future, follow all the recommendations of the aloe not to cause stress, because stress is the first cause of disease. 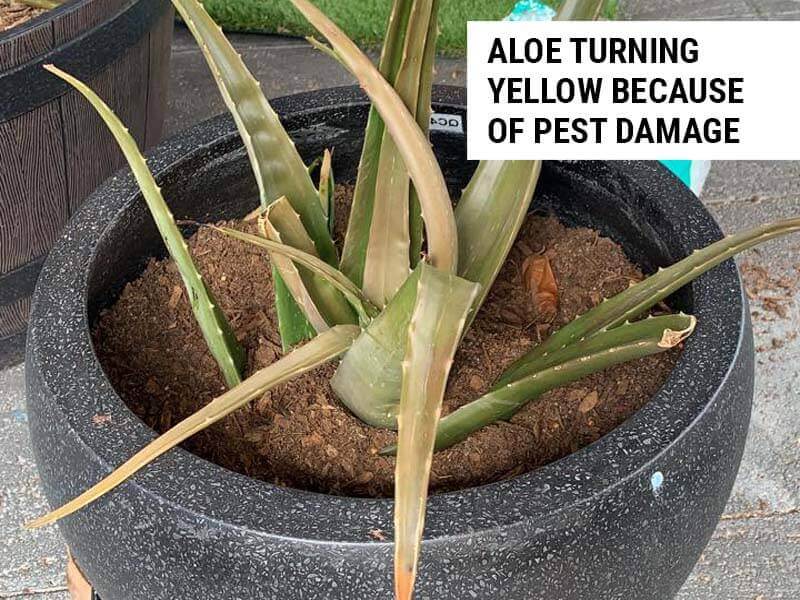 At the end of the article, let’s talk about pests that can also cause aloe to turn yellow.

The first type of pests are insects, including aphids, mealybugs, scale insects, and others. They suck on aloe leaves and feed on the sap. As a result, the plant turns yellow and the leaves die off.

The second type of pests is spider mites. They also feed on aloe sap, but they are very small and hard to spot. A good indicator of the presence of mites is the thin cobwebs on the leaves. To get rid of this pest you need to spray the plant with acaricide.