So much has been said about Water Lily and Lotus. But nevertheless, not a single page on the web gives a complete answer to the question of the difference between these plants. We have to collect the information bit by bit to determine all the aspects that distinguish them. I created this article to make your search easier, so let’s get started.

The main difference between the Water lily (Nymphaea species) and Lotus (Nelumbo species) is that the flowers and leaves of the Water Lily grow on the surface of the water while the leaves and flowers of the Lotus, grow above water. The Lotus also grows up to 6 feet tall, while the Water Lily is only 8 inches tall.

Water Lily is more hardy than Lotus which means that it is more widespread. In addition, the leaves of the first have a cut from the edge to the center, while the leaves of the second have no cut. Water Lily seeds ripen underwater and Lotus seeds over water.

Of course, these are not all the differences between water lily and lotus, so here I will describe everything that sets these plants apart from each other in as much detail as possible. 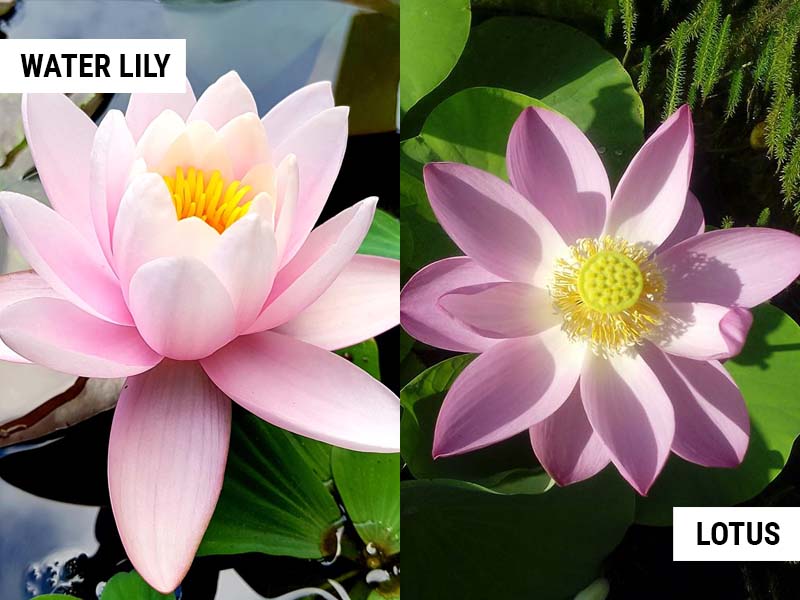 As I mentioned above, the lotus keeps its flowers above water while the water lily flowers float on water. But this does not apply to the tropical water lily, these plants as well as the lotus have stronger stems and their flowers grow above water.

The height to which lotus flowers rise above water depends on the species and variety. On average it ranges from 4-6 feet in a real pond and 2-3 feet in a plastic one. At the same time, tropical water lily flowers do not rise more than 8 inches above the surface.

The next noticeable difference between the flowers in the center. The water lily has the typical center of most flowers, that is, the pistil and stamens are placed there. At the same time, the lotus has an androecial ring in the middle of the flower, which looks quite unusual and gives some decorative value.

Since the water lily is a genus of plants, it includes many species. The flowers of some species are very similar to lotus flowers and some are less similar.

The same goes for size, most water lily flowers are slightly smaller than lotus flowers. The lotus flower can reach 1 foot across, although there is a species of water lily called Victoria amazonica that has similarly gigantic flowers.

Both lotus and water lily have fragrant flowers. The scent of each species is slightly different, but it is generally pleasant.

Another small difference is that the seeds of the water lily mature underwater. Whereas lotus seeds are above water, but we will talk about this later in a separate chapter.

In addition, both of these plants have a large palette of colors in which their flowers can be colored. We will talk about this in more detail in the chapter on varieties.

Leaves have a number of differences

At the beginning of the article, I said that the lotus has leaves that rise above the water surface, but this was not an exact statement. It actually has three types of leaves.

The first type is the underwater leaves, which do not grow very deep from the surface. The second is floating leaves like water lilies. The third ones grow on sturdy but flexible stems above the water. In the wild, leaf petioles can reach five feet or more.

The water lily has only one type of leaf that floats on the surface of the pond. Some leaves may be partially or completely submerged in water but overall this is not typical of these plants. 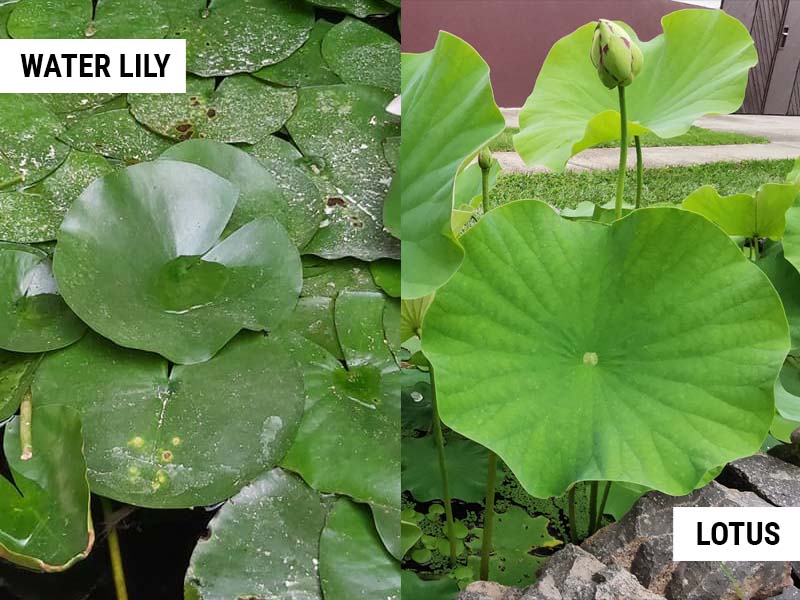 The second difference in foliage is that most water lily species have a cut from the edge of the leaf to the center. Through this cut, the water which has fallen on the surface drains into the pond.

Lotus leaves do not have such a cut. Moreover, they are not flat like the leaves of a water lily but have a deepening in the center where water collects. Thanks to the flexible stems and the wind, this water successfully falls to the bottom.

The shape of the leaves in both plants is round and very much like a plate. Some lily species have small leaves, usually less than 12 inches in diameter, while most have an average leaf size of 20 inches wide.

Lotus, on the other hand, have larger leaves and can exceed 30 inches in diameter.

Here I should mention again the Giant water lily (Victoria amazonica) because it is the absolute record holder, its leaves can reach over 10 feet across! Another feature is the low rim around the edge of the leaf.

The taxonomy of these two plants is quite confusing, so let’s sort it out.

The scientific name of the lotus is Nelumbo. This genus includes only two species, Nelumbo nucifera (sacred lotus) and Nelumbo lutea (American lotus).

The water lily has another name, Nymphaea. It is a genus of plants that includes about 70 plant species. Obviously, the species diversity of this plant is much wider than that of the lotus.

Although the lotus has a much smaller number of species, its variety diversity is no less than that of the water lily. Breeders all over the world have done a gigantic job of hybridizing and selecting new forms of lotus. Thanks to this we can now see some truly fantastic varieties of this plant.

Most lotus varieties have wide petals and colors include white, all shades of pink, light yellow, and red.

One of the most unusual lotus varieties is the Nelumbo Thousand Petals syn. Qianban Lian. It has a huge number of pink petals. The flowers of this plant somewhat resemble double peonies. Or another similar variety, the Ultimate 1000 Petal Lotus, which also has countless petals. 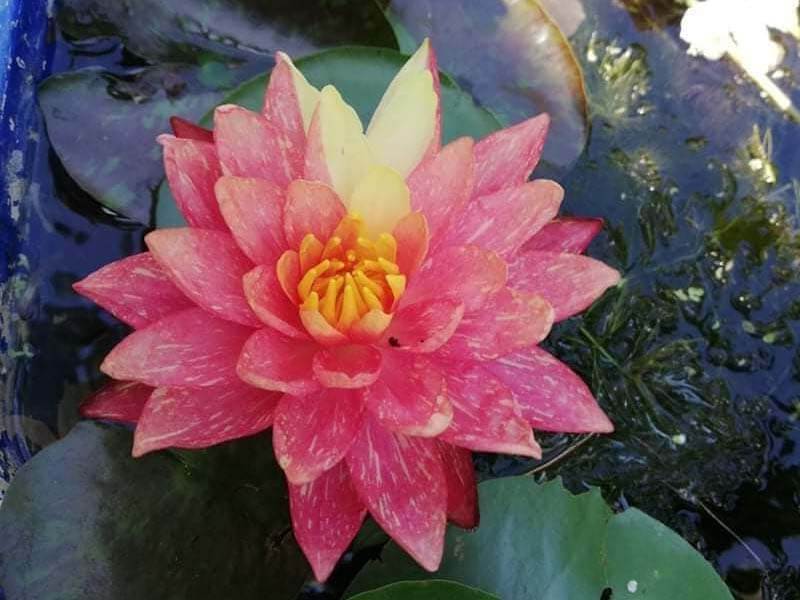 The water lily, at the time of this writing, does not offer such unusual flower shapes. But it too has something to surprise you, such as the Nymphaea Blue Aster. This variety has narrow petals with sharp tips. Their color is bright blue with a yellow center. Such a combination of colors lotus, unfortunately, does not have.

Another unique variety of water lily is Nymphaea Wanvisa. This variety has a combination of yellow and red colors. Very often the flower is colored half in yellow and half in red, such a bicolor effect has not yet been seen in the lotus.

Lotus has a limited habitat. Nelumbo nucifera is native to most parts of Asia; it is not found anywhere else in the wild. Nelumbo lutea grows mostly in North America, but it can sometimes be found in Central America.

The water lily has a much wider range. Different species of these plants are scattered all over the world. It is native to the United States and Canada. Nymphaea alba is common almost all over Europe. Nymphaea caerulea’s home in Africa, Madagascar, and much of Asia. Nymphaea amazonum grows in the tropical forests of South America.

Due to a large number of species, the water lily has been able to adapt to a wider range of habitats. This has influenced the hardiness of this plant. Different species of this plant can be grown from 4 in the north to 11 USDA hardiness zones in the south or even further south. But tropical lilies can be grown in zones 9-11.

At the same time, Lotus is recommended to grow no further north than zone 5. This means that it is not available to some aquatic plant connoisseurs.

Giant water lilies aside, Nymphaea and Nelumbo are about the same width. One plant averages five feet in width.

It follows that the lotus needs a stronger root system to hold its mass, which is not only larger but also more susceptible to wind and rain.

To successfully grow a lotus you need at least a bigger pot with more soil. You also need to feed it more often than a water lily. In case you want to get a lotus with a maximum size of leaves and flowers you have to grow it in a big pond with a natural bottom so that the roots have room to develop. 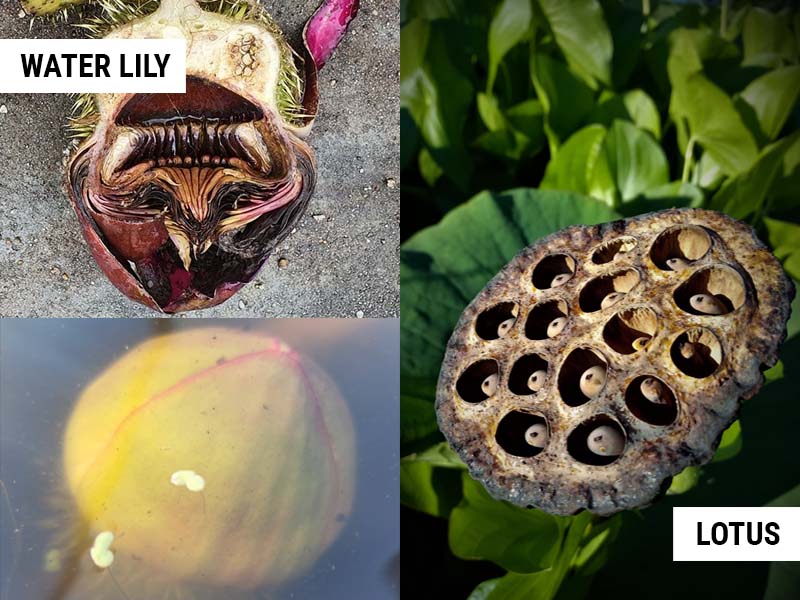 Lotus and water lily flowers bloom for an average of 3-4 days. After pollination, the petals wither and the seed ripening process begins. In fact, this is another big difference between these plants.

Lotus seed ripening is very similar to the seed ripening of most flowers. The flower transforms into a seed pod after flowering, ripening takes place over the surface of the water. After ripening, the seeds fall into the water and are carried away by the flow of water or animals.

All is different with the water lily. After flowering, this plant begins to form a seed pod and drops it under the water to a shallow depth. Once mature, the pod opens and the seeds float out.

The seeds of both plants are widely used in cooking. Their nutritive value is very high. They are fried, boiled, milled, and even made into snacks.

At all times the symbolism of the water lily has had different meanings.

Nowadays the flowers of this plant are national plants or depicted on the coats of arms of several Asian countries. This symbolizes that many people revere the water lily and consider it positive.

In ancient times the water lily was also depicted on the coats of arms of some European countries, which is also rather positive than negative as at that time people were much more religious than now.

But it was not always so, for example in ancient India this flower was considered a symbol of sadness and separation. It was also associated with other negative images.

Lotus, on the other hand, is a whole other level. It has always been a symbol of divine grace. It had a special reverence in ancient Asia.

In Buddhism, the lotus was depicted as a throne for the gods. Also, images of the Buddha often contain images of the lotus. This symbolizes that the lotus is considered a divine plant.

In many countries, the feature of lotus seeds to stay alive for a long time is considered a symbol of longevity and eternal life.