Little Gem is one of the most unique magnolias. Its white flowers are simply stunning against the green foliage. Today we will compare this magnolia to other similar varieties.

The second difference is size. Little Gem is a larger plant that can reach 20 or even 25 feet tall and 10 feet wide. Alta usually does not grow taller than 18 feet and wider than 9 feet. It follows that Alta Magnolia is better suited for small yards. 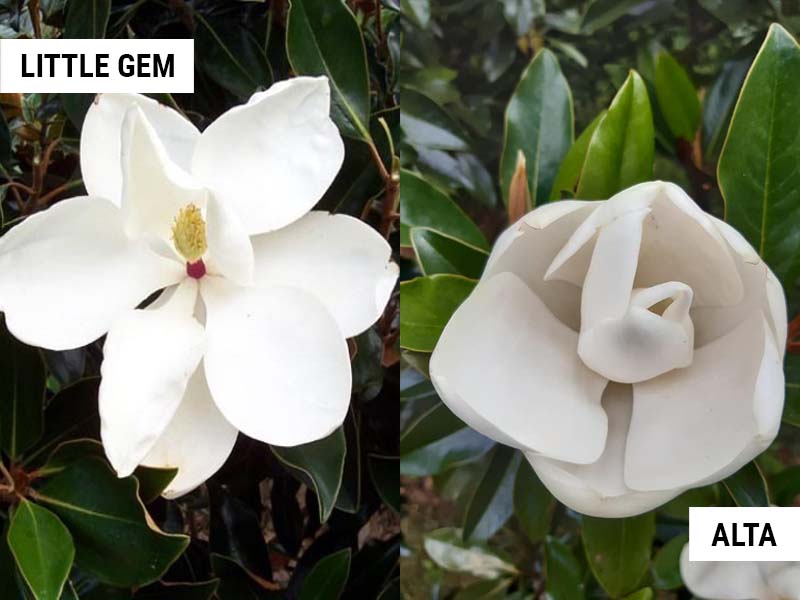 The next thing that differentiates them is the size of the crown. Southern Magnolia is a much larger plant, it can easily reach a height of 80 feet or more and a width of 40 feet. Little Gem Magnolia is more modest in size, usually 20-25 feet tall and 10 feet wide. When choosing, you need to realize that the Southern Magnolia needs a lot more room to grow normally.

Southern Magnolia needs a strong root system to support a large crown. This means that the roots of this tree can be considered as invasive. If the Southern Magnolia is planted too close to foundations or other concrete structures then it can damage them. On the other hand, this does not happen to Little Gem Magnolia because its roots are not as big and powerful. 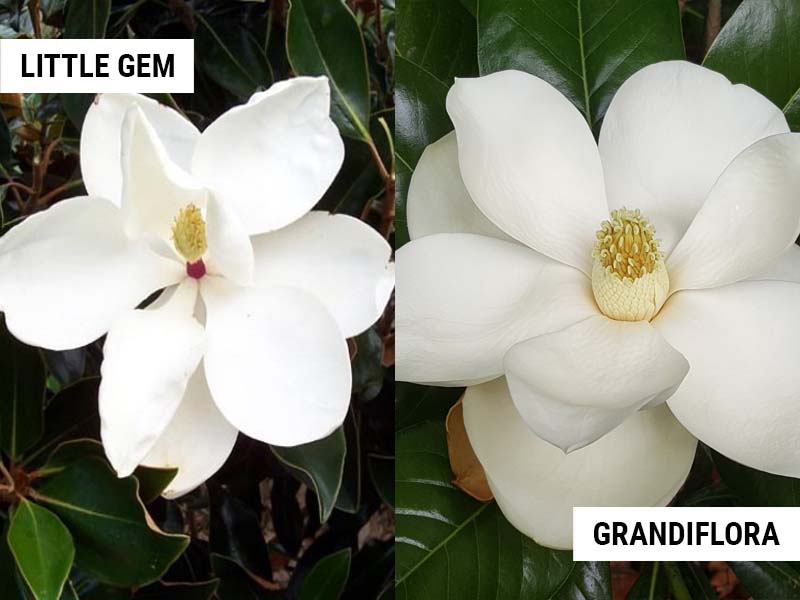 The color of the underside of the leaves is what most distinguishes Little Gem Magnolia from Kay Parris Magnolia. Little Gem has a greenish-brown, almost smooth underside. At the same time as Kay Parris has a bright orange-brown underside, in addition, its structure is velvety. In this respect, Kay Parris is much more ornamental than Little Gem although the leaf size is approximately the same.

The second difference is the crown. Both plants are about the same size, 20 feet high and 10 wide. They have a multi-branched structure, but the Kay Parris Magnolia has stronger branches that can withstand heavier loads. This is especially important in cold climates, where Little Gem will break or bend, Kay Parris can easily take it all.

Kay Parris is also a little hardier, it can be planted from USDA hardiness zone 6, whereas Little Gem should not be planted north of zone 7. It follows that Kay Parris is available to a wider range of gardeners. 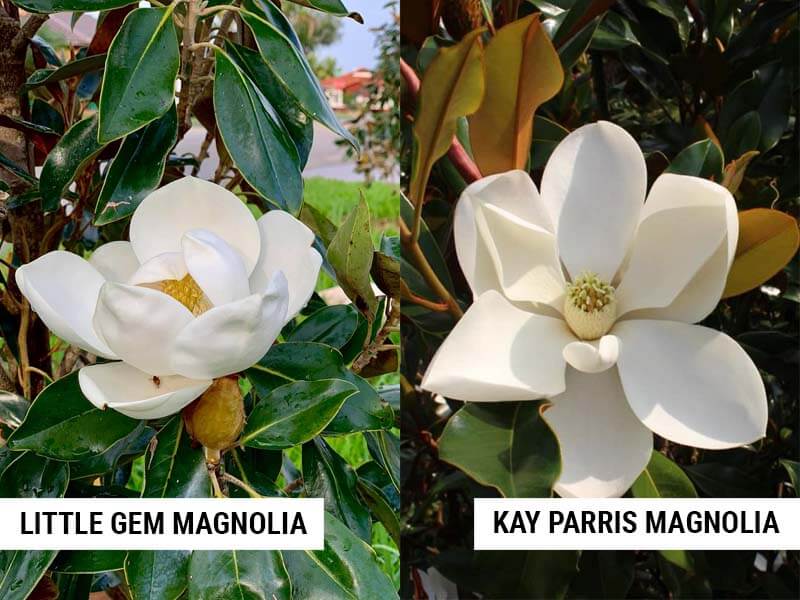 If you want a wide canopy for shade quickly, the D.D. Blanchard Magnolia is better suited for this than a competitor. But you have to remember that a big tree needs a bigger area and should be planted a considerable distance from buildings. Also, the bigger the tree the more trash there will be in the fall.

In addition, the leaves and flowers of Blanchard Magnolia are larger than those of Little Gem. This makes it more interesting in terms of ornamentality. 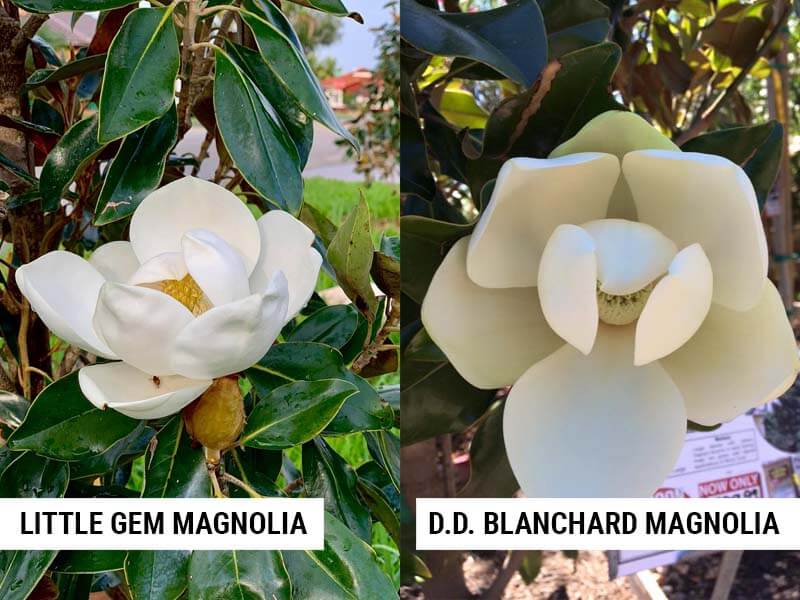 The Exmouth Magnolia also has a wider crown, which is almost spherical. Little Gem Magnolia, on the other hand, is narrower in shape. This means that if you need a shade tree, Exmouth Magnolia is a better choice. It also grows faster, which means you will reach your goal sooner.

In addition to the size of the crown, Exmouth Magnolia has larger flowers and leaves. And it certainly looks more decorative.

The last small difference is the color. Exmouth Magnolia has cream-colored flowers while Little Gem’s flowers are snowy white. 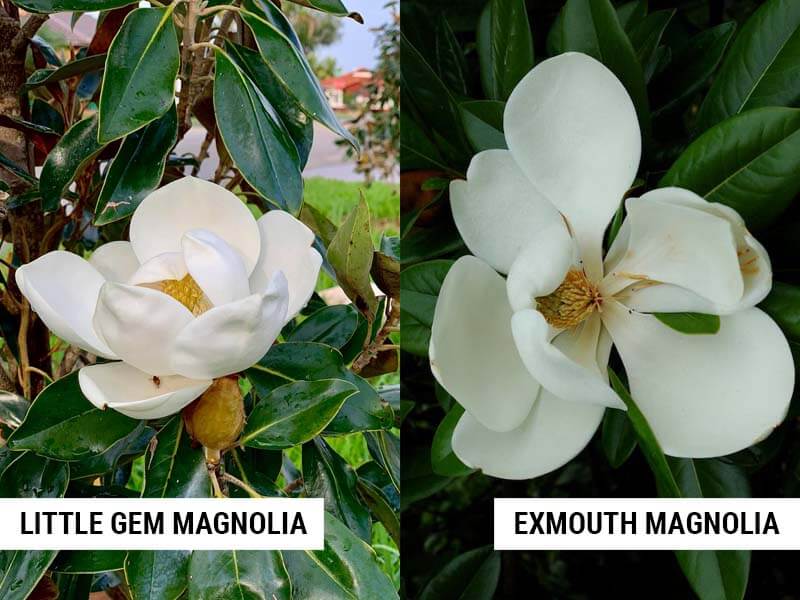 Another difference is the leaves, or to be precise, the underside of the leaves. Little Gem Magnolia has a brownish-green lower part of the leaf that is a little rough. Sweet Bay Magnolia, on the other hand, has a smooth, light gray underside.

A significant advantage of Sweet Bay Magnolia over its competitor is that it is much more hardy. It is recommended to grow up to zone 5 in the north, which means it is available to almost everyone in the U.S. 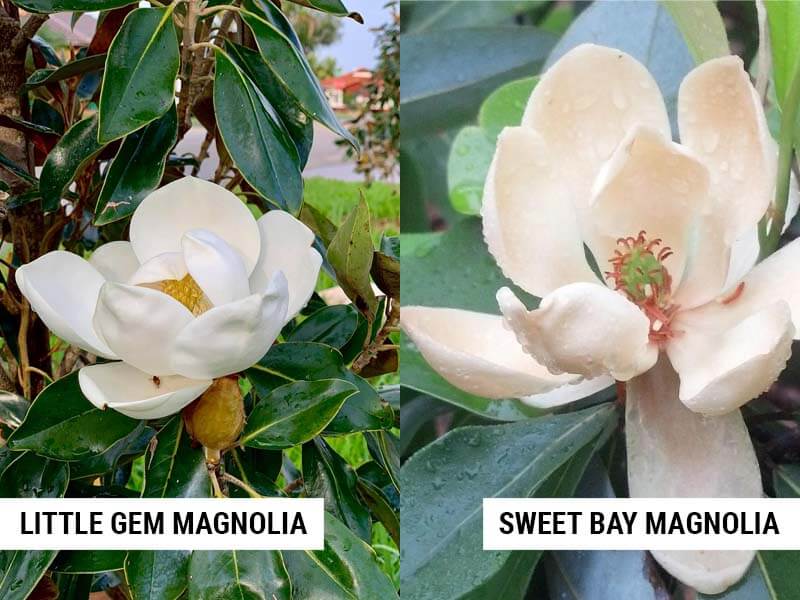 The size of each of these magnolias determines where they can be planted. Claudia Wannamaker Magnolia needs to be in a large yard because it cannot be planted close to buildings. Little Gem, on the other hand, is better suited to small gardens.

In addition, Little Gem can bloom repeatedly, which is different from many varieties. While Claudia Wannamaker Magnolia has no tendency to rebloom. 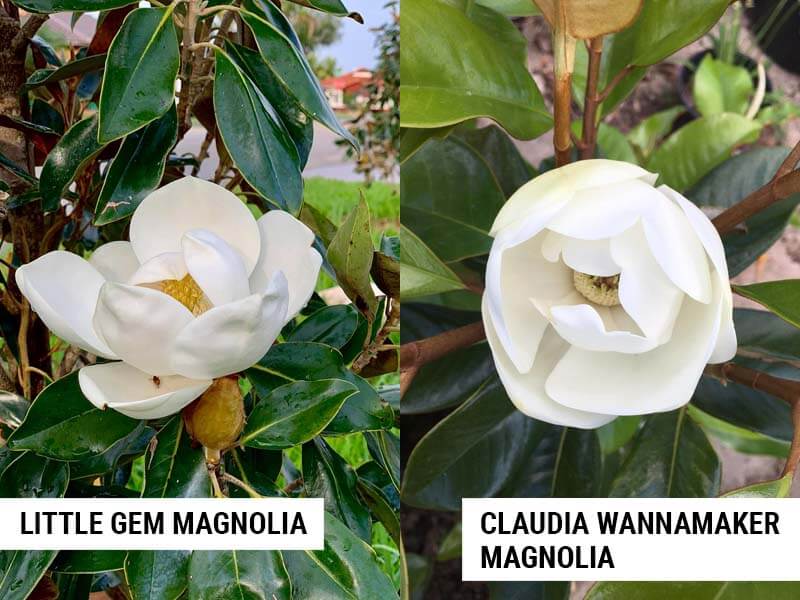