A blooming tree is a wonderful decoration for the garden. However, if the flowers are clustered in large inflorescences, it looks just fantastic. Not many trees can give such an effect, so tree hydrangeas have become very desirable these days.

But do hydrangea trees really exist? Why do sellers often add ‘tree’ to many varieties while they should have a bush shape? I will try to answer these and other questions today. 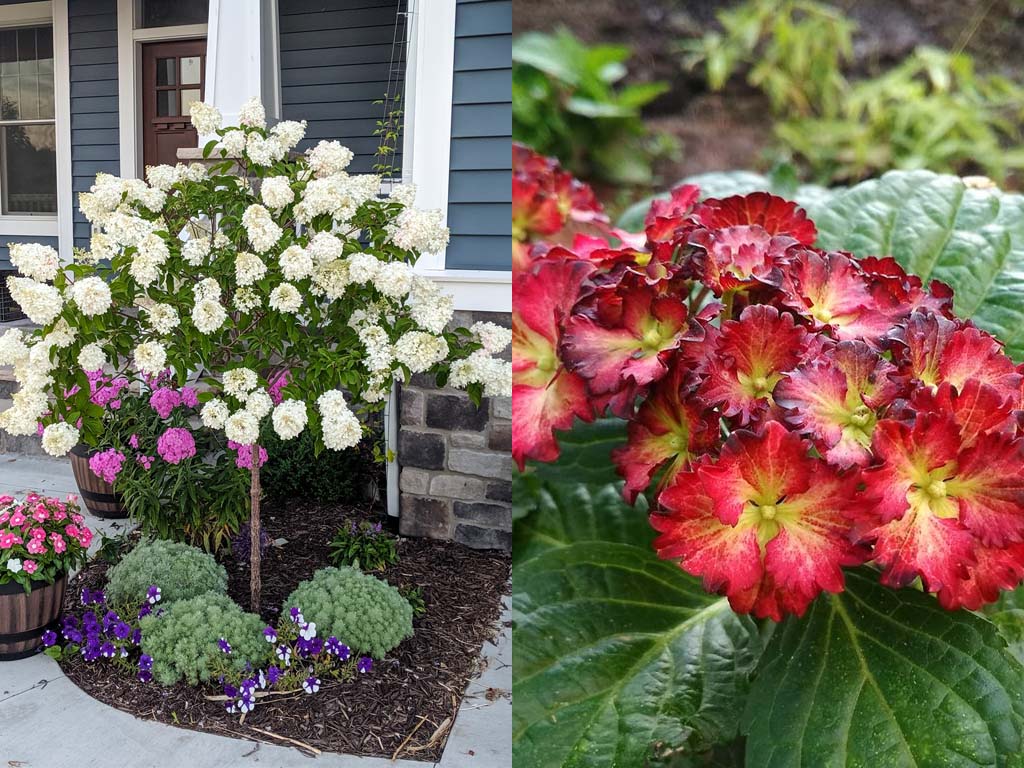 Which hydrangeas are trees?

None of the hydrangeas is a tree; they all grow in the shape of a bush. However, some can still be formed in the form of a small tree.

The only type of hydrangea that is capable of such a transformation is the Hydrangea paniculata. It lends itself well to creating the desired shape and does not form new branches from the root.

Other species of hydrangeas can not be grown as a tree. Even after a strong pruning, they will still form new branches at ground level and, as a result, will look like a bush again.

One of the most popular varieties is Limelight Hydrangea. In nurseries, these plants are grown as small trees 5-6 feet (1.5 m) tall. As a result, you can quickly get a dwarf tree that blooms with large greenish-white inflorescences.

Another impressive variety is Little Lime. From it, you can get an even more compact tree because this variety has an average height of 4 feet (1.2 m). The small size combined with the lime green color of the flowers looks spectacular.

Also, the petals’ tips may turn pink, which gives a special charm to Little Lime.

In addition to dwarf varieties, you can plant Hydrangea paniculata ‘Grandiflora.’ It is a large shrub that can reach a height of more than 20 feet (6m). If you prune it properly, you can get a big flowering tree.

Bush hydrangeas have much more varieties

One of the main advantages of bush hydrangeas is that there are a large number of unique varieties. Unfortunately, this is not available for tree hydrangeas, as their range is limited to Hydrangea paniculata varieties.

For comparison, you can take Miss Saori Hydrangea. This variety belongs to the species Hydrangea macrophylla and has lovely white flowers with pink tips. It can be compared with Hydrangea paniculata Vanilla Strawberry, which also has a pinkish-white color.

However, Miss Saori has several petals row, which makes her flowers lusher and richer in appearance. Besides, the petals’ tips have an unusual shape, which also adds to this variety’s uniqueness.

Another unusual variety among bush hydrangeas is Hydrangea macrophylla Arabesque. It has pink-crimson petals with sharp tips that are relatively rare among hydrangeas. Also, the petals are quite long and grow in two rows. Nothing like this you will get by planting a tree hydrangea.

And finally, it is worth mentioning Bristol Hydrangea. It has a yellowish center of flowers with ruby-red tips. The edge of the petals has a zigzag pattern. This effect makes the inflorescence just incredible and noteworthy.

In terms of various color combinations and flower shapes, bush hydrangeas are ahead of tree hydrangeas. Therefore, if you are looking for rare and unusual varieties, you should pay attention to bush hydrangeas, especially for varieties of Hydrangea macrophylla.

What pros and cons of tree hydrangea?

An indisputable advantage of the tree hydrangea is that you can plant other plants under it, such as hostas or coral bells. In this regard, you save space and can have more plants in the garden, of course, if you need it.

The second advantage is that a small flowering tree looks more elegant than a bulky bush. Also, the flowers will be visible at a greater distance because they will grow a little higher. In general, a tree that blooms with large flowers looks more exotic than a bush.

Often on the leaves of hydrangea, spots appear; this is the result of fungal disease. Often the cause of the disease is high humidity and dense planting. One of the signs of the disease is the yellowing of the leaves. If you have encountered a similar problem, you can find the solution here.

If the hydrangea does not have branches and leaves close to the ground where the humidity is higher (as in the bush), the fungus spores will have less favorable growing conditions.

Besides, the greater the distance from the soil surface, the better the air movement, which will also have a positive effect on the health of the hydrangea.

Despite the advantages, the tree hydrangea has disadvantages; namely, it requires constant pruning. To keep these plants in the shape of a tree, they need to be pruned every year; how to do this, we will talk later.

Another disadvantage is the price. A mature branched tree is more expensive than a bush. The price difference can be explained by the fact that creating a hydrangea tree requires more effort and time than growing a bush.

It is more challenging to create a tree shape

It is more challenging to maintain a tree hydrangea because its shape will continuously strive to turn into a bush. You will have to prune it at least once a year.

Hydrangea paniculata blooms on this year’s branches so that you can prune it in the spring. You can also not be afraid to shorten it too much. This is an energetic plant, and it can have many new branches and new flowers in a few months.

Many homeowners buy a tree hydrangea and hesitate to prune it after planting. As a result, the plant stretches upwards, and in the place where the trunk begins to branch, the leaves stop growing.

After several years of lack of pruning, the tree hydrangea becomes like an elongated bush on the single trunk. The bottom of which is bare, and the inflorescences grow on tall branches. As a result, it resembles a bizarre tree, and you will not find anything like it in nature.

To keep the hydrangea in the desired shape, all you need is to prune it at the beginning of the season. If necessary, cut the branches in half or even more.

In places where you cut a branch, at least two new branches will appear. As a result, after pruning, you will get many more flowers than before.

However, an unpleasant situation may arise here. With regular pruning and excess fertilizer, the tree hydrangea can form too many new branches and large inflorescences. All this will put a heavy load on the trunk, so you may have to create support for the plant.

Also, do not overfeed tree hydrangea. One top-dressing per year with slow-release fertilizers is enough. Also, mulch the surface around with compost.

Another problem is the suckers. Suckers are thin branches that are formed on the main trunk, and they do not grow leaves. All they do is suck up nutrients from the plant (hence the name).

To deal with these villains, you need to remove them frequently. It is best to do this in the fall so that they do not draw energy from the plant during the winter.