The main difference is that Hidcote lavender has a richer purple color of flowers, while Munstead lavender flowers are slightly pale. The clusters of Hidcote flowers are denser, which means that Munstead flowerheads not so tight.

Munstead lavender is half the size of Hidcote. Also the latter blooms earlier. Munstead also has better heat tolerance not only from Hidcote lavender but also from other varieties of Lavandula angustifolia.

Although both of these varieties belong to the same species (Lavandula angustifolia), they have a different origin.

Hidcote emerged in the early 20th century in Britain. The author of this variety is Lawrence Johnston, a military man, but later became a famous horticulturist. This cultivar has several forms, which we will talk about later.

Munsted also originated in the United Kingdom. The originator is Gertrude Jekyll. She introduced this cultivar to the general public in 1916. Thanks to its excellent qualities, Munstead received a royal award. Another name is Munstaed Blue.

But that’s only the beginning of their differences, and I have a lot more to show you. So, let’s go! 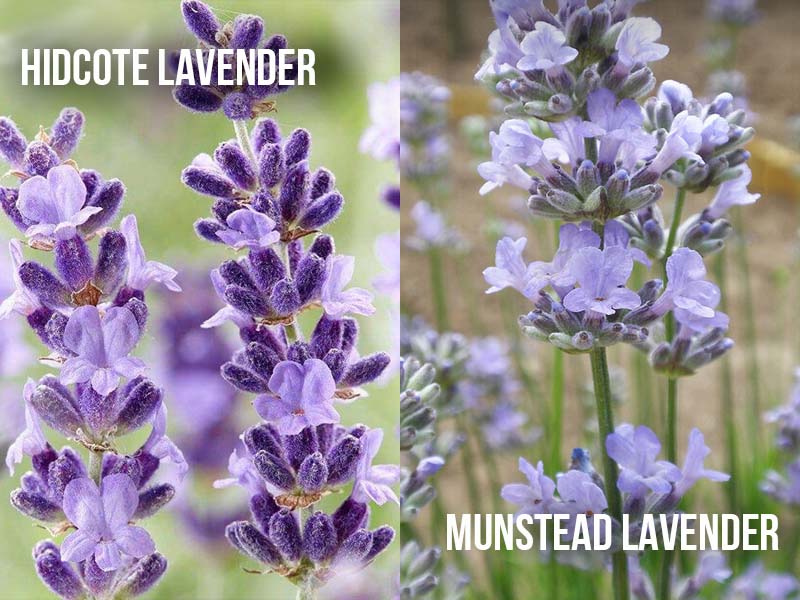 Flowering is the most significant difference between Hidcote and Munstead. The flower size is approximately the same, but the inflorescence and color are different.

Hidcote flower clusters are more compact, which means that the flowers are placed closer to one another. At the same time, Munstead has more ‘loose’ flower clusters. As a result, Hidcote is more expressive, and Munstead is more voluminous in terms of flowering.

The second significant difference is the color. Hidcote is a bright purple-blue color. Munstead, in turn, is pinkish-blue, and the color intensity is not as high as the competitor’s; that is, it is a bit pale.

From all this, it follows that Hidcote looks much better when in flower due to its compact inflorescences and bright color. Unfortunately, Munstead can not provide such quality flowers, so it clearly loses here.

Munsted is smaller than Hidcote. It is usually 12 inches high and 18 inches wide.

Hidcote, on the other hand, is 50% larger than its competitor. If you can get ideal conditions, this variety can be up to 20 inches tall. But under normal conditions in most U.S. gardens, it will be 18 inches tall and 20 inches wide.

As you can tell from the size, Munstead is a compact variety and is better suited to growing in pots. Not for nothing is its other name Munstead Dwarf.

If you want to use lavender as a low hedge, you may prefer Hidcote. It grows a little faster and is tall enough to form an excellent barrier.

The larger size is why Hidcote is used more often in commercial cultivation, as it can give a larger yield and is a bit more profitable.

English lavenders are considered early bloomers because they bloom sooner than French lavenders. But there are also differences between them in the timing of flowering.

In the case of a warm spring, Hidcote blooms first. This will be in mid-May and will last until mid-July. If the weather is not favorable, flowering may occur at the beginning of June.

Munstead, on the other hand, usually blooms in early or mid-July. That is a difference of about ten days.

Earlier blooms are not very good because plants can be damaged by late frosts, which in some states can occur in the second half of May. So if you live in the northern part of the US, keep that in mind.

Also, remember that to get good blooms, you should avoid using too much fertilizer. This applies in particular to nitrogen-rich fertilizers because they make the leaves grow too fast. At the same time, there will be very few flowers.

Also, lavender needs enough light to flower well. Give it at least 6 hours of direct sunlight, and you will be surprised at how grateful it can be.

These two Lavenders grow well in 5 and up to zone 9.

In scorching summers, even these heat-loving plants can suffer. This is especially true for Hidcote, which can even burn a bit in the extreme heat of zone 9.

On the other hand, many gardeners claim that Munstead has absolutely no problem with lots of sun and heat. So if you live in the south of zone 9, you should prefer Munstead over Hidcote.

Unfortunately, those of you living north of zone 5 will only be able to grow these beautiful plants in pots and hide them indoors for the winter.

Hidcote is considered a medium-sized Lavender and has another name, Hidcote Blue. The author of the variety was lucky enough to get two more types of this lavender.

The first was Hidcote Superior. This cultivar is more compact, with a height of 13-14 inches. It is directly comparable to Munsted in size but, like its older brother, has a more intense coloration of flowers.

The second variety is Hidcote Giant. It is much larger than its two ‘little brothers’, its height reaches 35 inches and the same amount in width. The flowers are also much more interesting than Munstead.

Hidcote Giant is an ideal candidate for a medium height hedge.

The simple conclusion drawn from everything written in this chapter is that Hidcote offers several different options, while Munstead provides only one. If you also consider that Hidcote flowers more beautifully, the choice becomes obvious.