There are two broad types of cucumbers, vine cucumbers, and bushy cucumbers, and both are very popular to grow yourself. When growing them they can get a bit crammed in, or you have been growing them from seed and they’re ready to go into the ground. When they’re replanted they can struggle a bit to adjust, so in this article, I will explain how to ensure they adjust well when they’ve been put into a new spot.

If the roots of the cucumber plant are damaged too much, the soil is at a different height, or they’re overly exposed to the sun and/or wind, they can get transplant shock. To alleviate transplant shock give them partial shade, protect them from the wind initially, and water them well. 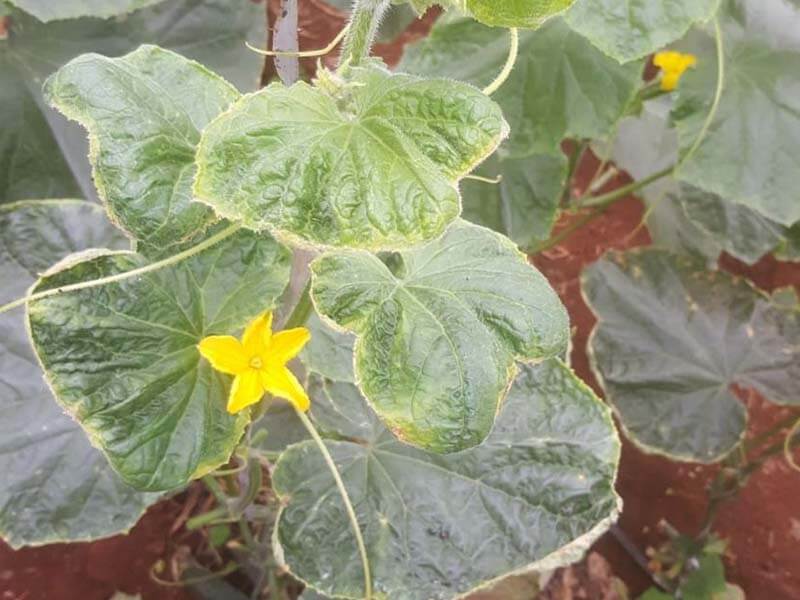 Be extra careful not to disturb the roots while replanting it

As you’ll know, the roots are one of the most important parts of a plant. They are very sensitive and have almost a 6th sense. For example, you may have noticed that two plants planted at the same time in different-sized pots will grow at many different rates. The same plant in a smaller pot won’t grow as fast as one in a larger pot.

Because the roots are very sensitive it’s very important to try not to disturb them at all. This isn’t always possible, but do your best to keep all of the soil around the roots, and try not to move the roots very much by moving or touching the root system.

When taking it out of its pot try to put it out in one big lump of soil. And when digging a cucumber plant up dig much wider around the roots than you think is necessary. This will give you the best chance of not moving the roots.

Use a root stimulator to increase root production

There is a specially formulated liquid called root stimulator. It comes in a concentrated form and is mixed with water and poured around the base of the plant. It’s very effective at stimulating root growth and comes very recommended by botanists and scientists for plants that have just been transplanted.

After a plant has been transplanted the roots can be slightly damaged, and are also adjusting to their new environment. Adding a root stimulator helps the roots to adjust to their new surroundings quicker and helps them recover from transplant shock faster.

Make the soil level the same as the cucumber had previously

You want to keep everything about the way your cucumber is planted after transplanting it. This includes how the roots are positioned and also the soil level. If the soil level changes for example if you bury it deeper or leave it sticking out of the ground more then it will require your cucumber plant to adjust to the new conditions.

This adjustment period stresses the plant and increases the impact of transplant shock. Therefore, take note of where the soil level is, and when replanting it keep it as close to what it was as possible. This is fairly easy to do.

But, you may need to adjust the hole you dug for it a bit to ensure the soil you put around will be the same level it was where the cucumber plant was previously. 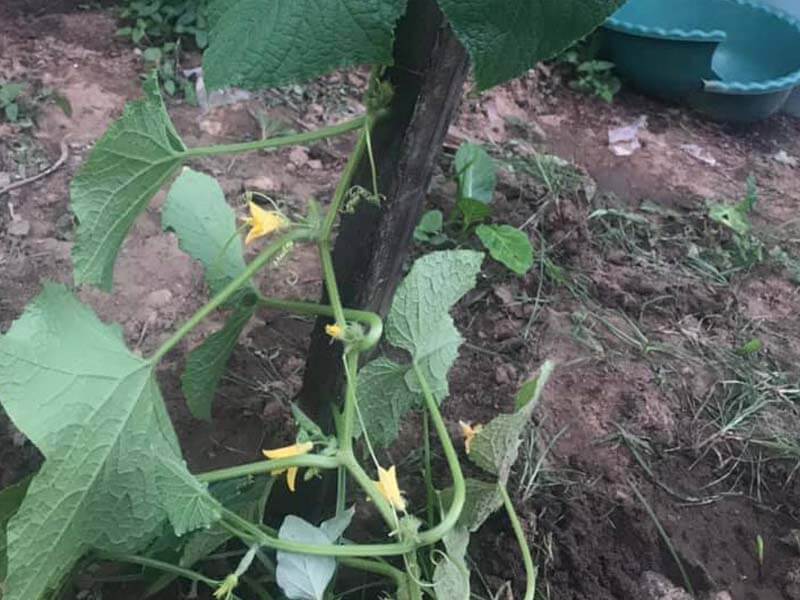 The cucumber drooped due to transplant shock.

Provide a lot of shade at first

But, when it’s weakened from transplanting, a lot of sunlight can dry out the stems and leaves. This can make it wilt more than normal.

Therefore, for a week or two after it’s transplanted it’s best to give it bright light but very little direct sunlight. A good option is to use a bucket with the bottom cut out. Putting it over the plant not only protects it from the sun but also protects it from the wind which can also stress it. And cause it to take longer to recover from transplant shock.

If you have a few cucumber plants, there is also shade fabric that can be set up with some pieces of wire or frames made out of branches or bendy wood from the hardware store.

Keep the soil moist and saturate the soil before transplanting them

When transplanting your cucumbers the roots can become damaged, or a little bit disturbed. Because of that, the roots can not function as well as an established plant. This means they can’t withstand periods where the soil is drier than normal.

For that reason, it’s best to give them plenty of water so they aren’t lacking. And have all the water they need. It’s also a good idea to completely saturate the soil before digging them up or taking them out of their pot.

This ensures the roots are fully saturated when they’re replanted, and you don’t need to worry about the water getting down into the lower roots.

Once, they’re established after a week or two, you can be less careful about making sure they have enough water at all times. And as you may know, the main sign that a plant needs more water is the plant will look tired. As if it’s drooping over.

Wind pushes and pulls on a cucumber plant. Generally, the wind isn’t too good for plants when they’re in perfectly good health. But, this goes double when they aren’t very strong because they’re recovering from transplant shock.

Putting up some form of a wind barrier can be a good idea if where you’re putting your cucumber plants does get a bit of wind from time to time. If you rarely experience any wind where they’ll be located then you won’t need to worry about this step. However, if you do get a bit of wind a few good options are to use: 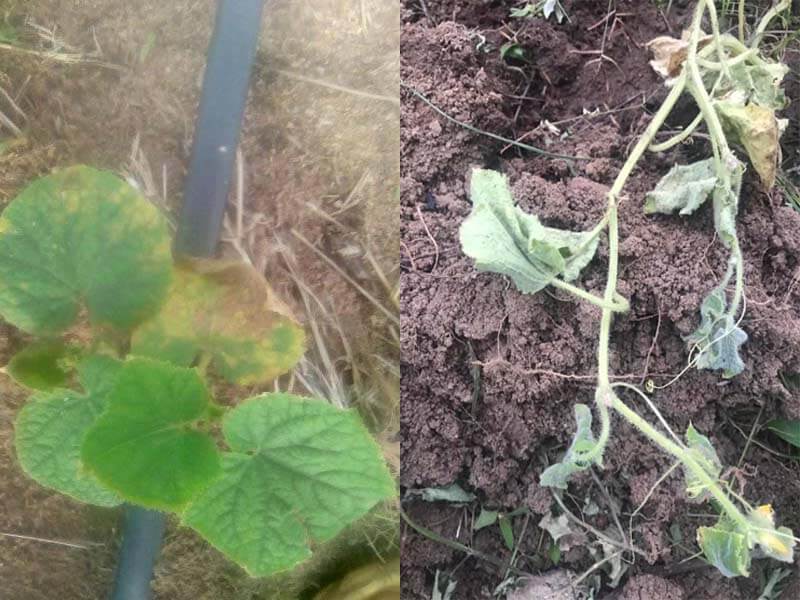 Cucumber leaves turned brown and wilted due to transplant shock.

Replant them as soon as possible

Ideally, when you dig out your cucumber plant or take them out of their pot you should transplant them immediately. This means you should already have a new pot or a hole dug for it. The longer it’s left out the more transplant shock it will experience. It’s likely you weren’t planning on leaving it out after removing it from its pot or digging it up. But, it’s something easy to overlook.

Mulch is well known in the gardening space, and in case you aren’t aware it’s grass clippings, leaf litter, wood chips, bark, or organic plant matter. This is placed around the base of the plant. Freshly tilled soil is often over-exposed to the sun and air. This makes it not as hospitable for insects.

Adding mulch provides a sheltered spot for insects, and protects the surface of the soil from the sun and wind. This causes it to remain moist for longer. As the mulch breaks down naturally the nutrients in it also seep into the soil and make it healthier.