Perennials often compete with each other for the right to occupy the garden. The same thing happened with the two plants we will be considering today. Here you will find as much information as you need to make the right choice.

Russian Sage has blue or purple flowers and Catmint can bloom in blue, white, or pink. In addition, Catmint is hardy than Russian Sage. 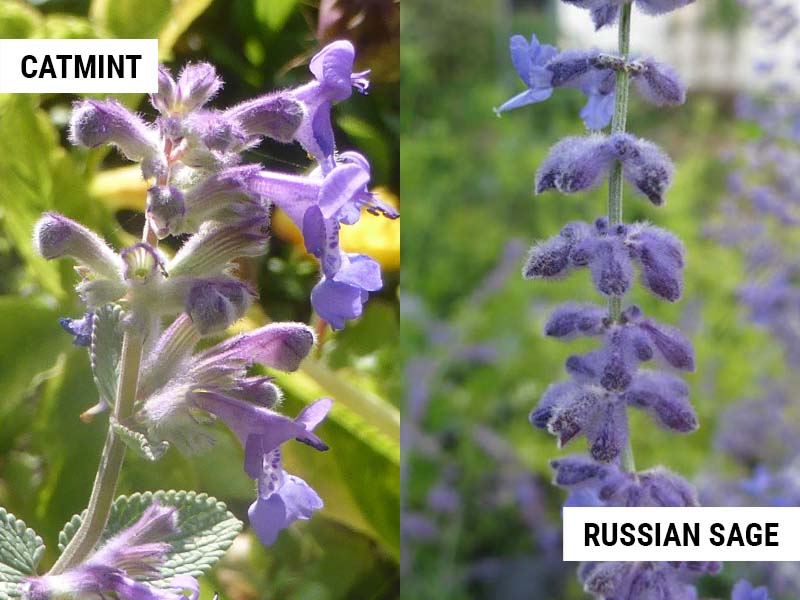 The shape and size of these plants have several differences.

Catmint has a slightly flattened and more rounded shape. This plant is usually no more than three feet tall. In colder climates, the height maybe even less. The plant is mostly 2 feet wide. The leaves grow more densely than a competitor.

Catmint looks flattened due to the leaves and branches not exceeding 1-1.5 feet in height. Up to 3 feet of this plant is reached by the flower stalks. Once they are dried out and removed, the plant becomes wider than taller.

Russian sage has tall inflorescences below which long leaf petioles are attached. As a result, the plant always looks taller and more voluminous than its competitor, but less dense.

Russian sage blooms are more voluminous. The inflorescences are attached to large stems that grow out of the ground. Leaves grow on the lower part of the stem. At the top, the stem begins to branch and flowers grow on these branches.

The density of flowers is not very high, which means that the distance between the flowers is quite significant. The result is a large panicle that looks a lot like the inflorescence of Hydrangea paniculata. The panicle can be up to 10 inches tall.

Catmint inflorescences are quite different. They are attached to flower stems that are almost not covered with foliage and are nearly half the height of the Russian sage. Also, the flowering stem has no branching, the flowers are attached to it on short petioles. The result is a fairly long but narrow inflorescence with a high density of flowers.

The flowers of both plants are about the same size. They are small, up to about 1 inch.

Russian sage has purple or blue flowers. There are some cultivars with different shades of these two colors, but this is where the color palette ends.

Catmint also has blue or bluish-purple flowers. But often the name Catmint is used not only for Nepeta mussinii but for the entire genus Nepeta. If you take this into account, many other colors will be available to you. You can find Catmint in white, pink, and even yellow. In this respect, the advantage is definitely on the side of the Catmint.

The smell of both plants is pleasant. Russian sage has a slightly more intense scent than Catmint.

Russian sage has sharper and more dissected leaves. The leaf is 2 inches long and 1 inch wide. There are almost no leaf petioles and the leaves are placed close to the stem. The leaf tips are elongated and very sharp.

The color of the leaves is green but maybe greenish-gray in some cases. The foliage is fairly thick and fragrant when crushed.

Catmint has considerably smaller leaves. They do not exceed 1 inch across. In addition, they are rounded and do not have a sharp tip. The color is almost always gray, which can change to green if there is not enough light. The foliage is also fragrant when rubbed.

A slight difference is that the Catmint leaf surface is fuzzy. Russian sage, on the other hand, has an almost smooth leaf surface.

Overall, the Catmint bush looks better due to its more rounded and compact foliage. Whereas Russian sage is more spreading and not as dense.

Catmint tolerates low temperatures better than Russian sage. This plant can be grown from the 4 USDA hardiness zone. That means it is available to almost everyone in the northern states.

Russian sage should not be grown north of zone 5, so not everyone living up north can have it in their garden. Which is definitely a disadvantage.

As for the south, the Russian sage has a slight advantage because it can tolerate the hot climate of zone 9. While Catmint can grow no further south than zone 8.

It follows that Catmint is more suitable for those living in northern states. And for southerners, Russian sage is better.

Another difference between Catmint and Russian sage is the need for sun.

Catmint can tolerate full sun as well as the penumbra. But for it to thrive, it needs at least 4 hours of direct sun. In northern states, Catmint must be grown in a location with at least 6 hours of sun.

Russian sage, on the other hand, requires more sun. In the south, 8 hours of direct sunlight is sufficient; in zone 5, it requires at least 8 to 10 hours. If you don’t give enough light to this plant, it may not bloom or bloom poorly. Also, the bush will be loose.

It is often difficult to find a garden spot with lots of light. So Catmint is best suited for a small garden with a high number of plants.

Catmint prefers moderately heavy soil. It could be loam or something similar. This plant also tolerates wet soil well, which means that root rot is much less common than with competitors. So you don’t have to worry about the drainage. But this does not mean that Catmint will grow in a swamp, a slightly moist soil will be best.

Russian sage on the other hand absolutely does not tolerate heavy soil. You definitely need to provide light and well-drained soil without stagnant water.

The next thing is the nutrient capacity of the soil. Russian sage grows well in poor sandy or stony soils. But Catmint prefers fertile soil, otherwise, it will not grow as fast.

Last but not least is the soil pH. Russian sage prefers alkaline soil, so soil pH should be over 7. It will certainly tolerate neutral or slightly acidic soils, but it will feel uncomfortable.

Catmint likes acidic soils best. A pH of 5.5-5.8 is ideal. Catmint can also grow in alkaline soils, but not as well as in acidic ones.