Thuja is a widespread coniferous tree. This genus has only a few species, but the number of decorative varieties is huge. Due to such popularity in many gardeners, especially beginners are interested in what time of year it is best to start growing it.

The best time to plant Arborvitae is the first half of Fall. At this time, the sun is not so intense, and overall the conditions are softer for the plant to take root easier.

It was a short answer, but like any case, there are many subtleties and nuances. Let’s discuss them in detail. I want to clarify that now we are talking about planting a thuja from a pot with no damaged root system. Other types of planting and transplanting will be discussed later in the article.

In the table, I briefly depicted in what months and in what Hardiness Zone it is better to plant Arborvitae. Of course, this is relative data, and time may vary from weather and when the first frosts came. 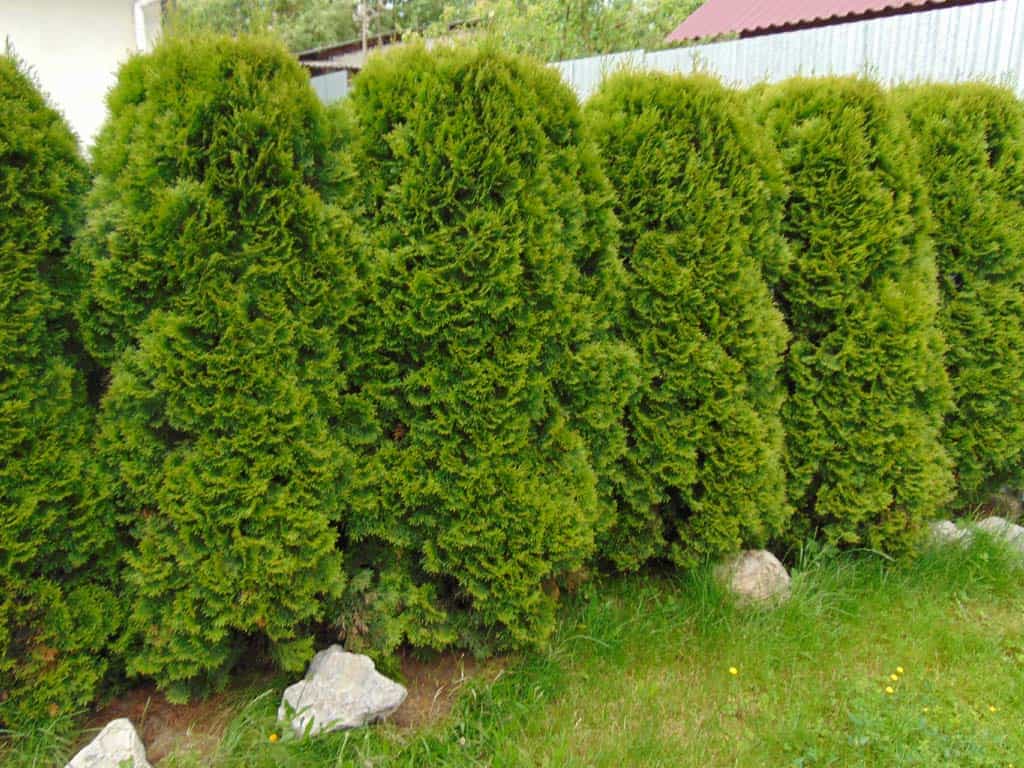 Also, once again, I want to clarify, the table shows the time for planting plants from pots in which the roots are not damaged.

If you do not know which Hardiness Zone you are in, check out the table at the end of the article. It says which zone each state belongs to.

In my opinion, it is best to plant in early autumn. Starting in late August and throughout September and early October, this is a time when a plant that has grown in a pot can be planted in the ground.

The idea is to identify the right conditions. In the first half of autumn, the sun is not as strong as in summer, so the plants will need less moisture to evaporate. So you don’t have to water it too often. In addition, Fall is generally a wetter season than others, so the risk of losing the plant from drying out is less.

The soil at this time is warm compared to spring. In warm soil, the roots develop much faster.

Another prerequisite for success is sufficient time before the first frost. It is important that you plant at least 30 days before frost. This time should be enough. I saw the roots grow in 15-20 days.

You can also plant Thuja in late Fall. If the plants do not have time to root, then they overwinter anyway. Most likely, everything will be fine.

I planted conifers many times in November, and in most cases, it was a success. Although in spring, they were slightly behind in growth in comparison with the plants that were planted in September.

However, everything is not easy here; in September, it is still too hot. When digging a plant, you will surely damage the roots. As a result, there is a high probability that the plant will not survive this.

Most experienced gardeners say, and I agree with them that transplant thuja can not be earlier than the first decade of October. However, there is a problem here, and the remaining time may not be enough to take root. The plant with damaged roots winters worse.

This problem can be solved with the help of two tricks. The first trick is that in the spring of 8 months before transplanting, you need to cut the roots with a shovel. Do not dig it and just cut the roots in the ground around the plant. Step 4-6 inches away from the crown (from the tips of the branches).

By autumn, the plant adapts and will better survive the transplant.

The second trick is that you need to shade the plant until winter arrives.

The next favorable time for planting Thuja is spring. March is already warm enough, and it is possible to plant Thuja from pots into the soil. If you live in the southern states, then you can plant in the second half of February. For the northern United States, this may be the end of March or the beginning of April.

The basic condition is that the soil is not frozen. It is also better than the movement of the juices has not started yet, ie, the plant should be in hibernation. If this condition is not met, then it is not terrible, there remains a high probability that the plant will take root.

The advantage of spring planting is that at this time, a young growth is formed. These young shoots require a lot of moisture and nutrients, and this stimulates the vigorous development of the root system.

If you did not have time to plant Thuja in early spring, then you can do it later. For example, in April or even May. Thuja begins to grow later than other conifers, so the second half of spring is also a good time. However, I have had a few cases where the Thuja planted in late spring did not take root and die.

Now let’s talk a little bit about the downsides of spring planting. The first is that the soil in the spring is still quite cold, and in such conditions, the roots do not develop very willingly. In addition, very often, there are spring frosts, which also does not contribute to rooting.

The other downside is that the sun shines brightly in the second half of spring. Even if you plant Thuja in early spring and the frosts will be by April, then the plant will not normally take root. And let’s say the weather will change dramatically to warm and sunny so the plant may not have enough root system to receive and evaporate the required amount of moisture.

I noticed that the plants in the first year after planting from the pots into the ground give a very large and vigorous growth. In the following years, the growth decreases and becomes normal. This is the danger, the plant begins to produce large shoots quickly but may not have time to develop enough roots.

All this will not necessarily lead to negative consequences. In some cases, everything will be fine; in others, the plant will lose some branches and greens. However, in some cases, the Thuja dies.

Planting of Thuja with bare root in spring (transplant) should be done as soon as possible. When you dig a plant, you will definitely damage some of the roots. If you do this in the late spring when the young shoots have already appeared, then the Thuja can die.

I recommend replanting Arborvitae in late February or early March no matter what climate zone you live in. As soon as the frosts recede immediately transplant it.

If you follow my recommendations, the plant is sure to take root. The plant may not release young growth in the first year after transplanting, but it will survive, and next spring will begin to grow.

Also, as I wrote above, you can trim the roots with a shovel 9-12 months before transplanting. In this case, the root system will be more compact, and the transplant will be better.

Summer is not the best time to plant conifers. Most nurseries claim that it is possible to plant Thuja from the pot in the summer, but I do not fully agree with it. If you do this, then most likely the plant will survive.

But my experience shows that many plants planted in the summer die. Not all plants, but a considerable number. What I can say for sure is that the risk of losing a plant is increasing.

The reason why plants root worse in the summer is too much sun and lack of moisture. When you plant a thuja from a pot, it gets plenty of room to grow and begins to grow intensively. The root system does not have time to provide the plant with water, and the sun dries the plant.

It may seem that watering can solve the problem. However, it is not so easy here. First, to ensure normal conditions, you need to keep the soil moist. If you water the plant not often but with plenty of water, you can overwater it. It is better to water more often but with a little water, agree that it is quite troublesome.

If you still decide to plant Thuja in the summer, do it early or late summer. The end of August is even better than the spring for the northern US. Also, if possible, shade the plant until autumn.

It is not possible to dig and transplant Thuja from one place to another during the summer. If you decide to do it, stop! Thuja with damaged roots will die in the summer heat. Neither shade nor watering will help here. Almost all my attempts to transplant conifers in summer failed. There have been some successful cases, but this is more luck than the rule.

Winter is the second unfavorable time for planting Thuja. The most obvious reason is that the earth is frozen at this time. However, I planted Thuja several times in the winter, and in most cases, everything ended well.

But even if winter is warm enough and you can dig a hole for planting, I still do not recommend doing this, especially if you are new.

First, if you plant a thuja from a pot into the soil and hit severe frosts, then soil pressure can damage the roots. This can cause root rot. Since, at this time, the plant is dormant, it will not be able to heal wounds and will most likely die.

Secondly, winter is usually high humidity. If you plant Thuja at this time, it may not adapt to new conditions, and the roots may rot.

So if you do not have the experience, it is better not to plant in winter. I do not claim that planting, for example, in December, will kill the plant. It may all end safely, but there is a big chance of a negative result.

Also, I do not recommend replanting Thuja in winter. Damaged roots can rot during the winter, and you will lose the plant. In winter, when it is worth replanting is the end of February.

Finally, I want to say a few words about the size. If the Thuja is large enough, then the planting time is extended. The larger the size of the plant, the greater it’s supply of moisture and nutrients. This will help her to take root more easily. In other words, larger plants can be planted at a less favorable time.

More information on the Hardiness zone can be found on Wikipedia.