We are all worms. But I believe that I am a glow-worm. ~ Winston Churchill

You know how much I love a bargain. Yes, almost as much as I love worms.

So a few weeks ago, my two most favourite things collided into a completely fantastic event. 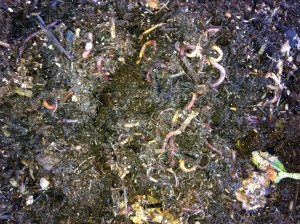 I should start by saying I already have three worm bins. They are the can-o-worms, worm cafe style designs. Stackable trays, creating layers of worm goodness.

They work a treat. I tend to underfed them, especially because it seems a worm farm can sour almost overnight in this heat. That means I actually stockpile food for them. My three bins couldn’t keep up with my output. I was looking for a better solution, scouring worm blogs for a higher volume worm solution, but nothing seemed to be available.

Then I found it in the classifieds.

At $110 dollars, the worm bin was about the price for what you would pay for a new Can-o-Worms kit from the hardware store. But this one is HUGE. Three meters long. A meter deep. A meter wide. Apparently full of worms. And, I had just the spot to put it.

But I didn’t want to get my hopes up. It could be full of sand. It could be sour. I would only find out when I got there.

I recruited the necessary help, which was of course Dad and my ever obliging Husband, plus trailer. They are my dream team, who have previously featured in my Upcycled Potting Bench post.

The worm wee drains from the bed into a waiting bucket.

Once at Dan the Worm Man’s house, I was not disappointed. Dan had taken good care of his worms. The bin was indeed, full of worms. It smelt sweet and was full of fine castings.

To put my bargain into context, 1000 worms in castings cost $50 at my local hardware store. (Even then, its a bit of a gamble, as you don’t know what you have until you open the box.) I would estimate that my bin is currently holding a volume of 40,000-50,000 worms. That makes the value of the worms themselves $2400 dollars!

Getting the bin on the trailer, then home was a big job, but so worth it.

It is an ingeniously simple design. Constructed from corrugated iron in a timber frame, the base has a layer of blue metal covered with fine weed mat for the worm we to leach and filter through. The bin itself is then placed on a slope so the wee can then drain into a pipe and be collected by a bucket.

I have made some minor improvements. I covered the sharp edges of the metal sheet with some old recycled rubber garden hose. Handy Husband has installed some struts on the interior of the lid to prop it open securely, to ensure it doesn’t come crashing down on my head. Because it is located at the front on my home, I have also put a latch and lock on the lid.

I have since emptied all my worms into the big bin, where they have settled in nicely. They are so much happier in such a large volume of soil. A few weeks on, the worms are thriving. They are chomping through all our waste, plus the fruit waste from playgroup.

In a few weeks, I might set up a little cottage business and sell “dig your own” worms through the classifieds. My front garden renovations need funding!