“It takes a lot of skill to be able to grow food sustainably. Its an art form. We need to raise agriculture up to another different level like they do in Europe where farmers are on the same level as engineers and doctors… because the food that we eat is the most important thing in our lives.” Antonio Roman-Alcala, Farmer/Activist Alemany Farm, San Francisco, CA

The fact that it is almost the end of the year has me reflecting on the start of the year.

So much has happened in my garden!

While I am not yet laden with home grown produce, it seems likely in the coming months, certainly in a few years. What I have learned along the way has been priceless.

But, it has also been busy, and a bit expensive. Setting this garden up has been an investment of time, cash and grunt! Had we had more of all, it may have all happened faster!

Since I had otherwise been neglecting my blogging, (usually instead deciding to be in the garden during our fine spring weather) I thought I would recap the years endeavours and tally up our monetary investment to date. 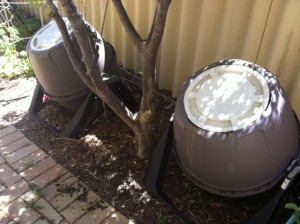 These were one of the first purchases I made for the garden. At $90 each, they were more pricey than the stand alone bins, but worth the extra. They churn out about 4-6 loads of compost each bin, each year depending on what I feed them. If I had to pay for the same volume of compost, it would cost roughly $200 or more if purchased by the bag. Which means they have paid for themselves within that time. 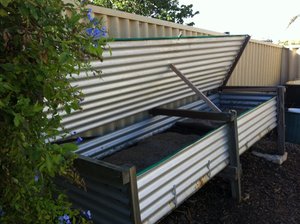 I found my mega-worm farm in the classifieds for $100. A total bargain. It’s fantastic. The worms that it contained would have cost me over $1000 to buy commercially, not to mention the construction of the farm itself. I have since sold the worms through the same classifieds for $20-30 for approx 2000 worms which earned me roughly $500 in the months since I have had it. A 400% return on investment isn’t bad for what is essentially my garbage.

A bit untidy, but the Greenhouse is finished!

Husband converted the awkward space in the back garden into a lovely greenhouse space for me to work in. A few hundred dollars worth of timber, cement and shade cloth and voila! Done.

Inside, it is furnished with finds I have scraped together from kerb collections, recycling centres and bits inherited or donated from family gardens. Except for the disco mirror ball. That cost $2.50 from the bargain store, but I think you will agree, it finishes the space beautifully.

My Very Own Seed Bank

The drawers, in place, cleaned up and ready for a new purpose.

Another classifieds find that I just had to have. My own seed bank is a retired library card index, complete with library book smell. It is solid timber, with all original fixtures. It sat in the garage of a carpenter, storing all his bits and bobs for almost thirty decades before it became mine. Despite being covered in years of wood dust, it is in excellent condition, taking the pride of place in my home. I hope it will collect a lifetime’s worth of open pollinated seeds. At $750, it wasn’t exactly cheap, but then again, quality has a price.

Here we are at the big one. The raised front garden beds. Taking into account the costs of tree removal, stump grinding, skip hire for rubbish and sand removal, plus machine hire for levelling, we are already taking a few thousand dollars before the beds have even arrived. 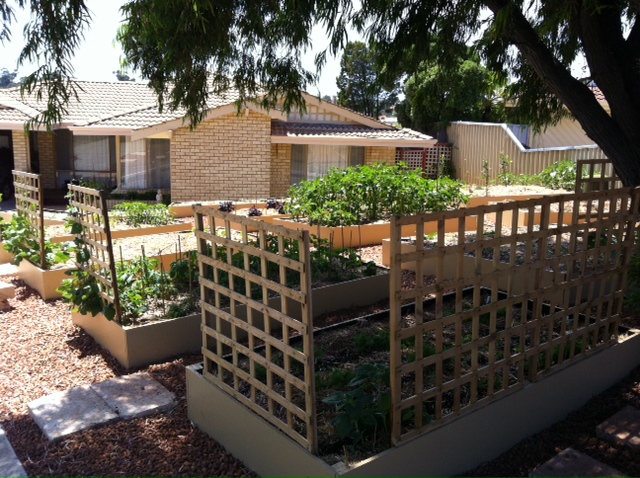 …here is the view from the top of my driveway….

The formply beds cost over $3000 in materials, add a further $800 for enough pea hay and mushroom compost to fill them all up. We used leftover paint from another job to paint the beds. The weed mat and the gravel to cover the area cost another $600.

So roughly the front raised beds cost a grand total of over $7000. As a comparison, we were quoted upwards of $10,000 to have the area coved with AstroTurf. Now we have a dozen raised beds to grow edible produce with zero food miles! I usually spend about $70 a week on fruit and vegetables, so it’s going to take a few years to recoup that investment.

All covered in mesh, and finished. Coop de Ville, ready for the Girls to move in.

Finally, we have the chickens. We purchased them a coop online that arrived flat-packed and ready for assembly. At $250,
It was half the price of the one at our local pet shop and a design that was better suited to our space. Husband then incorporated an existing fence to build the chooks an attached run, and secured them inside safely with a covering of chicken wire and shade cloth. All up the run cost another $300.

The chickens themselves are Hi-line browns, and I purchased them from the pet store at 3 weeks old for $15 each. I also purchased feeders and water containers for about $50. Their laying pellets cost about $8 for a month’s supply.

I share greens from the veggie patch with the chooks. The girls have yet to lay, but when they do, I would expect a dozen eggs a week. I pay $6 for a dozen free range eggs a week, so the chicken coop will take a few years to break even in a monetary sense.

The plants and seeds!

A batch of seedlings planted from bulk grocers.

Of course, one must include all the plants and seeds I have collected in the last year. A Diggers membership at the start of the year cost $69 and was worth every penny. Of course, you dont need to be a member to purchase the seeds, but you do get discounts, free seeds and access to their online resources making it worthwhile.

Also, I scout seeds from practically anywhere! I have bought them at local farmers markets, bulk grocers, supermarket soup mixes and from websites near and far. I have raided the gardens of friends and family to propagate plants for free. I have had a few disappointments, but otherwise, I am willing to keep trying to grow as much as possible from seed. Everything I grow is open pollenated, heirloom heritage varieties.

Next week, I’ll share what projects we have planned for 2013 which I can barely wait to get underway.